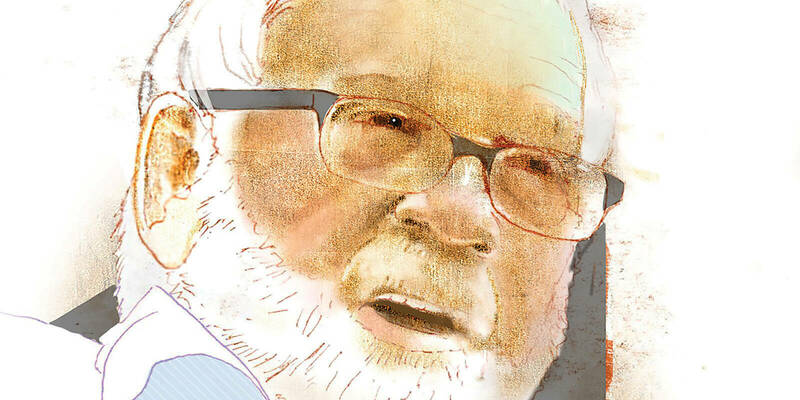 It was nearly 20 years ago. Bill Ryan ’56 was on the phone. Earnest, committed, righteous, dogged Bill Ryan, one of my better sources in the community of advocates fighting for reform in Illinois’ criminal justice system.

I was a news columnist for the Chicago Tribune, and every so often I took up the causes of wrongfully convicted inmates in order to see justice done and to remind readers that prosecutors, judges and juries do make mistakes from time to time, so it’s a dangerous folly to give them the power to execute people.

Those fighting for the abolition of capital punishment in the state had momentum at the time. A series of high-profile exonerations had prompted Illinois’ Republican governor to declare a moratorium on executions, because it was hard to tell who among the condemned might actually be innocent. And here was Bill Ryan suggesting I write a column championing the cause of one of the openly guilty ones.

But I heard him out. Because there’s no one I’d met as a reporter whose heart I trusted more than his.

Slowly, insistently, Ryan made the case that the governor should extend mercy to Renaldo Hudson. Of all people.

In 1983, when he was a troubled 19-year-old, Hudson had murdered World War II veteran Folke Peterson during a robbery attempt and been sentenced to death. No one had beaten a false confession out of Hudson or concocted misleading evidence and testimony against him, unlike the prisoners I usually wrote about.

But he was also the very picture of a changed man, Ryan argued: Remorseful, a model prisoner since undergoing a religious conversion eight years earlier, an informal counselor to other condemned inmates and to troubled youths.

I couldn’t say no to Ryan and ended up writing, “Renaldo Hudson in 2002 is in almost every respect a different person than the vicious, angry” teenager he was in 1983. “Our culture has long observed a connection between confession, repentance and reform, and at least a small measure of redemption. And that connection is as much part of our secular and religious traditions as an extreme reluctance to execute the innocent.”

Ryan had not always sympathized with those who’ve committed unspeakable crimes. In fact, as a career advocate for abused, disadvantaged and neglected youths in Kentucky, Florida and Illinois, he’d seen up close the horrible things that people can do to children, and he’d felt more than satisfied when the perpetrators were packed off to rot in prison.

That all changed in the winter of 1995 after his adult daughter Katy gave him a copy of Dead Man Walking, Sister Helen Prejean’s bestselling account of serving in the Louisiana State Penitentiary as a spiritual adviser to two condemned men convicted of rape and murder.

“I wonder what I would be like if I had grown up without” the right protections and support, Prejean wrote. “What cracks would have turned up in my character?”

“That book did something to me,” Ryan says. “I never really stopped to think that those people in prison were human, too, with complicated lives and often horrible stories of their own. . . . On impulse I picked up the phone and called her. She answered.”

In their conversation, Prejean suggested Ryan attend a meeting of the Illinois Coalition to Abolish the Death Penalty, a citizens group fighting for abolition against what then seemed like long odds.

Ryan is one of the few people I know with the moral imagination and persistence to seek and recognize the humanity not just in one such evildoer, but in scores of them over the last quarter century.

At that meeting, Ryan learned that the family of Hernando Williams, one of the men next scheduled for execution, couldn’t afford to attend his clemency hearing in the state capital some 200 miles south of Chicago. “So, again, acting on impulse, I went and picked them up and took them down there,” he says. “Then the next week, I took them to see him in prison.”

Williams had confessed to kidnapping Lamaze instructor Linda Goldstone by throwing her in the trunk of his car, then raping her repeatedly over 36 hours before shooting her to death. Ryan is one of the few people I know with the moral imagination and persistence to seek and recognize the humanity not just in one such evildoer, but in scores of them over the last quarter century.

And he’s virtually the only person I know who takes seriously the passage in Matthew 25 where Jesus says “I was in prison and you visited me” when reminding his followers that “whatever you did for one of these least brothers and sisters of mine, you did for me.”

Where does this passion come from?

Ryan, who will be 88 in August, grew up on a small farm near Maysville, Kentucky, an Ohio River town an hour southeast of Cincinnati. He was the only boy among his parents’ six children and was such an active kid — “always hopping around” — that the family called him “Toad,” a nickname that stuck through his entire adult life.

At Notre Dame he lived Zahm Hall, Morrissey Manor and Dillon Hall, and was on an intramural basketball team with football legend Paul Hornung ’57.

“I majored in political science, but I wasn’t the best student,” he says. “I spent a lot of time figuring out how to drink beer and not get caught.”

Unsure what he wanted to do after graduation, Ryan enlisted in the U.S. Army and served three years in the Counter Intelligence Corps, then ended up back in Maysville where, upon the advice of his parish priest, he became a schoolteacher.

In 1960 he married Mary Julia O’Hearn, also a native of Maysville, and they had four children in six years. One of them is Molly Ryan ’84, a Colorado attorney.

“When I taught school, I would always recognize the forgotten kids,” Ryan says. “The ones who were shunted aside, abused, neglected. So I helped the priest set up some special programs for them.”

This experience inspired him to take a job as a counselor with the Kentucky Department of Child Welfare, which in turn prompted him to earn a master’s degree in social work at the University of Louisville. This credential plus his energetic commitment to the department’s mission fueled several promotions. He was ultimately named deputy commissioner for child welfare in Kentucky and developed a national reputation as a champion for community-based treatments for juvenile offenders.

Illinois’ Department of Children and Family Services hired him away in the mid-1970s, and he managed child welfare services there for some 20 years under various directors and governors. After a short stint in Florida working for that state’s Department of Health and Rehabilitative Services, he returned to Illinois to oversee youth advocacy at Jane Addams’ Hull House Foundation, a renowned nonprofit agency in Chicago.

It was then that Prejean and her book changed his life. He became a frequent visitor of prisons and a leader in the political, legal and journalistic effort that resulted in a moratorium on executions, a commutation of all 167 death sentences and, in 2011, the statutory abolition of capital punishment in Illinois.

Ryan, who still speaks with a soft Kentucky drawl, started “Stateville Speaks,” a quarterly newsletter written by and for inmates throughout Illinois. He was instrumental in the publication of Lockdown Prison Heart, a 2004 collection of 38 winners of an inmate essay contest based on the prompt, “Who am I and what can I do better?”

I helped judge that contest, though I did occasionally find myself uneasy with Ryan’s emphasis on redemption and his fight against the gratuitous harshness of life sentences without the possibility of parole.

Life without parole is a fallback for most capital-punishment abolitionists due to what I’ve referred to as the “if only gap,” as in “I’d be against the death penalty if only I could be sure that killers would never go free.” Opinion polls consistently show that support for the death penalty drops 15 to 20 percentage points when respondents are offered the alternative of guaranteed life sentences.

Ryan, who sees the humanity in everyone, has never given up the fight for reinstituting parole in Illinois, which was abolished in 1978. And once capital punishment was safely off the books, I came over to his side.

He also never gave up fighting for Renaldo Hudson, whose death sentence had been reduced to life without parole in the mass commutation of 2003.

Eleven years after I wrote that first Hudson column, Ryan was back tugging on my sleeve, suggesting a follow-up.

I didn’t take much convincing this time.

“In the last decade,” I wrote, “Hudson has redoubled his efforts at personal redemption, earning a high school equivalency degree in 2006 and a college associate degree in 2008, graduating from a community college program in substance-abuse counseling in 2012 and becoming certified as a literacy tutor. . . .

“If we believe at all in rehabilitation and earthly redemption — if our misty evocations of the power of change, the majesty of forgiveness and the necessity of second chances are anything more than empty rhetoric — then we must release Renaldo Hudson.”

The state ignored my demand at the time, but Ryan and Hudson’s lawyers kept pleading his case. And in September 2020, Governor J.B. Pritzker finally granted his release.

“I celebrate Bill Ryan on so many levels,” says Hudson, who is now the director of education for the Illinois Prison Project, a nonprofit organization that advocates for inmates and their families. “He came to us, he cried with us, he laughed with us, he told our stories. Without him, I wouldn’t be here.”

“Bill is truly, truly one of the world’s great humanitarians,” says Rob Warden, the former director of the Center on Wrongful Convictions at Northwestern University’s law school. “He ranks right up there with Mother Teresa. I don’t know that he’s worked any miracles, but his selfless dedication to helping lost souls behind bars should qualify him for canonization.”

Noted Chicago capital defense attorney Charles “Chick” Hoffman is one of many figures in the Illinois prison justice movement seen praising Ryan in the Emmy-nominated 2020 documentary Stateville Calling, which chronicles his life and efforts.

“Bill never seeks the spotlight,” Hoffman told me, “but you can bet that if there’s a bill pending in Springfield on the issue of parole, the sponsors of that bill were lobbied, pressured, cajoled and otherwise persuaded by Bill Ryan.

“And if parole does come back to Illinois, it will be due largely to the ceaseless efforts of a folksy octogenarian who, like Abe Lincoln, moved from Kentucky to Illinois seeking a more humanistic approach to society’s problems.”

Ryan’s wife, Mary Julia, died of complications from Alzheimer’s disease in 2016. Five years later, he got a call from Cathy Blanford, a widow who lived near Ryan in Chicago’s western suburbs and was active in the criminal justice reform movement through her church. They agreed to meet at a restaurant — “Look for the fat, old white guy,” Ryan told her — and the rest is history. She still lives nearby, but as “partners” they plan to move into a senior-living facility together when the time comes.

Ryan now shares his home with artist Arkee Chaney, 78, who had nowhere else to live after he was released from prison in the summer of 2020 after having served 31 years for his third armed-robbery conviction. Ryan keeps up with his children and 12 grandchildren, three of whom are actively communicating with prisoners, carrying on the family business, so to speak. And though his prison-visitation schedule is now lighter, he’s keeping up the fight on behalf of the forgotten and often reviled.

Eric Zorn was a columnist at the Chicago Tribune for 35 years and now writes “The Picayune Sentinel,” a weekly newsletter on Substack.