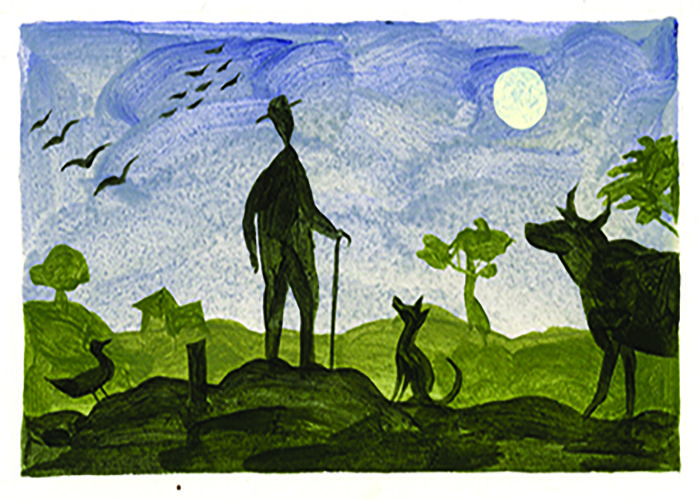 Editor’s Note: Bob Swift lived in the same house for almost 97 years. Swift’s death last month brought to mind this 2018 essay by his neighbor Mark Phillips, reflecting on the dairy farmer’s stories of work and survival.

The maples crimson, oaks yet green, ash already naked. Margaret and I and our Brittany spaniel, Jenny, are crossing high pasture along yet higher woodland. The pasture drops precipitously to level ground where it is crevassed by a stony stream and separated from the barnyard and lawns of the Swift place by a post-and-wire fence line. Below us, cattle whip themselves with their tails, laggardly since fly season is past, and occasionally lift their heads to check our progress. Over the decades, we have walked this place with our children, now grown and living far from home, and one after the other with our earlier dogs, Franny and Nectar and Gracie. And now with Jenny.

We used to dream in straightforward lines on our hikes.

My neighbor Bob Swift is probably watching television in his parlor down there, as he usually is these days when I visit him in the homestead. Nine decades ago, in the same house, he was born on the kitchen table. His health is no longer good enough for him to be a full-time dairy farmer — the cattle are owned by his daughter Dawn — and that’s what bothers him the most about his age, that he can no longer work from morning to night, baling hay, or cleaning cow stalls, or plowing fields, or chopping corn, or tending fence line, though, on some cool, clear days, when his breathing is less wheezy and joints not so pained, he still helps Dawn and her husband with the barn chores.

Many stories of work and survival will be lost when Bob dies. When he was a boy, he would hike up the big, steep pasture and then uphill more through forest and then curve downward along cropland owned by a different family to reach the one-room schoolhouse where reading, writing, civics and arithmetic were taught. Each year in early spring when the garlicky wild leeks had poked up from the woodland humus, he ate of their oval greens and smooth white bulbs on his way to school so that his breath would foul the room and the teacher would send him home, where gladly he joined his father in the fields or barn. He remembers when he and his father would use a crosscut saw to cut their firewood. He remembers when electricity first came to these hills, shortly after he returned home from the vast bloodshed of World War II. He has sowed and reaped for nine decades on land where the Seneca of the Iroquois Confederacy once hunted with bow and arrow and from which one of his ancestors left to enter the bloodshed of the Civil War.

Eventually Bob would witness the scattering of land over the caskets of his grandparents and parents and siblings — and, even so, in his many years before that especially hard day in spring 2017 when land was scattered over the casket of his wife, Elaine, he would hold his four children and dozens of grandchildren and great-grandchildren, new life in the arms of someone formerly a newborn.

I recall some of Bob’s stories each time I cross his pasture.

His stories loop mine.

Five years ago, Margaret had brain cancer and was left with permanent cognitive damage. She has difficulty remembering what happened only hours earlier, and tends to confuse what occurred today with what she did several days ago, but her long-term memory is better than mine. If she dies before I do, I will lose my bearings on this land of stories. It is late in the evening as we hike the pasture and she asks whether I know when the next full moon will be. I don’t. She then asks whether I recall the night when Hope, our daughter, was a toddler and noticed a full moon and pointed at it from the picture window in our kitchen.

I shake my head.

I do. But I reply, “No.” I desire to know the story again, from her, as we move forward together.

“It was fall.” Margaret glances back and forth between the land ahead and me. “She didn’t know how to say it. We bundled her up and took her outside. We already had snow.” Although she is slightly out of breath from our hike, her voice rises with annoyance at my apparent failure of memory. “She was so excited and kept pointing up and calling the moon bakah. You must remember? Don’t you?”

Surely we have hiked the pasture at least 50 times over the years — just for the view. The first was while we were dating and Richard Nixon had resigned the presidency to avoid impeachment for high crimes; we hiked it after Bill Clinton was impeached for lying under oath about having Oval Office sex with a 22-year-old intern; and we hike it now when our President is a proud bigot, mocks the handicapped, boasts about his sexual assaults on women, and has a man-crush on the dictator of Russia. The economy and the land have changed, but not the prevalence of scoundrels in our government, and it could be that the American people have not changed, either. Perhaps, as an old saying has it, we get the government we deserve.

Yet here on upper pasture, under a generally clear sky and in the mingled odors of timothy and fallen leaves and cow dung and the dusky shrilling and rasping of crows, jays and blackbirds, no politics.

We can see several houses along the low, winding black thread of road and also see two people out in a yard, perhaps raking leaves, gender and skin color unrecognizable so far away, humans tiny and ethereal on the ancient land. I suppose they are sweating as they rake. The air temperature feels to be in the 60s, despite the season. Although we see none, crickets are calling to each other; it sounds like thousands of them, so many that for a while I stop noticing the birdcalls and the grassy crunching of my footsteps; the crickets sound like heavy rain first striking dry fallen leaves. Now that the sun is behind the lowland forest that forms some of the western border of the pasture, out of the west, over the treetops, streaks of red flow and coagulate. We turn, hastening toward home, our breathing harder, enjoying the urgency as the cattle below us make their way to the barn.

Jenny lopes and loops ahead of us, her ears and tongue flapping like small flags, glancing back periodically to see if Margaret and I are keeping up. Although her joy appears tireless, Jenny has a leaky heart valve, a consequence of her heart physically enlarging as it works harder in her old age. The same can happen to a human heart, and — who knows, who with certainty can say otherwise — it might be that all human hearts can enlarge better, and more than physically. At least how can I say otherwise? As Margaret and I and our dog rush ahead of darkness, here where our shared years have seemed a miracle, more, more, we hope for more.

Mark Phillips lives in southwestern New York State. This essay is excerpted from Love and Hate in the Heartland: Dispatches from Forgotten America, published this spring.