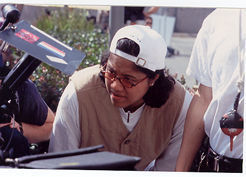 Forget the red carpet. While working on their first feature film, All About You, writer and director Christine Ashford Swanson’94 and her husband, producer Michael Swanson ’93, quickly gained experience in the realities of Hollywood.

A week before production on the independent film was to begin, the musician/actor cast as the leading man had to drop out. So novice director Christine was forced to re-cast the role. After filming ended, the owner of three songs used in the movie asked for more money. The Swansons couldn’t afford the higher fees, so Christine commissioned three news songs and had to reshoot three scenes. And don’t even ask Michael about agents or unions or distribution.

The Swansons spoke to students at Notre Dame and screened All About You as part of the “Artists in April” series sponsored by the Department of Film, Television and Theatre. Their romantic comedy has been a favorite at several film festivals, winning, among other awards, the grand jury prize at the 2002 Hollywood Black Film Festival and the audience choice for best domestic film at the Chicago International Film Festival. “Unfortunately,” Christine says dryly, “you can’t equate audience reaction to dollar signs.”

Nor to marketing and distribution deals. Because distributors weren’t lining up at the door of their independent production company, Faith Filmworks, Michael is working on distribution himself. The movie should begin showing in Chicago and Detroit theaters in spring 2003, then move to a limited release across the country. A soundtrack of the original R&B music used in the film also will be available. (For release dates and places, check www.allaboutyoumovie.com)

Although the sweet romantic comedy appears to score with audiences, Christine’s choice of subject doesn’t score high in the film industry. “It pains me to see the state of black films today,” says Christine, who dislikes the violence and negative images she sees as the norm for Hollywood films, particularly those featuring black characters. “We don’t have any images that represent our community as a whole,” she told The New York Times in an earlier interview.

As moviemakers, notes Michael, the Swansons’ goal is to “do good quality work with integrity.” And, adds Christine, “In our films, people can keep their clothes on.”

That’s certainly the case in All About You, which is being sent to the Motion Picture Association of America for a rating.

Michael guesses the film will receive a PG. “The niche audience for our movie is probably women — and not just African-American women,” he adds. “It deals with a universal story that just happens to have a black cast.” The love story doesn’t ignore physical attraction, but concentrates on two vulnerable people slowly building a relationship. Renee Goldsberry and Terron Brooks are the captivating leading duet, but such supporting characters as LisaRaye (from the film The Players Club) and Debbie Allen, famed choreographer, director and actress, may be more familiar to theatergoers.

While Michael is concentrating on the marketing and distribution of_ All About You,_ Christine has moved on to a project for HBO. She’s writing and eventually will direct a two-hour movie about a televangelist. Michael will be an executive producer, but he’ll be involved in other ways, too. “Michael has a great eye for editing,” Christine says. “He rips my scripts up.”

But that’s not necessarily a bad thing. Christine learned that lesson while an MFA student at New York University’s Tisch School of the Arts. Her experience there, she says, “afforded you an opportunity to fail.” Students would show their projects, she explains, and then gather to commiserate. She repeats an imaginary conversation: “Yeah, my film sucked — and yours did too.” To audience laughter, she notes, “Everyone faces the criticism.”

Christine chose to pursue film studies at NYU after hearing director Spike Lee speak at Notre Dame. That’s when the idea of being a director became to her a possible career instead of a fantasy. “It clicked for me,” she says.

The Swansons intend to continue their work on independent films — Christine says she needs to get at least one more romantic comedy out of her system before moving on to different genres. But those future projects, they both stress, probably won’t be what the Hollywood film industry prefers to produce. The current hot property, says Christine, “is anything comedic with a role for a rap star. But things do change. You never know.”

While they learn — and hope to influence — some of the whys and wherefores of the film industry, the couple is at home in Pasadena, California, with their son, Cole. They’ve chosen to avoid jumping into the Hollywood social life. “We don’t go to a lot of parties or industry events,” says Michael. They have, however, found a welcoming Christian community in Pasadena, and, says Michael, have begun to make friends and gain more contacts among film workers.

Now that they’re a bit more savvy about the Hollywood industry, says Christine, one lesson stands out: “You only have power to the degree that you have success.”