In the weeks before my grandmother died she grew smaller and smaller, until by the time she died she was the size of a bird. Her hair was white and she lay in a white bed in a white room. The building she was in was also white and there were nuns and nurses in white who sailed silently through the white hallways. It seems to me that no one ever spoke during that time.

My grandmother’s voice had departed this world before she did, and she was all eyes and bones, and she and my mother stared at each other and no one said anything, and I played in the corner of the room with sticks and feathers. Sometimes my mother let me go out on the grounds of the building, and I would wander around amid the thin trees and dry brittle grass looking for sticks and feathers. 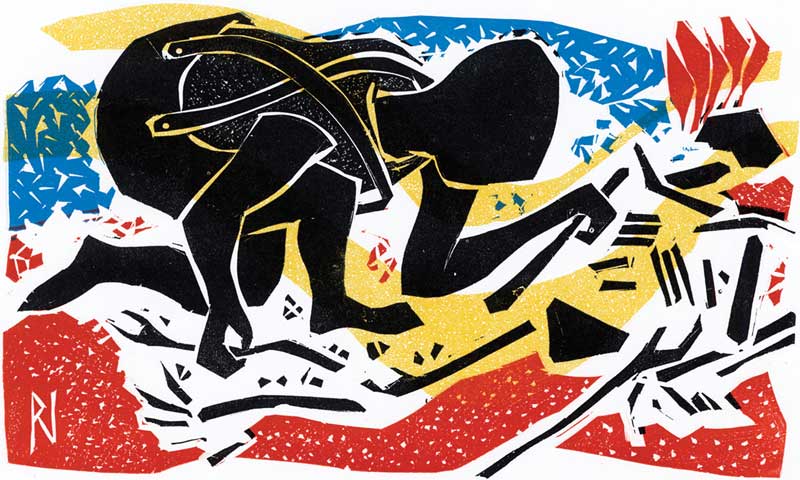 It seemed to me that my grandmother was mostly sticks now. Her eyes were huge, and she could see you no matter where you were in the room. Sometimes when I wandered outside, I thought she could see me through the walls. The windows in her room had white curtains. She was dying in the summer, so the curtains fluttered and floated in and out of the windows all the times my mother and I were there. No one ever closed the windows day or night that I remember, and I wondered why birds did not fly in and sit companionably on the edge of the bed staring at her silently, like my mother did. My mother was made of sticks and stones also.

My father said my grandmother would never die because you have to acquiesce to death, and she would not acquiesce to Jesus Blessed Christ Himself if Jesus came into her room and asked her politely. Jesus wore white after He died and came back to life and walked out of the tomb in which no one had been laid. Mary Magdalene said so, and she was an Eye Witness, as my father said. When he said those words you could hear the Capital Letters. My father said the gospels would be much improved if someone had deposed Mary Magdalene properly in the first few days after the Incident.

My father said the women in my mother’s family had wills so adamant and granitic that you could get a fire started by using flint against their wills to get the necessary spark. My mother said that the spark of life was slowly ebbing in my grandmother and that we would be derelict in our duty if we did not go daily to witness and escort it from this troubled vale. Every time we went her eyes were bigger and her body was smaller and everything was whiter.

The building was near the sea, so when you went out through the brittle grass and into the huddle of the trees looking for sticks and feathers you could smell salt and mist. My father said death is like the sea, because people are swallowed quietly and are never seen again and there is no mark of their passage other than what you remember. I remember wanting to get as far away from my grandmother’s enormous eyes as possible and walking out of her room as soon as my mother nodded permission and running out into the huddle of the trees and sitting there in the shadows, playing with sticks and feathers.

I cannot remember that I ever sat by the edge of her bed, or took her fragile hands in mine, or bent to kiss her enormous frightened eyes, or did anything except run away as soon as possible into the huddle of the trees. When Jesus Blessed Christ died, everyone ran into the huddle of the trees except Mary Magdalene. My father said Mary Magdalene was a remarkable woman with a granitic will and a love bigger than the ocean, and she ought to be acclaimed more than all the poor muddled apostles put together.

After my grandmother died my father said everyone is so sad, but we should be thrilled that she is now reunited with her clanswoman Mary Magdalene, and that probably all the flinty women in history live in the same building in heaven where they can start cooking fires if necessary by using their granitic wills. Probably that building is so brilliantly white, said my father, that it can be seen even here on earth, if you look for it closely. Probably that is the star that sailors look for when the sea is near to swallowing them and they have one last appeal to make. Of course they would appeal to Mary Magdalene. Wouldn’t you? Everyone else runs into the trees, but she would run right toward you in your hour of need and be there smiling at the edge of the bed as you awake.

Brian Doyle is the editor of Portland Magazine at the University of Portland and the author most recently of a novel, Mink River.