Anna Seitz Ciannello is causing a scene. All 6 feet of her, jumping up and down as if she’s on a trampoline, pumping her fists, staring intently at the TV in the bar. 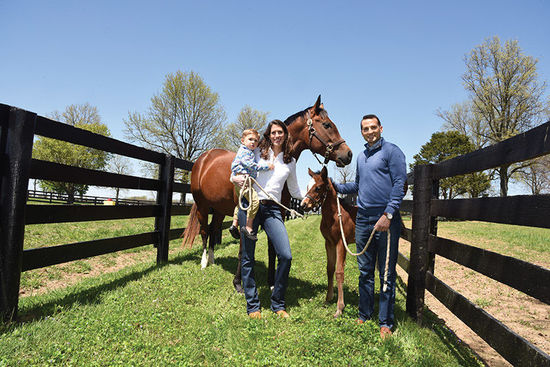 Ciannello ’03 wasn’t able to be at Arlington Park, the track outside Chicago where her horse was running that day in 2014, but friends caught her celebration on video. They shared it with a couple of cable TV networks for horse-racing enthusiasts and the clip went viral.

“Even though it was really embarrassing, it shows why we are in this crazy game,” Ciannello says of her moment in the spotlight. “There is nothing better than the thrill of winning a horse race. I always apologize to people because something takes over me, and I have this out-of-body experience when my horse is in the lead at the top of the stretch.”

Ciannello gets such a thrill from thoroughbred racing that she’s made it her mission to expand its community, from owners to fans. She says the sport has a reputation for being the domain of wealthy men, and she wants to change that perception.

“You read about these sheikhs from Dubai who own racehorses, and it’s not anybody you would ever meet or get to know,” she says. “We try to make it very inclusive, so anybody can get involved.”

“We” is Ciannello’s racing syndicate, It’s All About the Girls, which coordinates groups of women who combine forces and funds to buy horses. The idea grew out of a conversation with friends from Notre Dame. They were interested in owning a racehorse, but none of them could afford it on their own, since racehorses can sell for $60,000 or more — and cost as much as $50,000 each year to train, transport, insure and maintain. So they pooled their resources, purchased a filly, and named her I’m Already Sexy.

“She had so many fans at the track, because people could relate to her and us,” Ciannello says. “It wasn’t a millionaire who bought this horse, it was just a bunch of young people who all went in together. Everybody threw in maybe $500 or $1,000 and we bought a racehorse. It just so happened that she was really good.”

With this first success as inspiration, Ciannello decided to create a formal ownership group. During her four-year stint working as an assistant to trainer Todd Pletcher, she had noticed plenty of women cheering in the grandstands. These days her syndicate gives them the chance to get involved on the ownership side. Although no one keeps official records, Ciannello and her leadership team think theirs is among the first all-female horse-racing syndicates.

The group has 150 members, who own nine horses in the United States, Australia and Ireland, with plans to expand to France and England. They organize outings around race days, and pre-race parties often feature mimosas and Kentucky Derby-esque hats and dresses.

Members, who each hold at least a 5 percent stake in a given horse, name each new acquisition as a group. They make suggestions and vote, and the result typically has a feminine touch. Four Inch Heels, Appletini and Yes to the Dress followed I’m Already Sexy. Spark Joy is an homage to organizing consultant and bestselling author Marie Kondo’s method of keeping only those household items that bring joy.

The horse, of course, brings them all joy.

The group also provides networking and camaraderie. “People all over the world are connecting and networking, and it is very fulfilling to see how, through the love of horses, we’re able to meet all these amazing women, and their families and friends,” Ciannello says.

You could say Ciannello was born to love horses. She was raised in Versailles, Kentucky, on Brookdale Farm, which is known for breeding world-class racehorses — including the 2012 Kentucky Derby winner, I’ll Have Another.

Her family still runs Brookdale. Ciannello and her husband, Evan, live there with their two-year-old son. “Frankie already loves horses,” she says. “He goes right up to them and knows how to be around them.”

Ciannello — who went by her full name, Marianna, at Notre Dame — felt the call of horse racing as a career after graduation. After years of following horses on the racing circuit, she craved stability. She returned home to work at Fasig-Tipton, a thoroughbred auction house.

Her work with It’s All About the Girls is a side venture, but it’s having an international impact. This spring Ciannello spoke in South Korea, where interest in women’s syndicates is growing. She serves on the board of the Thoroughbred Women’s Network, a mentorship organization for women in the industry. And she’s involved in talks to be part of a reality TV show about horse racing.

“If it opens up the industry to a whole new audience and gets people involved, then I want to do it,” Ciannello says. “Because we desperately need new owners and new fans, and for people to go out to the races and bring their kids and families.”

Maura Sullivan Hill is a writer and editor in Chicago. She was an intern at this magazine and has written for Loyola Magazine, Holy Cross Magazine and Cosmopolitan.