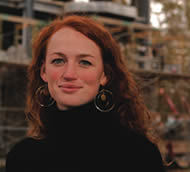 You never know where in the world you might find Molly Kinder ’01. For that matter, she’s often not really sure where she’ll turn up at any given time.

“I only plan the next step,” says the 29-year-old Buffalo, New York, native whose post-graduation path thus far has taken her to India, Pakistan, Liberia and both coasts of the United States, including a stop in Cambridge, Massachusetts, to pick up a graduate degree from Harvard University’s Kennedy School of Government.

Wherever she is, one thing is for sure — she’s hard to miss. It’s not just that she’s a tall, striking redhead, although that’s difficult to ignore. It’s her passion — for life, for service, for changing the world — that make Kinder stand out in a crowd.

“What initially inspired me was Catholic social teaching,” Kinder says, crediting her Notre Dame experience with introducing her to the principles that helped her find her way.
Beyond that, she suspects it’s genetic.

“It’s gotta be something in my DNA that I love challenges,” she says. “I need to always have a new goal and something that I throw all my energy into.”

Case in point, her historic turn during her senior year as the first female member of Notre Dame’s Irish Guard, which since its inception in 1949 had been all male, largely because of a 6-foot 2-inch height requirement (Kinder stands 6’3”). Breaking the guard’s glass ceiling drew criticism from some traditionalists, but Kinder forged on, letting her intuition be her guide.

“I’ve learned to just trust that inner voice,” she says. “The more you learn to trust and get to know yourself, [the more] you just know what you want to do next. I don’t worry about failing. You gain confidence going through challenges.”

Her stint with the Irish Guard made Kinder a permanent figure in Notre Dame history, but it was not her only noteworthy accomplishment as an undergrad. She also was active in the University’s Center for Social Concerns and volunteered in Chile, Kenya, Washington, D.C., Mexico and Appalachia, all before collecting her degree.

Kinder, who says she never had a 10-year plan — and still doesn’t — packed up after graduation and headed to Portland, Oregon, to volunteer for Catholic Charities. Then it was on to the Center for Global Development in Washington, D.C., where she co-authored the book Millions Saved: Proven Successes in Global Health. This collection of stories about global health programs is now required reading in dozens of public health programs.

After a stop in Seattle to work for the Bill and Melinda Gates Foundation as a policy and finance consultant, Kinder’s journey next took her to India and Pakistan, where she held positions with the World Bank as a consultant on poverty reduction, energy and infrastructure.

Her whirlwind world tour took on new meaning when she traveled next to the African nation of Liberia, where she worked for the government and as a consultant on poverty issues for the U.N. Development Programme. While in the country, she was profoundly impressed by Liberia’s president, Ellen Johnson-Sirleaf, who Kinder says inspired her to start thinking about politics back home.

“Our country is thirsty for a woman leader,” she says. “I feel so passionate about women being decision-makers in many capacities.”

Upon returning to America, Kinder joined the nonpartisan Clinton Global Initiative (CGI) as deputy chair of the organization’s poverty alleviation working group and took time off during the recent presidential campaign to get out the vote for now president-elect Barack Obama.

Since landing back on U.S. soil, Kinder has made quite an impression on colleagues who firmly believe she is going places.

“I hope that one day she will be president of the World Bank,” says Jane Wales, who hired Kinder at CGI. Wales, the CEO of the World Affairs Council/Global Philanthropy Forum and vice president of the Aspen Institute, applauds Kinder’s sense of strategy and direction, as well as her strong leadership skills.

“The joy she takes from each step forward spreads and motivates others to give their all,” Wales says.

Finding herself at a juncture and looking to figure out that “next step,” Kinder is starting to give serious thought to government work, hoping to blend her passion and background in international development to help shape U.S. policies.

So could the next step for this Domer perhaps be a run for office?

“I don’t know if the answer is yes, but if the right opportunity arises, I would strongly consider it if that felt right to me,” she says. Such a run would be a ways down the road, however, since right now Kinder says she feels strongly called to service at the national level.

“This is an extraordinary moment for America and for the entire world,” she says. “I can think of no greater honor than the opportunity to serve our country in the Obama administration.”

Still not quite ready to put down permanent roots, Kinder is content for now to go where life takes her, even if it means cat-sitting to help pay the bills and never really knowing when she’ll see her Washington apartment.

“At some point I probably will be a bit more stable,” she says. “I absolutely want to have a family. And I understand when you have a family your life changes and it’s not about you.”

For now, there’s a lot more world out there. And Kinder is only too pleased to make its acquaintance.

Julie Flory is associate director in the Notre Dame Office of News and Information.