That unusual affinity can be traced directly to the time each has spent as a resident assistant in Alumni Hall under the tutelage of rector Father George Rozum, CSC, ’61, ’80MSA.

The elder Krach came to Notre Dame in 1979 because of his father’s infectious enthusiasm for football. He was assigned to Alumni Hall, where Father George had been rector for a year. Daniel studied microbiology, prepared for medical school and played backgammon and bridge with his friends in Father George’s social room. He loved the spirit and camaraderie in the hall, he says, so when he became a senior he applied for and was given an RA position and soon moved in to room 234. 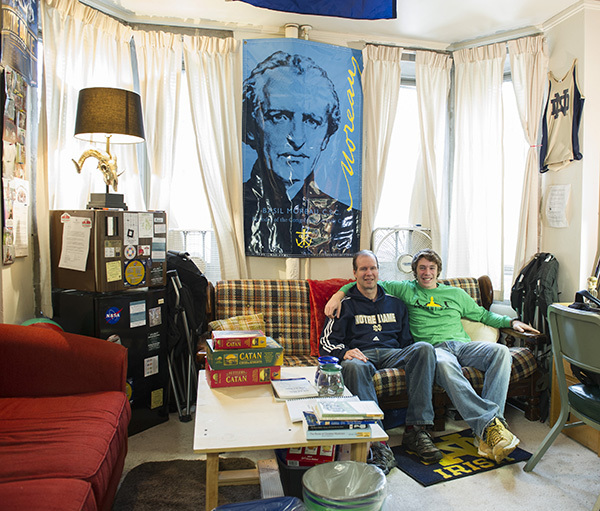 “I had two really good RAs during my freshman year, and I really appreciated them taking the time to get to know me and help me out,” says Daniel, an ophthalmologist in Fort Wayne, Indiana. “I wanted to be an RA, particularly with freshmen, so I could help them assimilate to college as well as the RAs did before me.”

To Daniel, being an RA wasn’t a chore. While many of his friends moved off campus to “throw keggers,” Daniel preferred to spend time with first-year students, priests-in-residence and other RAs. And Alumni Hall’s central location meant easier treks to biology labs, the dining hall and the Basilica, so he was happy to stay on campus.

Although Father George favored law and order, he also wanted to make sure Alumni residents had a good experience. Daniel says the RAs translated this policy as having fun while enforcing the rules. One evening on duty Daniel and another RA were chatting with Father Dan Jenky, CSC, ’70, ’73M.Th., the priest-in-residence, who occasionally would bring over artifacts from the Basilica for students to see. When they heard a celebration that was getting out of hand, the RAs borrowed a few items from the priest and raided the party. Wearing 12th century Turkish helmets and chain mail, and wielding ancient swords, the costumed enforcers sent their boisterous classmates back to their rooms.

When Patrick received his acceptance to Notre Dame 28 years later, Daniel called Father George and asked if Patrick could be placed in Alumni Hall — he wanted his son to live in the “best dorm around.” Patrick chose to major in biology and as a junior prepared his medical school application to Indiana University just like his dad. He also submitted his name for consideration to be an RA. Again, Daniel called Father George and recommended his son for the position.

So now Patrick is an RA in Alumni Hall, living in room 234, keeping watch over freshmen, just as his father did. He echoes his father in his gratitude to his own RA, who guided a young student through tough classes and suggested activities he should try.

And, like his father, Patrick says having fun and socializing with his fellow Alumni Hall Dawgs is still part of the RA mantra.

“[In Alumni] we have Dive Night, where we get as many people as we can together and go jump off the high dive at the Rock on Wednesday nights,” Patrick says. “We dress up in different costumes, like patriotic stuff or cowboy outfits, and crank up the music and have a good time. As an RA I get to lead this and come up with the themes every week, and it has just been such a fun way to let off some steam and bond with classmates of all ages.”

Then there’s that sword stuff.

When Father George celebrated his 75th birthday last year, Dawgs traveled from across the country to attend his surprise party at Notre Dame’s Morris Inn. The night hit a high note when at midnight Father George used a massive sword — not, however, the same one Daniel used to break up the party three decades ago — to slice his birthday cake. To Patrick, the celebration exemplified how loyal the Dawgs are to their dorm, their hallmates and their rector.

The soft-spoken Father George still uses “cheat cards” to memorize the names of freshmen before they arrive on campus so he can welcome them by name. His presence has been a mainstay in shaping the Krachs’ experiences at Notre Dame. “The ambience, the rector and the community are all still there,” says Daniel of Alumni Hall, “and I think that’s something special.”