“And I heard that if you walk around the lakes in a figure eight holding hands and then he kisses you under the arch, you guys are going to get married!”

I think I rolled my eyes so hard that I saw spots when I heard that. Eighteen years old with a massive chip on my shoulder and a serious attitude problem, I was slipping out the side door of my new home, Lyons Hall, when I heard this excited chatter about the dorm’s infamous arch. The two girls talking, whom I’d met briefly during Frosh-O, waved hello to me — which I tactfully ignored as I threw my headphones on and lit up a Marlboro 27.

I was not the typical Notre Dame freshman.

I grew up in Mexico, and watching my country dissolve into a cartel la-la land had turned me into a bit of a cynic. I preferred the term realist, but in hindsight, I was too jaded about the world to simply enjoy being a teenager. Beyond that, I wasn’t Catholic, and I definitely didn’t believe in something as silly as a superstition about locking down a husband at all of 18 years old. Needless to say, I had a hard time making friends my first semester at Notre Dame.

Until I met Christina Bramanti. 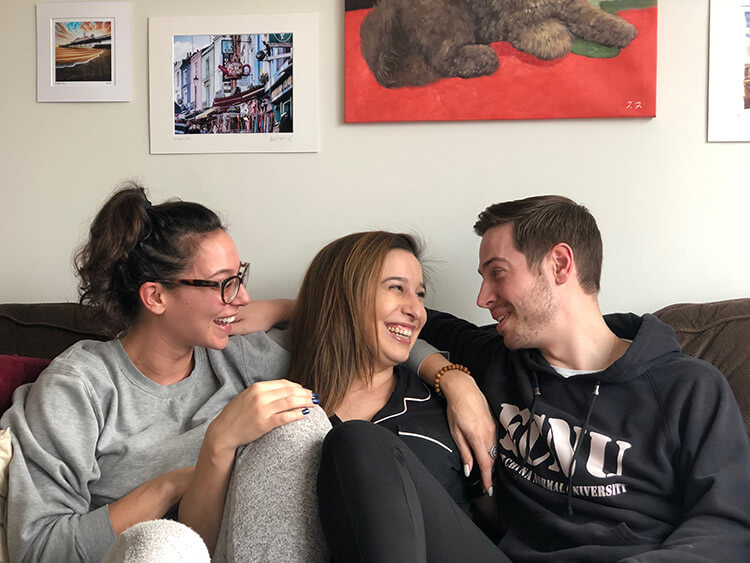 Lying on her New York City couch during the Super Bowl this month, Christina ’14 and I realized that neither of us could remember the exact moment that we met. But in one of my many cigarette breaks under the Lyons Hall arch (my own little arch tradition and a silent retaliation to the “Ring by Spring” phenomenon), the two of us struck up a conversation. She took no issue with my attitude problem, and, in less than 15 minutes, she had cracked my hard little shell and gotten me to open up about my family. My home. My hobbies. The fact that I was already considering transferring. How unhappy and far from everything I felt.

In that one vulnerable moment, my Notre Dame experience changed. Suddenly, I had a friend. Not a roommate, or some forced-to-be-friends situation, but a real friend who I felt like I could be myself around. Someone I could call in the middle of the night. Someone whose door I could show up at unexpectedly. Someone with whom I could eat an entire bag of cookies still go to South Dining Hall afterwards for a full dinner.

Our pairing was not an expected one — our rector laughed in our faces when she heard we’d become friends — but, somehow, it has always worked. Christina is Catholic; I am not. Christina is close to her family; I am not. Christina is an overall positive person; I am not. Christina and I have opposing political beliefs and vastly different stances on issues that would otherwise drive a wedge between people. But for whatever reason — call it the universe, fate, the Holy Spirit — we choose to sit and learn from each other. We listen to one another. We argue, sure, but we respect each other and focus on patience and empathy rather than hatred and ignorance. That’s been the foundation of our friendship for these almost ten years.

Christina began dating Ian Hall ’14 shortly after she and I met. I assumed, since we unfortunately still live in a world where we are told that romantic partners take priority, that this would be the end of our friendship. I braced myself for the inevitable dissolution — the day she would say that Ian thought I was monopolizing her time. The day that she would stop answering my texts or calls. The day that we would run into each other in the bathroom at midnight and gush over how much we miss each other and how we just have to get lunch at Greenfields (RIP) one of these days . . . and then avoid eye contact for the rest of the semester. But those days never came.

Ian was the sweetest, kindest, most gentle-hearted soul I’ve ever met. As it turned out, he and I have the same sense of humor, and we bonded quickly over teasing Christina for her “y’all”-heavy Texas accent. To this day, I don’t know if my paranoia over losing a friend ever registered with them. They stayed together throughout our four years, and as I dated around, it became a running joke that Christina and Ian were the constant in my life and my SOs were simply a rotating cycle of people tagging in for our double dates.

By the time graduation rolled around, I had lost the attitude problem and the cigarettes but kept Christina and Ian. They had found soul mates, and I had found a friendship that I knew would last for the rest of my life. I’m sure I would have met great people if I’d transferred to whatever school I was considering during those smoke breaks under the Lyons arch. But I wouldn’t have met the Halls.

My favorite couple made it official about two years after we graduated, and while grad school precluded me from being at their wedding, I felt an energy in the air that Saturday afternoon — the same kind of energy I still feel when I turn onto Notre Dame Avenue and see the Golden Dome. The newlyweds lived in London for a bit, and by the time I finished grad school and had transitioned to New York, they were making plans to move there as well. I may not be able to wander down the hall in slippers and a robe when I want to see Christina these days, but we live off the same NYTA train line — which might be the next best thing.

Along the way, I had found a fiancé who seemed likely to keep the Halls and I in double dates for years to come. It’s always soothing to find that your friends like your partner and vice versa, and that’s the kind of friendship that he and I had with Christina and Ian.

But about six months ago, we decided to end our engagement. It was for all the right reasons, and as my mother kept reminding me, “Thank God it’s a breakup and not a divorce!,” but still — no matter how rationally you can view a situation like that, your heart isn’t always on board with your brain.

Just as Christina had saved me while I struggled through my first months at Notre Dame, she saved me again as I worked through one of the greatest trials of my post-college life. She and Ian let me stay with them whenever I was having a rough day. They called me daily to see how I was doing. They fed me when I realized I’d gone days without eating. They helped me move — which, in New York, is no small feat.

Heartbreak is a funny thing. You’re missing your person, or the person you thought your person was, and simultaneously you’re missing the person you thought you were. It isn’t just the loss of a partner, but the loss of life as you’ve known it. But the people who come flocking to your side and the outpouring of love they give almost, almost make up for it.

On New Year’s Eve, I was spending the night alone, in an absolutely brutal slump. I hadn’t left my bedroom in 36 hours, and at 11:53 PM, I got a phone call. It was Christina.

“Hey,” I answered. “I thought you were at your party.”

New York City. On New Year’s Eve. When I live deep into Brooklyn and she’s on the Upper East Side. She’d traveled further than just down the hall, and in stilettos instead of slippers, but in the middle of a party, she left to show up on my doorstep.

That’s what true friends do. They show up when it matters, regardless of convenience or timing. I don’t think I’ve ever cried happier tears than when the fireworks starting going off and she was there with me.

I share this story because people sometimes forget that Valentine’s Day isn’t just about romance. In Spanish, we literally call it Día del Amor y la Amistad — the Day of Love and Friendship. Romantically, my love life might be nonexistent right now, but my friendship with Christina and Ian has never been stronger. And how could I ever give up on love when I have those two as a daily example?

In that same Super Bowl Sunday conversation with the Halls, we somehow circled around to the traditions of the Lyons Hall arch. So I asked them: Did you ever hold hands in a figure eight around the lakes and then kiss under the arch?

“No, we never have!” Christina said. “He only finally kissed me under the arch after we had graduated!”

I turned to Ian, and he shrugged.

Natalia Cuevas is an actor and model based out of New York City. She also does some freelance writing from time to time. Her favorite pastime is having a free lunch of food samples at Costco.