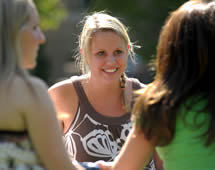 While many Domers can still recall the butterflies fluttering in their stomachs as they tore open the envelope informing them of their fate among the Fighting Irish, few if any have actually relived this moment on the big screen.

Probably no one, that is, except for Megan Krizmanich.

About three years ago, Krizmanich, a junior pre-med major with a minor in business, was one of five teenagers in Warsaw, Indiana, who agreed to have their senior year of high school documented by Academy Award-winning director Nanette Burstein.

Now, two years after the filming ended, the 10 months of footage has been crafted into the movie American Teen.

“It kind of follows five high school seniors through their senior year,” Krizmanich explains of the movie. “My personal story is getting a lot of pressure from my parents and peers to get into Notre Dame.”

Though she may come across as the mean one in the movie, Krizmanich, who’s billed as the film’s “princess,” says that’s because she was too apprehensive about her acceptance into Notre Dame. “I let the pressure take over.”

Obviously, Notre Dame accepted her, but it was a bumpy ride.

In one scene, her father, Dr. Thomas Krizmanich ’71, gives her two fake letters from other schools before giving her the real one.

Krizmanich happened upon her role in the film when she met Burstein and gave her a tour of Warsaw.

“I was student body vice president and very involved in about every activity my high school had to offer, so the administrative staff selected me [to give the tour] because of my involvement in the school,” Krizmanich says.

Krizmanich and Burstein then stayed in touch, and the director personally invited Krizmanich to be involved with the documentary.

Enough time has passed since the cameras and crews have left Warsaw that Krizmanich can say she’s definitely not the same person that she was when she was being filmed.

“I think I’ve matured a lot,” she says. “With that initial jolt [from going away to college] you kind of gain some independence.”

Unsure of what would become of the footage, Krizmanich opted to talk very little of her experience in front of the camera. “We hadn’t heard anything for a year and a half about the film,” she says.

When Krizmanich received a phone call last November, informing her that the movie was accepted by the Sundance Film Festival, the news was as much of a surprise to her as it was for those around her. “It definitely caught us off guard,” Krizmanich explained by phone from Los Angeles during a summer tour for the film. “We had no idea. If they had told us that we would be here we probably would have laughed.”

Along with the L.A. visit, Krizmanich and her co-stars attended screenings in Chicago, New York and Toronto. Even though people are gradually starting to recognize her and her co-stars, Krizmanich says she’s the same Notre Dame student that she has been for the past two years—hanging out with friends, attending football games, participating in RecSports activities and spending lots of time in the library.

“I am just an ordinary college student,” she says. “We don’t feel like celebrities. It’s just really surreal. . . . People recognize us, and people are in love with the film.”

Although the movie captures one of the most important moments in Krizmanich’s life to date—being accepted into Notre Dame—she says she’s had her fill when it comes to participating in any more documentaries.

The director “would call us every week and ask if we had anything major going on,” Krizmanich recalls of her 10 months in front of the camera. “A lot of times it was [us] sitting around doing nothing.”

Throughout the film, Krizmanich’s expectations of Notre Dame are evident as she anticipates her acceptance. An animation sequence in the documentary depicts Krizmanich imagining Notre Dame’s campus as what she describes as a “paradise land with everyone getting along and holding hands.” While this image may be slightly embellished, Krizmanich’s actual dream of Notre Dame has become reality.

“Notre Dame has lived up to what I hoped it would be,” she says. But “the schoolwork,” she adds, “is a little more than I hoped for.”

Yonika Willis is a freelance writer and former reporter for the South Bend Tribune who will complete her master’s degree in English studies and communication at Valparaiso University this year.