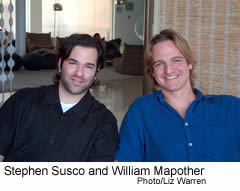 When an up-and-coming screenwriter and a popular actor meet on a film location in Japan, their rapport quickly leads to friendship. Amazement ensues when the two discover they have more in common than a mutual fondness for film trivia and an appreciation for the well-turned phrase.

Stephen Susco ‘95. Energetic young screenwriter with his first major motion picture, The Grudge, scheduled for release in October 2004. His wavy black hair is unruly enough to look cool when he absent-mindedly runs a hand through it. With 26 screenplays under his 31-year-old belt, Susco embodies the creative intensity one imagines necessary to advance in today’s idea-driven film culture.

William Mapother ‘87. His list of credits includes work on more than a half-dozen films with cousin Tom Cruise (nee Mapother). Breakout roles in 2001’s In The Bedroom and Swordfish earn him critical acclaim. He’s sporting a chemically lightened shag haircut, remnant of a recent role as a surfer dude. Tomorrow, on his agent’s orders, he’ll get a military-style buzz.

At a coffee shop on Sunset in Los Angeles, screenwriter Susco shares a little-known fact about his craft: One can make a successful living writing screenplays without ever having one of them immortalized on celluloid. Early in his career, Susco recounts, he was invited to a reception at the lavish home of a screenwriter who was obviously quite successful. Strangely, Susco had never seen a picture written by the gentleman, who’d been in business for some 20 years. When he inquired, he learned that the man had sold many screenplays, but not one of them had been made into a film.

“One of the interesting paradoxes of writing for hire,” Susco says, “is knowing that once you’ve sold a screenplay, you don’t own it.”

Susco also finds the domino-like effect of success interesting. “The business can be very frustrating, but once you’ve got something in production, people take notice. Right now, I’ve got three or four other projects close to getting made.”

Actor and fellow ND grad Mapother chimes in. “There are only two basic rules for writers: 1. Screenplays are structure, and 2. Nobody knows anything.”

Mapother explains the rationale, “Hollywood, as the saying goes, is high school with money. It operates with a kind of herd mentality. Nobody knows how a film will perform, so everyone remains noncommittal. If a film isn’t successful, an actor still remains a talented actor. A writer can write another script. The producer is in the most precarious position. There are lots of self-esteem issues and anyone who can be held liable usually is. That’s why people avoid taking positions and say things like ‘We should think about it.’”

Susco and Mapother are in Tokyo during the filming of The Grudge, a horror film based on the Japanese thriller Ju-On. The two, who quickly became friends, are watching a satellite telecast of the Academy Awards. During the program, Mapother is commiserating online with his younger sister, Amy ‘96, an actress in New York. When Susco’s name comes up, Amy asks if this is the same Stephen Susco who graduated from Notre Dame. Mapother determines that it is, and all three share a laugh. “I mean, what are the odds?” Mapother asks.

When the two learned of their common bond, the mutual respect continued to grow. “This is a very collaborative medium,” Susco says. “When I met William, he really wanted to talk about the character. I can write stuff, but the actor is the one who brings it to the next level. The best movies come from people who are working in harmony.” Mapother concurs, “People I connect with really love their craft. . . . Stephen’s sincerity is manifested in his wanting to make the work the best it could be.”

Although the two weren’t on campus at the same time, both acknowledge that their shared Notre Dame experience inspires kinship. “You don’t often meet people with whom you really connect,” Mapother says. “Stephen and I immediately struck a creative chord.” And more than that: When Susco became engaged to be married, Mapother was one of the first people he told. Mapother, a second-generation Domer, was doing stage acting in New York when he realized the acting bug had really hit, and he moved to Los Angeles. In L.A., he taught high school English for three years while building his acting resume. Smaller film roles led to larger ones and to television guest spots on such dramas as Law and Order, CSI: Miami and Touched by an Angel. Crew assignments and parts in a number of films with his famous cousin added to his repertoire.

Susco acted in some 25 student theatrical productions at ND and directed two. His 16mm short film won a Student Academy Award in the 1993 College Film and Television Awards. After graduation, Susco decided on film school over law school. He then confronted perhaps the most daunting task of his academic career: spending football season on the USC campus.

At one point, Susco says, “I walked into French class and the teacher was wearing a shirt that said ‘ND Sucks. Go USC.’” The gauntlet having been thrown, Susco draped himself in Fighting Irish regalia. Susco says he began to rethink the wisdom of his decision when ND soundly trounced USC that year and he had to walk past the USC football team afterward to get home. He graduated from USC with an MFA in 1998.

Commenting on the current rash of thinly plotted, technology-driven films and reality TV shows that rely on shocking the viewer’s sensibilities for their impact, Susco shrugs. “When a studio makes money on a very large bad movie, it gives them more money to make more good films.”

Mapother interjects: “It’s important to recognize that reality shows are not necessarily a leap in development. Shows like Cops and Jerry Springer started the TV trend. But the concept is not new. Think about carnivals: People would pay to see the bizarre, the different. There has to be something outlandish.”

Susco takes a measured approach: “Being a smart screenwriter means you know what you’re doing. You can be astute, know what studios are looking for. For me, that means always working on two projects at once: one that is my passion, and one that will sell.”

So what’s next? “I’m building toward directing,” Susco says. Mapother would like to be involved in more character-driven films. “I’d much rather perform opposite a human being than a gun or a time bomb. You have more to work with.” Mapother is at work on a screenplay of his own and has run the idea by Susco, who thinks it has potential.

For now, the two are making plans for the premier of The Grudge. Susco’s family is coming out for the October 22 event. “I’m really looking forward to seeing how the audience reacts,” he says. “Hey,” Susco says to Mapother, “we’re having a party at my house, and you’re invited.”