The winter wind on Achill Island began to carry a soft Irish rain, so we ducked inside the nearest church.

The weathered stone building was cool, but dry, and had that special kind of quiet I’ve only ever found in empty churches. The tall arched windows let in a gentle gray light, and we spoke in hushed voices even though we were the only ones there. 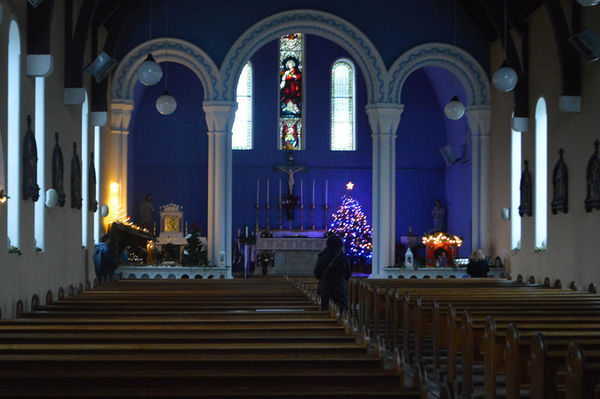 “Wow,” my mom said quietly, almost to herself, as she wandered up and down the aisles. “Just think, Great-Grandma could have gone to Mass here.”

She probably didn’t. But she could have, and that’s what mattered.

My mom had a lot of those moments on our family trip to Ireland. She, along with my two brothers and my girlfriend, Caroline, had come to visit me just after Christmas 2016. We rented a car in Dublin and drove out to County Mayo on the west coast, the ancestral home for my mom’s side of the family. Her grandmother, Margaret Clarke, grew up on Achill Island in the late 19th and early 20th centuries, before immigrating to the United States in 1909.

As often happens on the west coast of Ireland, the rain passed after a few minutes, and we strolled back outside and across the street, to the shore of a small inlet that separates Achill from the mainland. Aside from a few road signs — and the paved road itself — the moment felt pleasantly untouched by time, the same way a lot of Ireland still feels. A few cottages dotted the grassy horizon and a lone hill stretched into the low-hanging clouds, but nothing looked like it couldn’t have been there a hundred years ago.

Against this idyllic backdrop, surrounded by the people I love most, a thought similar to my mom’s struck me. Perhaps Great-Grandma Clarke didn’t go to that exact church we used as refuge from the rain, but she passed by it. She knew where it was, and she was used to a view just like this one. At some point, she walked the same ground we were walking. And maybe, just maybe, when she left Ireland for the United States more than 100 years ago, she thought her descendants would be able to return someday, something she never got to do.

I spent a whole year having moments like that.

After graduation, I moved to Ireland to work for Notre Dame’s study abroad programs in Ireland. As part of the team at the Dublin Global Gateway and Kylemore Abbey Global Center, I ran the campus ministry program for study abroad students and served as one of their principal points of contact and support during their time in Ireland. I saw the yearlong job as a way to give back to the same study abroad program I had gone through as a junior at Notre Dame (where Caroline and I first met, too). More importantly, to me, a whole year in Ireland would allow me to deepen my ties to the island, and forge a more genuine Irish identity.

I grew up on the South Side of Chicago, in a neighborhood that takes deep pride in its Irish roots. As far as both sides of my family are able to trace back, we are 100 percent Irish. So, I have always claimed some sort of Irish-American identity, even though my last direct relative left the island some 100 years ago.

Studying abroad in Dublin helped me bolster that identity. I lived on campus at University College Dublin, took courses in Irish history and politics, and became friendly with real Irish people. Still, a semester abroad left my Irish identity at little more than superficial.

Sure, I was the proud owner of an Aran-knit sweater and a real Irish flat cap. I enjoyed a well-poured pint of Guinness and a smooth glass of Jameson. I even enjoyed tapping my foot along to the tunes of groups like The Dubliners, The Chieftains and The Clancy Brothers. Ultimately, though, I had only spent four months in the Irish capital, with frequent weekend trips to other European countries and a few excursions to other parts of the island. I still yearned for a deeper, more authentic connection to my ancestral home.

As soon as I returned from my semester in Dublin, I vowed to find a way to get back to Ireland as soon as I could. As luck would have it, a way back found me instead. In late February of my senior year, I got an email from the director of the Dublin Global Gateway, Kevin Whelan, asking if I might be interested in coming back to join the team as campus minister. I accepted before St. Patrick’s Day.

I moved to Ireland in late August, and spent my first few days taking care of mundane but necessary tasks: opening a bank account, setting up a cell phone plan, stocking up on groceries, unpacking my belongings. Pretty much anywhere else in the world, I would have found these tasks dreadfully tedious. In Ireland, they weren’t. I was walking the streets of Dublin with confidence, completing everyday tasks, just like the million or so people around me. I felt instantly ingrained in this place and culture that were relatively new to me, but came so naturally and comfortably. 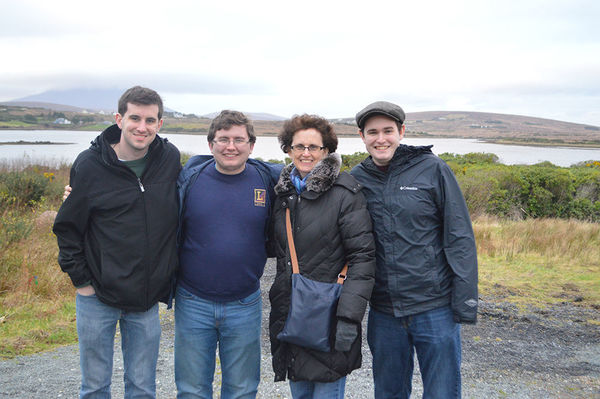 The Rooney family in County Mayo

That feeling never really wore off. Even as I settled into a routine, I never lost the awe that came in even the most ordinary moments. I clung to this idea that my ancestors were deeply proud of the life, even if temporary, I was making for myself in Ireland. I imagined that they hoped their descendants would appreciate and love their Irish heritage, perhaps enough to compel us to go back someday. I couldn’t help but feel I was living my great-grandparents’ dream.

This feeling would wash over me in commonplace moments — in line at the store, ordering a drink at the pub, going to Mass. My ancestors would have done all of these things here, in this place. Over the course of my year in Ireland, this feeling kept growing, and I gradually began to shape a more genuine sense of Irishness. I read the Irish newspapers, yelled at the TV when the Irish rugby team played poorly, and could even give wayward tourists directions around Dublin. I’m not saying these activities make me, or anyone else, Irish. Identity is not merely a collection of attributes and interests.

Instead, I found my Irish identity in my everyday life, and the rhythm I developed. I easily slipped into the relaxed pace of Irish life. I savored conversations and cups of tea with new friends, and rarely felt rushed or worried about much of anything. Ireland, and Dublin especially, began to feel like a real home.

That’s what made it so hard to say goodbye. When I moved back home to Chicago last August, I bid farewell not only to dear friends and colleagues, but also to a life and a routine I had created for myself. And I left behind the dream I had convinced myself my ancestors had for me.

But I left one of their dreams to return to another. As deep a connection as I feel to my Irish heritage and now to Ireland itself, I also know my great-grandparents and great-great-grandparents left the island, like millions of others of their generations, in search of something Ireland couldn’t provide for them. They came to the U.S. for work, financial security and the promise of a brighter future for their children and grandchildren and great-grandchildren.

Growing up, whenever my brothers and I tried to claim we were Irish, my dad was always quick to correct us. “We are Americans,” he would tell us, “of Irish descent.” He was right. Our ancestors gave up their entire lives in Ireland so that they and, more importantly, their descendants, could be American.

A century later, I hope they can all rest contentedly in the knowledge that their offspring have met pretty much every conventional definition of success in America. More than that, I hope they’re proud that we, or at least I, have tried to maintain a real and deep connection to Ireland, even enough to go back and live there for a little while, just to check in on it for them.

Jack Rooney is a freelance journalist currently based in his native Chicago.