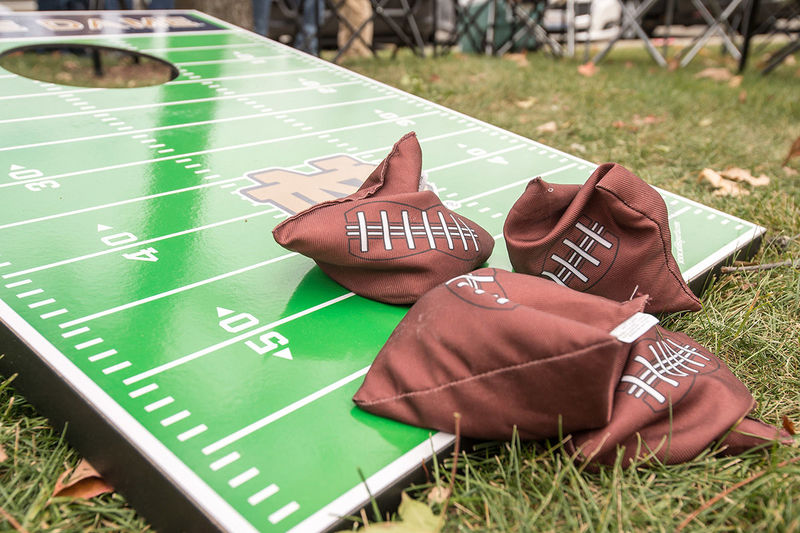 Every two years, my mother’s father’s side of the family gets together for a reunion. Half the crowd lives in Ohio, the other half — my half — in Maryland or Virginia. No one lives in West Virginia, but that’s where we go to see each other, and so, in our boundless creativity, we call it the “West Virginia Reunion.”

I have insanely fun memories of this reunion from childhood, when I divided my time at the state park lodge between the mini-golf course and hide-and-go-seek. I loved reconvening with second cousins, whom I thought were exotic and foreign. What’s “Ohio” like?

I loved that these strangers were bound to me by an unseen “blood relationship,” which meant that, even though we saw each other but once every two years, they were required to be friends with me. Having a family reunion, I thought, was like being part of a secret society.

One thing I could not stand about the West Virginia reunion was the cornhole tournament. To this day, it is serious business. Everyone is required to participate.

I hated cornhole for the reason I hated all sports — I was not very good at it, and I didn’t relish the idea of failing repeatedly and publicly. Plus, I reasoned, it was stupid. Chucking beanbags at a hole carved into a wooden incline? Who comes up with this stuff? Probably someone from Ohio.

Even as a kid I knew it was utter futility to face off against my Midwestern relatives — defeat was guaranteed. From what I understood, the Ohioans spent all their free time practicing cornhole just for this one afternoon in June.

So I would try to hide from the cornhole tournament or lose in the first match. Better to throw in the towel when only a few people are watching than to fall on your metaphorical face in the finals.

I much preferred talking to one of my great-aunts on the sidelines. They were always pleasantly interested in my hobbies, my favorite school subjects and the rest. They made me feel famous; cornhole made me feel like a flapping seal trying to throw a beanbag.

I attended the most recent reunion, and nothing has changed. The old lodge still sits in the same spot at the highest point in the park. There’s still no one from West Virginia. And the great cornhole tournament still holds its place as the central event.

But this time, an odd thing happened.

I had just graduated from college a few weeks before, and I knew I would be positively attacked for information: How was college? What are you doing with your life now, and where, and why and with whom? How are you doing — emotionally?

Those old friends, my exotic cousins and curious aunts, became enemies to be avoided at all costs. Not that I had any personal problems with them; I was looking forward to visiting. It was just that I had nothing jaw-dropping to relate, which made me feel just as much like a failure as any sport had. And I didn’t relish the idea of failing repeatedly and publicly.

When the reunion began, I tried my best to be friendly. The awkward interrogations came as expected, and I answered to the best of my ability. My tactic was to try to overpower my inquisitor with my own batch of questions. I am told that people love talking about themselves; I hoped that truism would hold, even as it might discount me as a person.

Midway through the morning, I was sitting on an old fiddleback chair in the lobby of the lodge, doing battle with two aunts. One was asking about my occupational plans, to which I tried to reply as vaguely as possible, and the other was trying to be helpful by jogging my memory with random tidbits she had gleaned from family gossip. Didn’t your mom say that you were interested in a Ph.D. . . ?

As combat was about to shift to the topic of my romantic life, a voice, as if from heaven, was heard throughout the lobby: “CornHOLE!”

This was (possibly?) my mother’s second cousin once removed, the unofficial but passionate self-appointed organizer, governing board and referee of the tournament. He’s the kind who somehow tosses beanbags with a beer can in one hand and a cigar in the other, and he wins every time.

“CornHOLE!” he bellowed again, like he was hawking popcorn in the bleachers. And for the first time in my life, I thought, “Cornhole! Thank God!”

I excused myself from my assailants and joined the mob congregating around the sign-up table.

I was paired with a first cousin, and we began practicing on one of the many sets of boards erected outside the lodge. Folding canopies were placed off to one side to shelter the onlookers. Promptly at 3 p.m., the bags began flying for real. I felt myself mercifully drawn into a world where life plans and career paths no longer mattered. All that counted was getting that beanbag into the hole or knocking off your opponents’ dangling one-pointers.

The games raged on through the afternoon as aunts, uncles and cousins, their faces screwed up in concentration, aimed to eliminate each other. (From the bracket, that is.) As I watched all the contrived rivalry, my heart softened towards those aunts with whom I had been locked in information-war. The whole ritual of pressing each other for more news than either of us was willing to give suddenly seemed, like a cornhole tournament, simply a ritual.

My cousin and I were defeated in the second round. What could we do against two Ohioans? I took a seat among the spectators, relieved that they were chiding me for missing the hole rather than for my lack of career path.

In the end, that team of Ohioans fell to the uncle who organized the tournament and his partner — my sister. It was the greatest pleasure I’ve ever taken at a sporting event, and, in a way, I believe it vindicated my loss by some kind of sibling proxy.

The moment was a revelation: like vegetable trays, showers and going to bed, cornhole is one of those things that, as an adult, I’ve not only warmed up to but have come to love.

Thank God for simple, nonsensical traditions, the ones that make you forget the serious stuff. Every family, I think, needs such a tradition. They remind us that family is not something you can win or lose — it’s something to which you just keep returning.

Simon Brake is a graduate student in theology at Boston College.