At the end of what had been a very good weekend, I was eating dinner while I listened to an acquaintance talk about his mother and his girlfriend.

“They butt heads,” he said. “Because they really are the same person.” 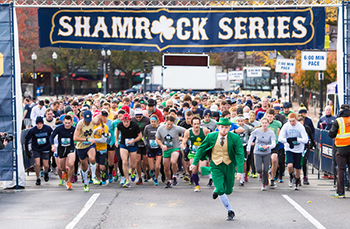 I had just spent four days in the midst of the Shamrock Series festivities in Boston. I grew up in a home where I learned the words to the Victory March before I knew my multiplication tables, and, in 2013, I smacked a “Graduate Like A Champion Today” sign in the tunnel on my way out of Notre Dame Stadium. Now I live and work in New Hampshire, and for the first time in my life, I can’t throw a stone (or a marshmallow) and hit the next Irish fan in the head. In a state where Tom Brady drowns out any college football chatter, I could not wait to welcome friends, family and fans from South Bend.

Boston, however, wasn’t so sure.

The city was a gracious host and a beautiful backdrop for the Notre Dame weekend — but not without an edge.

When I walked into Symphony Hall for an Irish concert with the Boston Pops, the doorman was both smiling and shaking his head. A Red Sox fan, he had agreed to let us borrow his ballpark — but just for one weekend, he (mostly) joked.

“This year, that means students, faculty, a pregame Catholic Mass, and a satellite university bookstore are all headed to the Hub — bringing loyalists who have found themselves on more than a couple of the most-insufferable-sports-fans lists,” he wrote.

Jack Stedman, an associate sports editor for the Boston College student newspaper The Heights, pointed out the sting felt by some Eagles fans — the away team less than five miles from its home turf.

“Fenway Park is already plastered in green and gold, and the stands will only have a small section of BC fans,” Stedman wrote in his column. “Brian Kelly is the big bully, coming into [head coach Steve] Addazio’s own backyard and triumphantly sticking his flag into the ground. The whole thing adds a little insult to injury for Eagles fans, who have suffered through enough this year and now don’t even get to call this game their own.”

On our way into the game, while Irish fans streamed down Yawkey Way, we bought pre-game sausage and peppers from a vendor outside the stadium. The man behind the cart had some choice words for Notre Dame’s takeover of the ballpark, but I can’t print them here.

Even my boyfriend, born in the North Shore and raised on the Red Sox, cringed a little at the Notre Dame banners draped on Fenway. He did wear an Irish-emblazoned pullover to the game, but in no small part because it was a gift from my mom — the fiercest football fan I’ve ever known, a 1985 Saint Mary’s graduate with four Fighting Irish daughters.

So, was Notre Dame the real Green Monster in Boston?

Consider all we have in common. In 1919, Irish freedom fighter and future president of Ireland Eamon de Valera was welcomed at Fenway Park — where a rally for his cause reportedly still holds the attendance record at more than 60,000 people — and, later that year, at Notre Dame. Both Notre Dame and Boston are home to a scrappy Irish heritage, one of which both university and city are proud.

As much as we might both hate to admit it, Red Sox fans and Notre Dame fans have shared the same mantra. “This year,” we say. “This year.”

At halftime during the game, the Boston College and Notre Dame marching bands teamed up for a rendition of “Sweet Caroline.”

On Sunday morning, many Notre Dame fans knelt during Mass in the 19th century Cathedral of the Holy Cross in Boston.

I was a senior in college when the Boston Marathon bombings ripped through the city’s heart. I remember it was raining in South Bend that day, but I went for a run around the lakes anyway. I was not the only one on the trail.

We — university and city — are proud, faithful, stubborn, strong. We are unapologetically ourselves. We defend our traditions and our name.

So I think back to those two women who butt heads but, in the end, are more alike than they realize. And to you, Notre Dame and Boston, I raise a glass.

A pint of Guinness, of course.

South Bend native Megan Doyle is a reporter for the Concord Monitor.