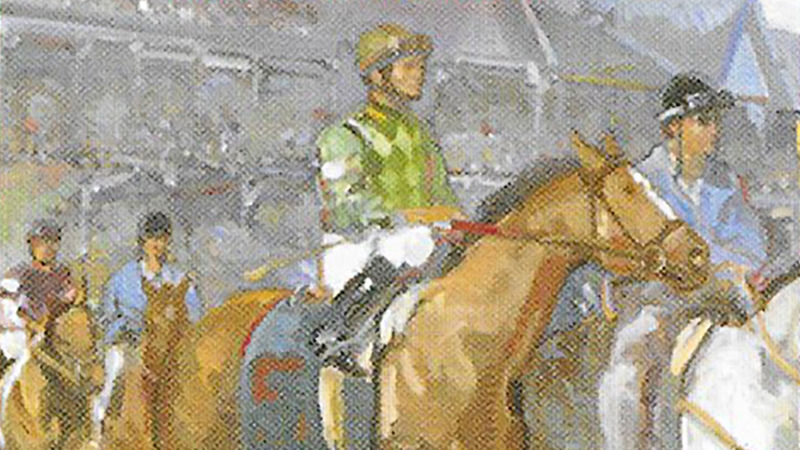 Family and friends, you have 51 acceptable weekends for your wedding. If you pick the first one in May, I will raise a mint julep in your honor . . . at Churchill Downs — home of The Greatest Two Minutes in Sports.

My Kentucky Derby devotion began in April 2004 in the typical fashion: at a bachelor party in Cabo San Lucas. Boyd, the best man whom I’d never met before, could not contain his excitement for the upcoming Run for The Roses. “Reidy,” the lifelong Louisville resident said, only it sounded like Rady, “You’re coming to Derby!”

Back in Los Angeles, a Southern redhead I’d been wooing insisted I wear a seersucker suit to the races. When I balked at buying a suit I’d don only once, she requested a private fashion show. Online, I selected white seersucker with light blue stripes. I drew the line, however, at buying white bucks.

Upon my arrival in Loo-uh-vul, Boyd informed me that we did not have tickets to the Derby on Saturday; instead, we were going to the Kentucky Oaks, a day of races on Friday. I couldn’t hide my disappointment. He explained that Oaks was actually more fun because it attracted more locals, whereas Derby drew “amateurs.” Shee-it. I would’ve gotten an Affirmed tattoo if Boyd had told me all the cool kids were doing it.

Dressing on Kentucky Oaks morning, I immediately regretted my seersucker decision. After nine years in dark suits as a pharma salesman, the fashion contrast unsettled me. My doubts doubled when I saw Boyd wearing a gray suit. But after his delightful wife, Heather, let out a wolfish whistle, I sensed everything was going to be all right. 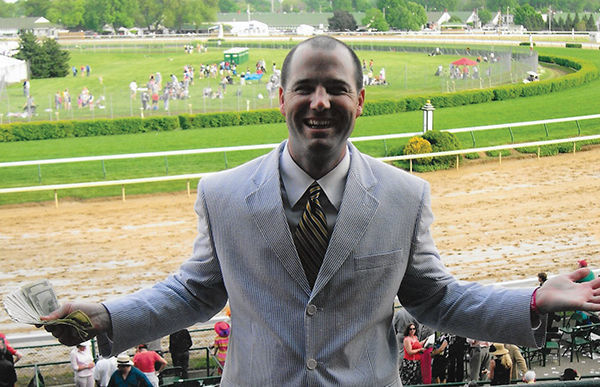 That feeling grew as we neared the racetrack. Women pointed at me. Smiled. Flirted. And these were just the halter-topped ladies on whose front lawn we parked for $15. During the 20-minute walk to our seats, numerous ladies invaded my personal space. Charges have been filed for less grievous actions. Southern women instinctively reach for seersucker the way Italians reach for bread — like it’s encoded in their DNA. Seemingly no belle can resist caressing the crinkled cloth, even if it’s draped on a stranger and her boyfriend is seething nearby. And I was okay with that.

The Kentucky Oaks race features only 3-year-old fillies. The event’s decorations and fashion appear to have been chosen by 3-year-old girls. Pink rules the day; the track is decorated with pink bunting, and the more than 100,000 guests are asked to prominently incorporate pink into their attire in an effort to raise funds and attract national attention to the fight against breast and ovarian cancer. Boyd and I did not get the memo.

It was a shame that a portion of losing bets did not go to the aforementioned charities, as our picks routinely failed to finish in the money. But losses did nothing to darken our spirits on a glorious day. My hosts and I sat in a third floor clubhouse box a few lengths before the finish line, an optimal location to watch the races and people. Before the seventh race, “Melissa,” a neighbor, nodded to me and smiled, “Nice suit.” So I’ve heard.

An hour later, Melissa received a call on her cell phone. She hung up after mere seconds, turned to her friend and nodded. I felt like I’d just witnessed confirmation of a Mafia hit. Melissa told me her father had called from “the fifth floor.” I also simply nodded, clueless, until Boyd elbowed me: “The fifth floor is where the owners sit.” One of the unique attributes of horse racing that turns Pete Rose green with envy is the fact that all the participants (owners, trainers and jockeys) can — and do — bet on the races. Consequently, people who know people get tips. Apparently, Melissa’s daddy, a real estate developer, had given her one for the big race.

She asked if I wanted to walk with her to place a bet on the Kentucky Oaks feature race. A sillier question has rarely been asked of me. Melissa instructed me to place a “trifecta box” bet on the #1, #3 and #6 horses. My blank but hopeful stare prompted her to explain that if those three horses won, placed or showed — regardless of their order — I would collect winnings. My masculinity melted in the face of this gambling guru of a gal. I handed the teller my cash as skillfully as Woody Allen snorted cocaine in Annie Hall.

Note: When a woman wins you $2,500, it really gets a friendship off to a flying start.

Saturday morning Boyd and Heather and I sprawled on their sofas, victims of dehydration. We agreed that we were psyched we didn’t have tickets to the Derby, as it’d be such a hassle to get all dressed up again, battle traffic, find parking, probably get rained on, etc. Thankfully, we’d endure no such hardships going to their friends’ annual party with a TV in every room. Then my cell phone rang. As I answered, I could hear sirens in the background.

Melissa was calling from the police-escorted bus her father rented to chauffer friends and clients to the Derby every year. Daddy had four extra box seats. Gratis. Could we use them? Not wanting to impose my will on my hospitable hosts, I turned to Boyd and Heather for a decision.

One hour later as we walked toward Churchill Downs, I was struck by the change in atmosphere from the previous day. A palpable energy hummed in the throngs. Thirty thousand more people attend Derby than the Oaks, but population didn’t account for the difference; passion did. I’ve been to major sporting events before: College Football National Championship, World Series, Super Bowl. Those games generate tremendous excitement, obviously, but they also produce anxiety, the fear of defeat. Derby engenders no such negative feelings beforehand. It’s 100 percent unbridled joy at what is about to transpire. Only a few times before had I experienced that sense of universal commitment to having the best freaking time ever: on flights to Las Vegas. Oaks is like a really good opening band, but nobody came to see The Killers; everybody is just waiting for U2.

While Oaks was pink, Derby was an explosion at the Technicolor factory. While 99.9 percent of people cannot attend the Oscars, anybody can buy a good ticket for the Derby. Accordingly, ticketholders in the Grandstand and Clubhouse put fashion in pole position. 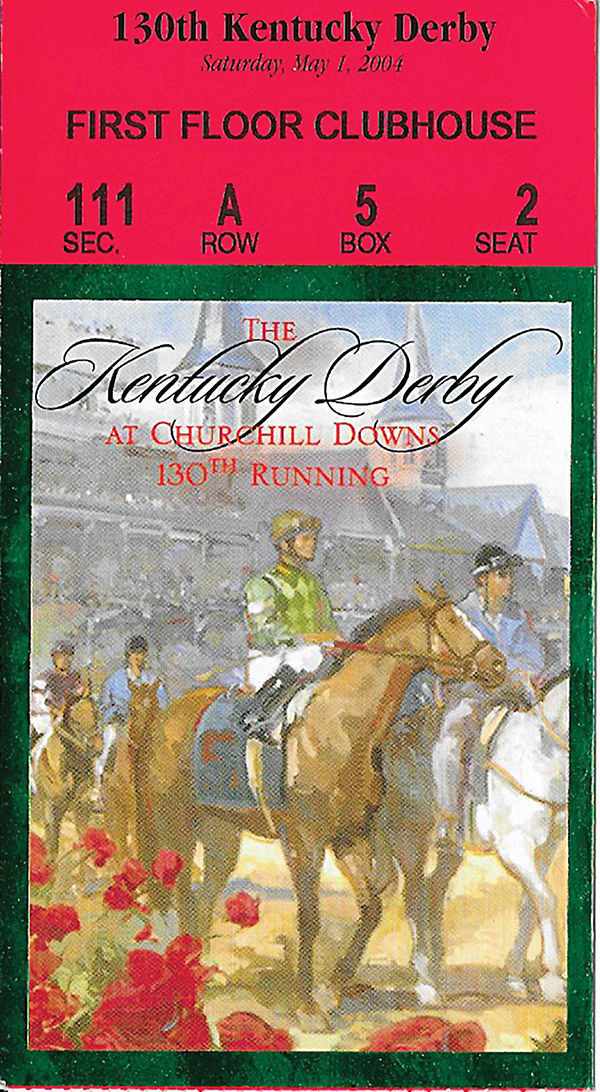 Holy. Headgear. On the flight into Louisville, it was easy to tell which female passengers on the flight were Derby-bound: the ones with hat boxes in the overhead bins. I’m not talking bitty bonnets here. At the Derby, size matters. It is great fun to watch two women in chic sombreros try to elegantly pass one another without knocking brims — like two tanker ships trying to fit through the Panama Canal simultaneously.

Walking among the shaded box seats is like stepping back in time to an era of Dixie aristocracy and elegance, chivalry and courtesy, grandeur and tradition — plus Tom Brady and Gisele, Lennox Lewis and many other celebrities. The humid air teases the nostrils with a mixture of hope, perfume and mint — 120,000 mint juleps are sold over Derby weekend, requiring half a ton of mint.

Our free tickets placed us right on the rail just past the first turn. Box seats on the rail are great . . . until lightning flashes. Boyd, Heather and I got soaked beyond salvage as we splashed through puddles to an indoor bar. I worried Heather might have a breakdown, but she quickly alleviated my chauvinistic fears. “So we’re wet. We’re still at the Derby. For free. And drinking.” Boyd took his better half’s enthusiasm to another level. “Trust me, Reidy. The sun will come out for Derby.” I asked the bartender for one of whatever Boyd was having.

Two hours later, the rain ceased. Shortly thereafter, the clouds parted just enough for the sun to make an appearance. I was yapping away about something when Boyd punched my arm to shut up. Horns blared and more than 140,000 people grew solemn. “My Old Kentucky Home,” Boyd explained. I nodded, despite having no idea what that meant.

“My Old Kentucky Home” is the Kentucky state song. Plaintive, yet sweet, the singer’s wistful tone reminds me of “I’ll Be Home for Christmas.” The only people who did not get misty during this song were those on their first or second trips to the Derby. The toughest men in Churchill Downs cried, and Boyd did, too. I wished that someday I would join them. At the tune’s conclusion, the crowd roared in approval and anticipation. Three minutes later, Smarty Jones had won the Kentucky Derby, and I’d won $200.

I’ve only missed two Kentucky Derbies since then. Those couples better stay married.

Jamie Reidy is a writer who lives in Hermosa Beach, California.