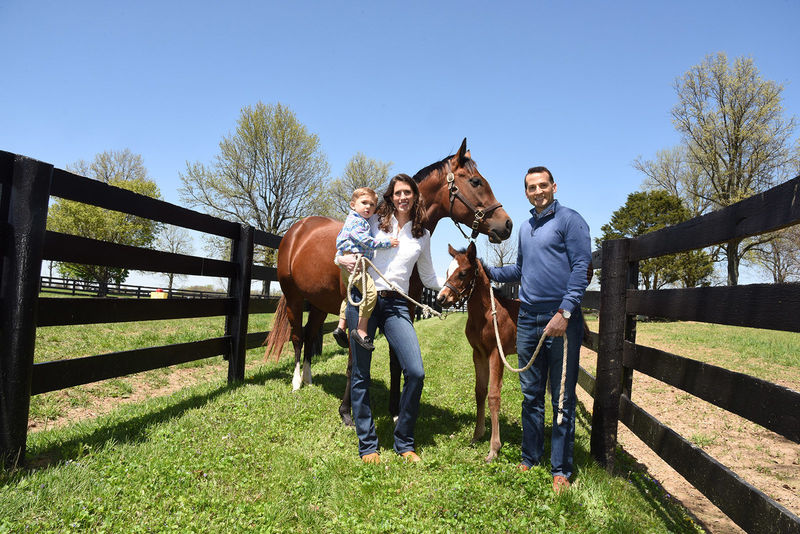 She grew up on a horse farm, worked for famed horse trainer Todd Pletcher, and currently works at Fasig-Tipton, a thoroughbred horse auction house. She also runs an ownership syndicate called It’s All About the Girls, which enables groups of women to combine forces and funds to buy a racehorse. It may not come as a surprise, then, that the Kentucky Oaks, the race for female horses the day before the Kentucky Derby, is Ciannello's favorite race. You'll find more on her life and career in the Summer issue of Notre Dame Magazine.

In the meantime, the Triple Crown races are set to begin and with an expert alum at hand, the magazine turned to Ciannello for her picks ahead of Saturday’s 144th running of the Kentucky Derby.

The Derby is perhaps the most recognizable horse race in the world, but it is unusual. Most races have up to 10 horses in the field, while 20 run in the Derby. Plus, a horse can only race in the Derby once — there’s no chance to get acclimated and come back next year, older and wiser. The one-and-a-quarter-mile race is only for 3-year-old horses.

“You really have to have good luck to run well at the Kentucky Derby. There are a lot of factors that aren’t part of a normal race day,” Ciannello says. “You walk the horse over from the barn in front of the largest crowd they are ever going to see, and the crowd is loud, they go crazy when the gates open. People forget that these horses have never experienced this before, and there are a lot of obstacles for a young horse to overcome. That’s why it’s so difficult to win the Derby.”

It’s difficult to predict who will win, too. But Ciannello and her husband, Evan — who works with her on It’s All About the Girls — were game to share their advice.

WIN (First Place)
Justify: “The likely favorite as he comes into this race undefeated off of three increasingly fast races. This imposing, muscular colt has a very high cruising speed and his big stride is effortless. He’s won three times in three starts.”

Bolt d’Oro: “Considered by many to be the best two-year-old of 2017, Bolt d’Oro has not won a race since September. But with four wins, one second, and one third in his racing career, he has the foundation you like to see coming into this race. Victor Espinoza, a three-time Kentucky Derby-winning jockey, will be riding on Bolt d’Oro on Saturday.”

Good Magic: “The fact that this champion two-year-old, who just won a top Kentucky Derby prep race at Keeneland in Lexington, is under the radar going into this race speaks volumes about just how loaded this field is. Reportedly training very well, Good Magic will try to one-up his sire, who ran third in the 2007 Kentucky Derby.”

Magnum Moon: “The sire of 2013 Kentucky Derby winner Orb, Magnum Moon is an athletic colt that has enough tactical speed to put himself in a good position early.”

Mendelssohn: “Mendelssohn is the x-factor of the field and hard to dismiss coming off of his 18-length romp at a recent race in Dubai.”

Audible: “Audible won the Florida Derby in very impressive fashion and is coming into this race riding a four-race winning streak.”

Maura Sullivan Hill '11 is a writer and editor living in Chicago. She was an intern at Notre Dame Magazine in the fall of 2010 and has also written for Loyola Magazine, Holy Cross Magazine, The Scranton Journal and Cosmopolitan.