Imagine you’re a historian defending your doctoral dissertation on Thomas Jefferson in the dome room of Monticello. Or a young botanist presenting your research on plant evolution in the gardens of Charles Darwin’s home in Kent.

Give the moment a chance to sink in and you might experience a touch of the rare tingling elation that composer and pianist J.J. Wright ’14MSM, ’17DMA felt this spring when his Easter Vigil-themed sequence of five jazz oratorios, Drama and Devotion, premiered inside a landmark 16th century church in Rome. 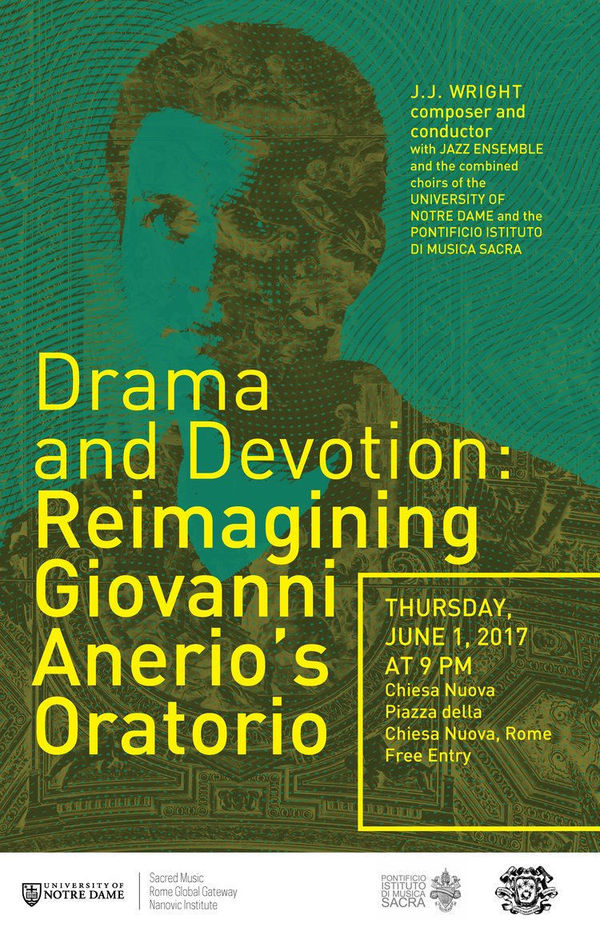 The parish church of Santa Maria in Vallicella, best known since its reconstruction in 1575 as Chiesa Nuova, or “new church,” was the spiritual home of St. Philip Neri and his Oratorians, a community of priests who, filled with the evangelical fervor of the Counter-Reformation, hosted evenings of prayer, preaching, conversation and dramatic musical reflections on the scripture reading of the day — a kind of pious precursor to the Parisian salon.

By the early decades of the 17th century, these vespertino services had become the most popular musical events in Rome. The house composer, Giovanni Francesco Anerio, was fast perfecting the oratorio, a concert piece in which multiple voices create dramatic tension through their layered meditations on a story from scripture.

If that description evokes Händel’s Messiah for you, you’ve put your finger on the musical form’s best-known example. No one, Wright says, did more to establish its power or popularity than Anerio, a Jesuit and musical innovator who blended sacred themes and traditions he’d learned under Palestrina in the Sistine Chapel choir with the lyrical and dynamic — but decidedly secular — madrigals of his day.

Anerio delighted his audiences, Wright says. He also had his critics, who fretted over the conflict they saw between the secular and sacred. As a pianist who nearly foreswore the jazz music of his youth and early professional work to pursue a career as a church musician, Wright can relate, but he says he and the Italian priest-musician have come to agree across the centuries: Sacred music can be both performance-focused and prayerful.

Recently hired as the director of the Notre Dame Folk Choir, Wright also sees a similarity between the post-Council of Trent (1545-63) world that Anerio inhabited in the 1610s and the liturgical landscape of today, 50 years after Vatican II. Young Catholics hungry for what popes starting with John Paul II have called the “new evangelization” are open to prayer and music that are more accessible and attuned to cultural influences they find resonating inward from outside the Church’s walls.

Studying Anerio’s “spiritual madrigals” during his dissertation year in Rome, Wright, who may claim among his credits a Latin Grammy award for performance and a No. 1 album — O Emmanuel (2016) — on Billboard’s classical album chart, drew upon five of them to inspire Drama and Devotion. The result is a quintet of original jazz contemplations of the stories of Abraham and Isaac, the prodigal son, the crucifixion, the resurrection and the conversion of St. Paul.

The June 1 concert at Chiesa Nuova featured Wright on piano leading an ensemble with guitar, bass and drums and a choir combining students from Notre Dame and the Pontifical Insitute for Sacred Music. Let’s listen in: