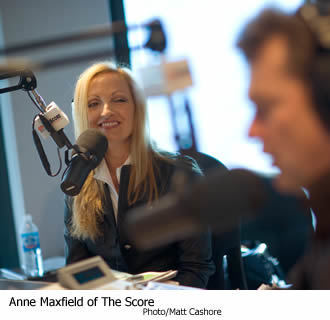 Anne Maxfield ’79, whether she likes it or not, is always surrounded by men. It started with male-dominated radio. Then it got worse by specializing in über-male-dominated sports radio. Then she went and added a husband and son. But, truthfully, she’s thrilled with the excess testosterone, whether it’s picking up her boisterous 9-year-old from school or yapping on air about the Chicago Bears with radio host Mike North, who sounds like the lovable Super Fans skit on Saturday Night Live come to life (“Da Bears-s-s-s-s!”).

Still, it wasn’t always so easy for this on-air Chicago legend, whose career started decidedly off track. “I finally broke in a few years after graduation with a minimum wage job at country radio station WUSN,” Maxfield recalls. “It’s never easy for a woman. One of the deejays used to show me his penis because he thought is was funny.” But this was 1984, this was her big break and this, according to Maxfield, was no time to be reporting sexual harassment. “You know what?” she says. “Radio people did crazy stuff around each other anyway. Some things were because I was a woman, but others were because these people were nuts.”

Maxfield also knew that the unemployment line was filled with radio talent, including her several times, so she felt complaining would only make a difficult road rockier. In fact, it wasn’t until her job with Bob Collins at WGN in 1992 that she really felt comfortable that she’d found a home, found someone who respected and was willing to mentor her.

“Bob was someone you could always learn from,” she says. “He was the No. 1 radio guy in Chicago at the time. An excellent interviewer, he could make a bit out of anything and taught me how to think on my feet and try to make great radio immediately. The best radio you hear is stuff that’s not planned, it’s sitting in your car with the ‘theater of the mind,’ those pictures that the host creates for their listener.”

Unfortunately, one unplanned radio moment on February 8, 2000, was the death of her greatest teacher. “While on-air, we reported on a plane which crashed into the top of a building,” she says. “We had no idea the pilot was Bob. I felt numb for days when I found out, like I was coming out of my body and watching myself from the corner of a room.”

She was fortunate to find another great to team with in radio host Spike O’Dell, who was also at the station that tragic day. “She worked so well with Bob and never missed a beat with me,” he says. “Annie has that hallmark for sports—don’t bluff her because she knows what she’s talking about. She’s also a very pretty, elegant tomboy, and I don’t think she’d get mad at me for saying it. She knew this was a guy’s world and understood it.”

So much so that she landed her present gig on the Score in 2004, an all-sports radio station also in Chicago. “Mike North had a popular show, and he looked at me across a room and it immediately dawned on him that my style would work with his,” she says. In fact, it was Anne’s husband, Harvey, a radio station manager, who had encouraged North to get on the air years before, discovering a hot dog vendor and admitted high school dropout who could school anyone in sports, all while asking if they wanted relish or ketchup on their dog.

North remembers seeing Maxfield as “the voice of reason,” a contrast to his sometimes heated persona. “Annie is always ready with the human side to sports,” North says. “I always look at winning and little else. ‘Did the team get it done or didn’t they?’ For her, she thinks about what they were feeling, what they’re going through, and it really adds perspective to what I do.”

Sports Family
Even though Maxfield loves sports, she’s quick to admit that she fell in love with radio through rock ‘n’ roll, her son named for legend Bob Dylan. Regardless, it was her sports connections once again that truly won her son over one special morning. “I got Dylan in on the day race car driver Jeff Gordon was at the station,” she says. “He’s a hero to Dylan, and we even got both of them talking on the air. It made me so happy to do that for him.”

Her job also floors her father, Ellsworth Cordesman ’48, who introduces her not as Anne but as “Anne Maxfield of the Score.” And it’s not just talking sports, but constantly going to sporting events that has been a cornerstone of her family life. “Baseball games, NASCAR, it’s something that brings all of us together,” Maxfield says. “My father and I connected by watching hockey games. I even just got back from Martinsville for a race, and my family had the best time. People think sports doesn’t matter, but it does.”

It mattered all the way back to her grandfather, Joseph Cordesman. He was a bat boy for the Detroit Tigers and even got an autograph from Ty Cobb, considered by some to be the greatest baseball player who ever lived. It’s Maxfield’s most prized possession, a reminder of how sports is forever in her blood. “My dad has the 1917 Tigers cap, and he’s not giving it up,” she says with a laugh.

An Expert Within Reason
Even though Maxfield would easily be considered a sports expert by the average person, she knows sports radio demands more. Rather than position herself as the guru, she proudly represents the common person’s view, posing the kind of questions a fan would ask and leaving who won the National League pennant in 1961 to be remembered by one of her co-workers.

“I learned a long time ago that a woman in this business needs to know five times as much as a man to be taken seriously, and when she makes a mistake it’s pointed out much more often. By not overstepping my knowledge I gain credibility and have my own part of the show instead of getting into competitions I don’t need to be involved in.”

A prime example of her strength happened just days after national personality Don Imus was thrown off the radio for derogatory remarks about members of the Rutgers women’s basketball team. North was nervous about discussing it and says he felt at ease by Maxfield once again providing her point of view. “I asked the men in the room if they’d want their wives or me to be called ’hos,’” says Maxfield, letting out a long chuckle. “I think you know their answer.”

A New York-based freelance writer, Eric Butterman previously contributed profiles of directors Tony Bill ’62 and M. Clay Adams ’32 for this magazine. He can be reached at ericbutterman@yahoo.com.