Every year — along about commencement season — the Notre Dame lakefronts become toddler playgrounds for fuzzy little ducks and geese. Waddling in the grass, stumbling and scooting to keep up, trailing mothers single file, they eventually skim the placid waters like little bathtub toys.

And every year I think back to 1974. It was dawn. I had been up all night. Senior week with friends and we had concluded the evening with a trip to Fat Shirley’s and — by now somehow carless — walked back to campus from that distant, frontier greasy spoon. We arrived on the shores of Saint Mary’s Lake just as light peered into the day, greeted by a regatta of paddleboat ducklings in the fresh morning sun. 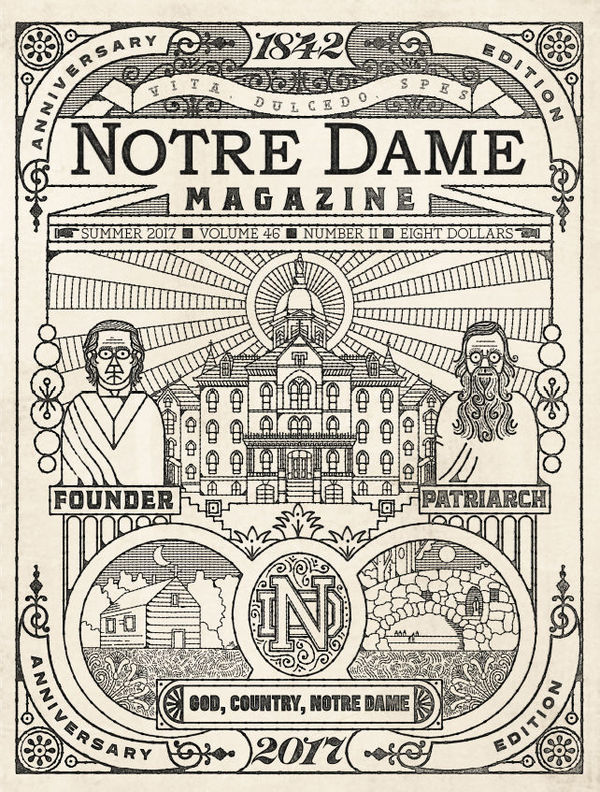 I remember thinking then of the cycles of time and season and renewal, and how new and future generations — human and fowl — take their turns here.

It wasn’t that long ago.

It seems like a few months ago that I was back here writing about Notre Dame, trumpeting its research aspirations and extolling its Catholic nature, when I had this eureka moment during a talk with professor and University historian Thomas Schlereth ’63. “They pull in opposite directions,” I blurted out, as if the original discoverer, with Schlereth patiently explaining this had always been the case. The tug-of-war goes back at least to Morrissey and Zahm early in the 20th century, with evidence that such tensions between intellectual pursuits and Catholic character existed even deeper into Notre Dame’s past. And should persist in healthy equilibrium.

One of my all-time favorite editions of Notre Dame Magazine was our sesquicentennial issue. For the 150th anniversary, we devoted every page to Notre Dame history. We put that issue together, lovingly, in a makeshift classroom in the Main Building because the ceiling of our fourth-floor office suite had caved in.

This was back when the building’s fifth floor was condemned, half the fourth floor was closed off and vertical braces were installed in sagging stairwells as reinforcement against major collapse. Our ceiling damage, though, exposed these great wood beams that had stood gallantly for a century. We marveled at the skill and effort it must have taken workmen in those days to hoist them high into place so long ago.

That was in 1992. It doesn’t feel like 25 years have passed since then. But here we are, working on an issue honoring 175 years of Notre Dame history — perhaps not executed with the ambitions that a 150th or 200th birthday would call for. Still, there are good stories here and reflections on religion in America and the meaning of a Notre Dame education and a potpourri of noteworthy moments in time.

Over the years character emerges, characters become legendary and the tensions that animate the place become hallmarks of its identity. Notre Dame’s nature is found in those elements as perennial as successive generations and as unique as unseen, square-hewn timbers positioned so capably they serve the test of time.