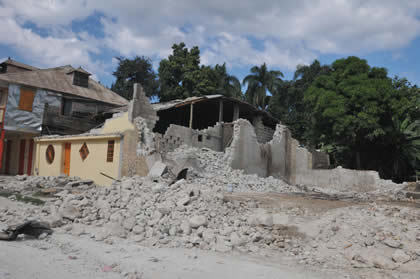 The first call was a phone message left during the weekend after the Jan. 12 earthquake fractured Haiti. It came from Ann Kloos, who graduated from Saint Mary’s College in 1973. Her brother John, a 1974 Notre Dame grad, had lost his son Ryan in the quake. His daughter, Erin, had been critically injured. The doctors working on her crushed body, transported to Miami, said she would not have survived another 24 hours without their care.

Ann and I talked Monday, and a string of emails were soon forwarded to me, as well as to their family members and friends. Ryan, 24, and Erin, 26, both of Phoenix, had been working as international volunteers for Friends of the Orphans.

Those threads of a family’s grief, courage and hope spoke eloquently of the disaster in Haiti, making it personal and real to those of us watching from a distance.

Emails indicate Ryan had only been there five days when the earthquake struck. Erin was severely hurt, with internal injuries and badly damaged arms. One of the first dispatches, from one family member to others, says of the parents: “Most importantly, they are with Erin right now. She arrived in the middle of the night and was treated immediately. She is responsive and knows they are there. At this point, they still wish everyone to be supportive from afar, and as soon as they want visitors or anything else, they will call on you. Secondly, NPH and other groups are confirming that Ryan was killed.”

John’s January 22nd email reports: “I just got back from a one-day trip to the Dominican Republic where I picked up Ryan’s ashes.” After that journey’s narrative, he writes, “Did I mention that I got to give Erin a real hug on Thursday? We were going from the bed to the chair and there had been enough wires removed that I actually got to hold her while she was standing upright. Damn. That felt good.”

Notre Dame has had a presence in Haiti for years, largely through the work of Tom Streit, CSC, and his medical research and service team that includes doctors, alumni and Notre Dame students. Streit’s clinic was at the epicenter of the quake. Fortunately, his prescience led to Notre Dame engineers constructing facilities to withstand an earthquake.

On January 27, I received an email from Linda Mans Leary whose son, Joey Leary, a 2009 ND alumnus, was working with the Notre Dame Haiti Program and was with Father Streit and others at the Hotel Montana when the earthquake hit. She attached his account of that and his experiences over the next 48 hours, and it’s here for you as well.

And the emails and stories continue to come in, and as they do, we’ll post them here. So read on and come back again.

Meanwhile, scanning through more emails from John Kloos forwarded my way: “Erin is out of intensive care. She has been able to get out of bed twice and has spent some time sitting in a reclining chair, simple tasks that mean a lot right now. The next guilty pleasure she’s looking forward to is getting her hair washed with real shampoo and water. . . .

“The difference between what we saw last Friday morning and the Erin we are looking at today is nothing short of amazing. However, when you finally get to see some pictures of her, please be ready and don’t panic. She has been through hell and there are marks from that journey. But they are just marks. The Erin underneath is going to come out whole.”

That is a prayerful hope we wish for all who have survived and all those affected by this tragedy.