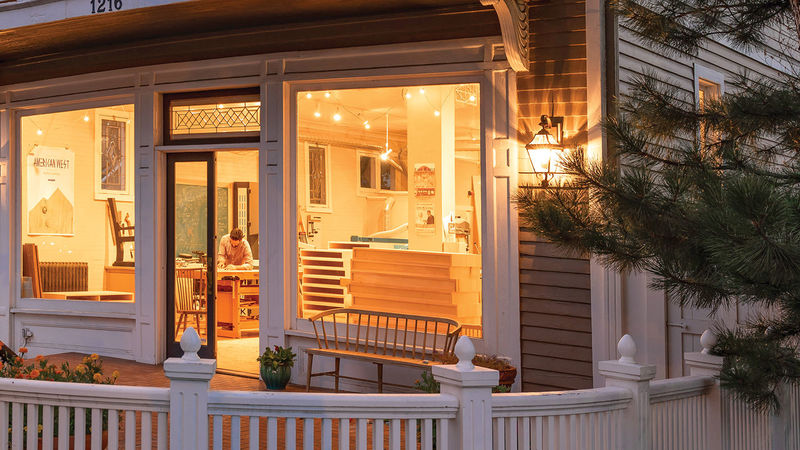 It was Father Ron Raab, CSC, ’78, ’82M.Div., ’90M.A. who in 2014 first reached out to my husband, Geoffrey, a parishioner and furniture maker, and asked him to help restore Sacred Heart Church. I knew that the 100-year-old Spanish mission-style building was in disrepair. Sacred Heart, a Holy Cross parish serving a low- to middle-income congregation on the west side of Colorado Springs, was falling apart. The roof leaked, the ceiling tiles were stained, the foundation was faulty, the pews squeaked, the windows were plastic, the carpet was held together by duct tape.

Geoffrey ’00M.A. felt called to the work. His great-grandparents were church builders in the American Southwest. I knew he would do it right and create a cohesive whole, but I also had a sense of what a massive undertaking it would be.

He told me he intended to design and build most of the interior elements of the space: pews, chandeliers, candle stands, sanctuary furnishings, tabernacle, doors, shutters, baptismal font — everything. Even with a team of artists, including Elizabeth Frick LaDuke ’03, to collaborate, I worried Geoffrey was taking on too much.

About that same time, on an anniversary trip, we walked past a beautiful old church in Leadville, Colorado — at 10,152 feet, the highest city in the United States. Annunciation Catholic Church was closed and also in need of restoration, but you could see marble floors through its stained-glass windows. It struck me that people who lived in miner’s shacks built cathedrals at the timberline by hand. Even in the midst of deprivation, hardship and lack of creature comforts, these people valued beauty, truth and goodness.

We used to value sacred space. Today we have more amenities and a much more comfortable lifestyle, but don’t want to take the time and put forth the effort as artists to do it right. I couldn’t say no.

We had spent the previous decade creating a handmade furniture business, with all the highs and lows and 100-hour workweeks that go along with it. We had restored the 1887 grocery where we now live and have our studio (see pages 50-51). When we bought it, the upstairs apartment hadn’t been lived in for more than 30 years. Geoffrey took it down to the exterior studs to rebuild the walls, floors, ceilings and trim. So I had some sense of the sacrifices that a huge church restoration would entail for our family. Just to build the 14-foot exterior doors, for example, we would need to completely refit our shop and reinforce its floors.

“People kept asking, ‘What’s it going to look like? Why don’t we have photos? What are we doing?’” Raab recalls. “Because Geoffrey’s designs didn’t come out of a catalog, we couldn’t tell them exactly what it was going to look like.” Four years after having the idea to restore it, and after a year of being closed, the new Sacred Heart Church was rededicated on May 23, 2018. “After we blessed the doors,” Raab adds, “people walked in for the first time and I saw tears in their eyes. That was the moment of dedication for me.”

In the end the most moving aspect of building a church with a team of artists is that a church is for everyone. Most art hangs in a museum, belongs to a wealthy collector or sits in a vault. But a church belongs to the laborer, the poor man, the homeless person, the wealthy CEO. It’s everybody’s church — a refuge and repository of beauty for anyone sorely in need.

Geoffrey Keating, who has graduate degrees in theology from Yale and Notre Dame, is co-owner with his wife, Anna, of Keating Woodworks and Sacred Spaces. She is also the co-author of The Catholic Catalogue: A Field Guide to the Daily Acts that Make Up a Catholic Life.