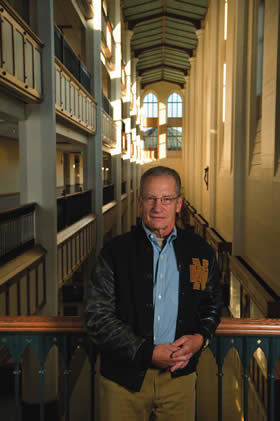 In the days, months and years since the collapse of the World Trade Center’s twin towers, hundreds of thousands of American youths have signed up for military service to sacrifice life and limb for the welfare of their fellow Americans. Dr. Kenneth Graf ’66, a surgeon near Harrisburg, Pennsylvania, and member of the U.S. Army Reserves, has spent much of that time trying to keep them from having to.

Since enlisting in the U.S. Army Medical Corps in 2003, Graf, now 67, has been deployed as a combat surgeon to various battle zones in Kosovo, Afghanistan and Iraq, and served a tour at the U.S. military hospital in Landstuhl, Germany. He’s been on active duty around 18 months over the past eight years.

The first war zone Graf witnessed, however, was in Lower Manhattan in November 2001, as he looked on with his wife, Lynn, at the devastation wrought by the deadliest attack on American soil since the Second Battle of Bull Run.

“It was still smoking and smoldering at the time,” Graf recalls. “I knew our country was going to have to do something, though I didn’t know what they were going do. So I talked to a recruiter and asked if they’d need a surgeon.”

Graf, a draftee during the Vietnam War, had served one stint as a medical officer in the armed forces three decades earlier, mainly performing physicals on draftees stateside. Despite his 25 years of private practice experience as a general surgeon, it took a while to get a recruiter who would accept the then-58-year-old’s offer.

Although Graf did meet a few surgeons about his age during basic training in 2003, it was rare enough to warrant a nickname during his training. “They called me Grandpa in the tent. And that was about right,” says Graf.

While no number of private practice surgeries can truly prepare doctors for the horrific wounds they witness in combat, Graf says that the time in which he began practicing medicine — before the technologies widely available now and the specialization they’ve ushered in — helped prepare him to treat the broad range of injuries he’s seen under the austere operating conditions of theatres such as Iraq and Afghanistan.

“We did some brain surgery, chest surgery, just about anything you could think of,” Graf says. “It was a challenge to keep them alive.”

In his most recent tour in 2010, Graf led a team of three other surgeons and about 16 medics as the chief surgeon of the small Forward Operating Base Sharana in the Paktika Province of Afghanistan. The base is along the Pakistani border and, Graf notes, “far from all the hospitals.” Though the temporary tents eventually gave way to manufactured steel buildings, Graf’s team never had an X-ray to diagnose injuries. Instead, the medical workers relied heavily on versatile ultrasound machines and first instincts reinforced through military-specific training like the two-and-a-half week crash course his team received at a trauma center in Miami.

“We usually use our own clinical judgment and our own exams,” says Graf.

Whether sawing open a skull or reconstructing a vital artery, cradling a young life in one’s hands is never a more awesome responsibility than when the solider is on the table because he decided to put the lives of those back home into his. And the reward for keeping a soldier alive under unkind odds is both professional and deeply personal.

“That’s what keeps you going. Those kinds of moments are priceless and unforgettable,” Graf says. “You think, ‘This is why I‘ve trained. This is what I’m here for. This is my vocation.’”

The primary focus of combat surgeons faced with the often horrific trauma injuries seen only in war is “damage control.” Graf and other combat surgeons do their best to stabilize a patient as quickly as they can with the limited resources available.

“You stop the bleeding,” says Graf. “And you say a prayer and hope for the best.”

And you waste no time moving on to the next person who needs care.

If more complicated surgery is needed, the protocol in Afghanistan is to prepare a soldier to be able to survive a helicopter ride to Bagram Air Base — since 2007, a full-fledged permanent hospital — or a flight to the Landstuhl military hospital in a C-17 Globemaster flying hospital.

Not all of the people Graf sees, however, have the benefit of air care available to them. As is one of the collateral tragedies of war, many of those Graf has treated have been civilians with nowhere else to turn. Civilian pediatric injuries in particular have been estimated to account for 12 percent of hospital bed time in U.S. medical facilities in Iraq and Afghanistan.

Graf recalls an episode in Tikrit, Iraq, when a 77-pound girl, reported to be 16 years old, arrived in hemorrhagic shock after a gunshot wound to the pelvis. Because of the girl’s malnourished state, Graf’s team had to adapt from how they’d treat military personnel in the same situation throughout her 83-day hospital stay that required 30 operations.

Two thousand miles away in Afghanistan, however, that treatment would have been unthinkable during his first tour there in 2005. As much as he and the other surgeons wanted to help, a decade of Taliban rule and its lingering influence meant civilian families would rarely permit U.S. male doctors to treat female civilian patients. By 2010, Graf says, the attitudes of civilian families appeared to have changed significantly.

“That was something we’d ask a husband or father, and they’d say, ‘Do everything you can to save the life of my wife or daughter,’” Graf says. “They were only too happy to have anyone taking care of their loved ones.”

Just as important, Graf adds, is the support U.S. doctors have received from their commanding officers, typically soldiers with some kind of medical background, whom he has never seen turn down a request to care for civilians. In contrast to the brutality met by captured U.S. and coalition forces, Graf points out the unique position of U.S. surgeons, who have treated Taliban rebels who are brought to the hospital and, in some cases, are flown for follow-up surgery to Bagram Air Base.

“I’ve been fortunate never to have to decide between postponing surgery for an enemy soldier to care for a U.S. or coalition soldier,” Graf concedes. “It’s just good fortune for me not to have to live with that kind of decision. My mission [as a doctor] is life goes first. It doesn’t matter whether it’s yours or theirs. You have to do what you have to do. You take an oath.”

In many cases, the sense of responsibility of the U.S. military to the civilians unwittingly caught in the crossfires of a war they didn’t ask for has not ended on the operating table. Graf highlights the perilous missions of the 101st Airborne Division “Screaming Eagles,” famed for their participation in D-Day, the Battle of the Bulge and Hamburger Hill, who would arrange to return dead Afghanis from the hospital at Bagram Air Base back to their villages to be buried before sundown, in deference to Muslim custom.

“They didn’t have to do these things. It wasn’t a stated mission,” Graf says. “To protect the culture to that extent is pretty special, and I don’t know any other group or country that might do that.”

Relationships formed during war are done so at one’s own peril when they can be severed in the blink of a roadside bomb. For every friendship Graf made, such as a local Afghani surgeon who made countless trips in the cover of darkness pooling civilian patients to and from FOB Sharana, Graf has heard stories like that of a 7-year-old child killed by Afghan rebels because his grandfather was providing assistance at the base.

“Those are the kinds of things you take home and you don’t forget.”

When he’s not abroad or training to go, Graf’s full-time job at home is as a general surgeon at Lebanon VA Medical Center in Lebanon, Pennsylvania, where he’s worked the past four years. How long Graf will remain home, he doesn’t know, but he suspects the day may be coming soon where he’ll be asked to hang up his fatigues and stick to caring for patients more often closer to his age.

“When I’m 69, they’ll probably say ‘Thank you for your service’ and give me my honorable discharge from the military. But we’ll wait and see. That hasn’t happened yet. With my health I’ve been really blessed to be able to do these things, and I still will as long as there’s a need.”

Tim Dougherty, who interned at this magazine, is a writer living in Washington, D.C.