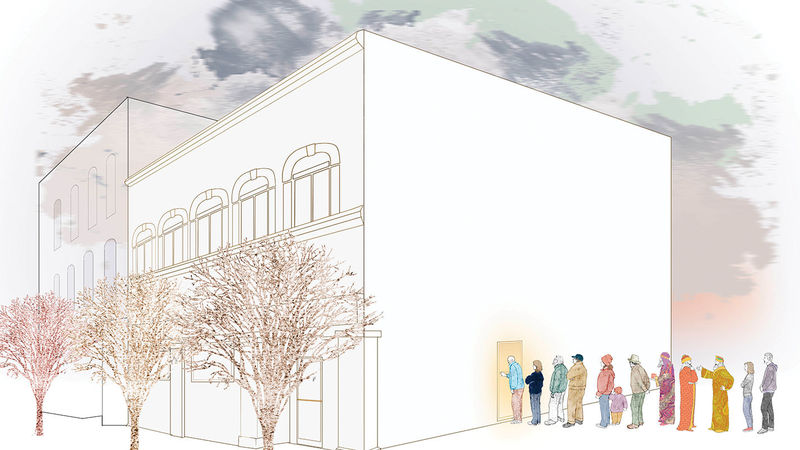 Late in that very rainy autumn the good citizens of the river city of Olean, New York, debated whether to permit a soup kitchen into their downtown business district on North Union Street. Out in the valley, the Allegheny breached earthen dikes, and while the Red Cross helped rural residents made homeless by icy and muddy water, I attended a dry and slightly contentious public meeting about the soup kitchen. There I heard a lady ask how the kitchen was supposed to benefit downtown businesses. Perhaps because the meeting was held in a church, with Christmas near and with small waves lapping at the edges of town, I sensed in her equally plaintive and scornful query an old Christian thorn: So how on earth is Jesus supposed to help the economy?

The soup kitchen was known as the Warming House. Several blocks from downtown, it had blessed the poor until the building where it rented space was sold and the leases terminated. A businessman offered the charity new rental space on North Union Street, as well as a $5,000 donation for renovation of the site, but most of his fellow Olean merchants objected to the purposed mingling of commerce and altruism on grounds that the poor would repel shoppers from downtown. Quite a few of the downtown businesses were already struggling to stay solvent.

Some citizens did indeed consider the Warming House guests to be repugnant. “These people,” a dentist complained in a letter published in the Olean Times Herald, “congregate for free food and give nothing in return. They have no responsibility and demonstrate their poor manners and lack of respect on a daily basis.” About the rabble on the sidewalk fronting the Warming House, some of whom occasionally cursed and littered, he added, “In warm weather, it is a dirty disaster. At least with our long winters, it moves inside more.”

Meanwhile, quite a few citizens took shelter from the rain to write letters in support of the kitchen.

I know someone who was shocked by the dentist’s holiday season sentiments, but I suppose my acquaintance hadn’t paid attention to the fiery radio sermons of Rush and Glenn, or teed up in the immanency of golden sunshine at the right country club on the right Sunday mornings. And no doubt my acquaintance was unfamiliar with the poverty cure peddled by former South Carolina Lieutenant Governor Andre Bauer, a direct moral descendant of the enterprising narrator of Jonathan Swift’s “A Modest Proposal.”

On the 2010 gubernatorial campaign trail, Bauer said, “My grandmother was not a highly educated woman, but she told me as a small child to quit feeding stray animals. You know why? Because they breed. You’re facilitating the problem if you give an animal or a person ample food supply. They will reproduce, especially ones that don’t think too much further than that.”

Mercifully, no southwestern New York politician from the School of Malthus offered a winsome plan to end regional poverty — and shortly before Christmas, by a vote of 4 to 2, the Olean Planning Board granted a permit for the soup kitchen to open in the downtown business district.

So why, three years later, do I still hear the austere lady who asked, “So how’s a soup kitchen supposed to help business?”

In the dry warmth of the Baptist church, she sat quietly on the pew in front of me until a friar from St. Bonaventure University, which sponsors the soup kitchen and where I am employed as a tutor, finished the unpleasant task of explaining how guests of the Warming House would be made invisible or fleeting to mollify merchants who fretted that consumers on their way to the jewelry shop would rather not encounter any poor soul or poor devil dressed in rags.

Guests would be prohibited from entering the kitchen from busy North Union, required to enter instead from an alleyway, where a vestibule would be built. Absolutely no loitering would be tolerated near the Warming House. Guests would be prohibited from leaving their bicycles on the sidewalk. And their wheelchairs. Although I heard no promise or request that the Warming House shades be kept tightly drawn lest an impressionable child peek inside and be lured into a life of freeloading, it was clear that the homeostasis of delicate consumers required environmental protection.

The friar had finished making the politically necessary promises when the lady in front of me stumped him by asking, in effect, how a soup kitchen could possibly feed the bank accounts of businesses. Several seconds passed before a bearded gentleman broke the bewilderment and silence by urging that the Warming House staff inculcate their guests with self-reliance. A professor of philosophy then stood and compared blame and dislike and fear of the guests to historical Hindu attitudes toward the Untouchables in India.

In my seat on a back pew, I drifted off a while. It seemed I had listened to the same discussion for a long time, longer than possible. It seemed that the debate in Olean had endured since at least since 1841 when Ralph Waldo Emerson asked dismissively, in his seminal “Self-Reliance,” “Are they my poor?”

It seemed, too, that the philosophy professor’s Hindu analogy understated the problem: that though they might condemn the poor to starvation, the Andre Bauers of our land are comforted by the presence of poverty. In certain Hindu temples, it was supposed that an Untouchable could have a better, if reincarnated life, but there in a Christian church, as citizens discussed the pros and cons of charity in relation to the lodestone of the economy and light of business, I was reminded that to some Americans the poor are the hopelessly damned, orphaned in the mangers and ghettos by a mercantile god, condemned to spend this life in an economic netherworld, where — now and then mentioned by journalists, clergy or other sentimentalists — the poor are evidence that the affluent are saved. Proof that a poor man is as likely to pass into heaven as a camel through the eye of a needle.

And what could possibly move the elect to love those whom such a god never would?

Yet three teenagers were moved, rising diffidently from a pew, coming forward haltingly to present to a University official a donation for the Warming House. They belonged to a community-service club at Olean High School, and with dozens of other students had gathered pledges before spending a night in cardboard boxes on the school grounds to demonstrate sympathy for the poor of the world. The appeal of their peculiar innocence and the goodwill of many in the community were such that the check, representing a portion of the money raised for local charity, was for $4,700. The applause had become persistent when the lady in front of me positioned her hands, and then, turning her head sharply right, she paused with seeming reluctance.

But presently and delicately, she did it.

She clapped for the three who brought gifts.

Mark Phillips is the author of the memoir My Father’s Cabin. His essays have appeared in Commonweal, Salon, The Sun, New York Times Magazine and in many other journals.