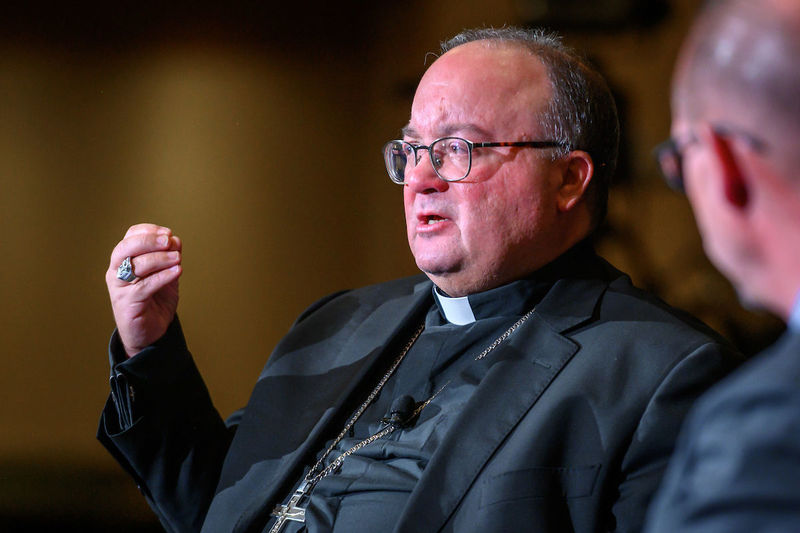 “We have to own up to abuse where it has occurred," Scicluna said during his Notre Dame Forum visit. Photo by Matt Cashore ’94

The sexual abuse crisis in the Catholic Church will never be solved without the active involvement of lay people and a willingness to listen to survivors, according to Archbishop Charles Scicluna.

“We need to empower our community. Our community needs to learn how to protect itself,” the archbishop said November 13 at a Notre Dame Forum event at the Duncan Student Center. Previous Forum events included a panel discussion featuring Juan Carlos Cruz, a clergy sexual abuse survivor and advocate for victims, and others who have worked toward reform.

Scicluna, the archbishop of Malta since 2015, also is adjunct secretary of the Vatican’s Congregation for the Doctrine of the Faith and a leading investigator in the Catholic Church’s fight against sexual abuse.

Scicluna said the 2002 Charter for the Protection of Children and Young People that the U.S. Conference of Catholic Bishops adopted wasn’t comprehensive enough because it excluded bishops from the disciplinary provisions that applied to other priests and deacons. New policies could have a greater impact.

He referred to a new church law established in May by Pope Francis that requires all Catholic priests and nuns to report clergy sexual abuse and coverups to their superiors. The law provides protections for those who make reports and requires all dioceses to have a system in place to receive the claims confidentially. Some abuse victims have been critical of the measure, noting it doesn’t require that the crimes be reported to police.

The problem of sexual abuse is everyone’s concern, the archbishop told the audience: “Ask what you are going to do to be part of the solution.”

Scicluna is known for his willingness to meet with and listen to victims of clergy sexual abuse. He is credited with leading the cases against Legionaries of Christ founder, Rev. Marcial Maciel Degollado, and Scottish Cardinal Keith O'Brien, and for convincing Pope Francis to take steps against several bishops in Chile.

“In order to understand the egregious nature of the abuse of minors, you have to meet victim survivors,” Scicluna said, describing those encounters as sacred ground. “You’re meeting a human being who has been hurt and betrayed on a level we cannot really understand.”

Scicluna was asked for advice on how young Catholics should address scrutiny from their non-Catholic friends regarding the clergy abuse scandal and the credibility of the Church.

“Humility, I would say,” the archbishop said. “We have to own up to abuse where it has occurred. Not to deny it, as that would hurt us.”

Young Catholics have the right to be angry and frustrated at the Church because of the abuse crisis, Scicluna said. “They should engage non-Catholic friends and talk about getting together to avoid (sexual) misconduct and to prevent it” in religious organizations, in families and in the community in general. “It’s a wakeup call,” he said.

A Legionaries of Christ priest in the audience thanked Scicluna for his work in helping to reform their order and asked how members can break free from the lies of the past. The archbishop said Jesus has to be at the center of the faith, not spiritual leaders who develop into cult figures.