Doug Garofalo ’81 says he strives to create forms that have never been seen before. If you doubt that, consider the Chicago architect’s design to update the Manilow House in rural Wisconsin, pictured here. Oh, sure, the gabled main house and red-barn wing of the family’s summer home may look like a conventional Midwestern farm house at first glance. Yet there’s certainly nothing traditional about that titanium-clad roof oozing over and around the home. 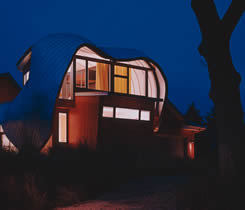 Clearly, Garofalo is no classical architect. He is, however, one of the hottest designers around in the judgment of a growing number of critics as well as the Art Institute of Chicago, which recently housed a four-month-long solo exhibit of his designs. Joseph Rosa, the Art Institute’s curator of architecture and design, says that while the 47-year-old architect is still at an early stage in his career, the recognition for his inventiveness is long overdue.

The Chicago Sun-Times architecture critic Kevin Nance judges that the Art Institute show plus Garofalo’s recent transformation of an old University of Chicago Press building into the Hyde Park Art Center have moved him from the “up-and-coming” category to “finally arrived” as a new architectural force. Nance is especially enthusiastic about the Hyde Park design, which features a novel “digital marquee and high-tech canvas for new-media artists” created each night when a series of curtains automatically roll down from the main gallery ceiling and projectors begin flashing images. Shadows from a pedestrian catwalk add an unexpected dynamic quality to the display.

Some of Garofalo’s work—especially the Manilow House—has been compared to the fluid, free-form buildings of Frank Gehry. While Garofalo is grateful for the compliment, he winces at the same time. “I love to look at the work of other architects,” he says. “But you can be too influenced in a certain way. I’m probably more influenced by artists and former teachers.” In fact, Garofalo, pictured left, says his former Notre Dame teachers Marjorie and Doug Kinsey, now professors emeriti of art with whom he stays in touch, may have inspired him as much as his architecture professors. Garofalo himself teaches architecture at the University of Illinois, Chicago.

The decision to incorporate curvilinear forms in the Manilow design didn’t come from any desire to imitate another architect, he says, but from his art-collecting client’s wish that the summer home have a “playful sculptural” feel. “We came up with this set of shapes that we saw more as a part of the landscape than of the building,” he says. “It was a chance to stretch some things we had previously done with curvilinearity.” Titanium, which has become a Gehry trademark, was employed simply because it works well in curved forms and doesn’t corrode.

In some measure Garofalo’s curved surfaces are produced by one of his trademarks: the creative use of computer design tools. A number of buildings in the Art Institute exhibit featured curved surfaces and asymmetric angles that the professor’s design firm—composed mainly of several former students—achieves in part with the use of some Hollywood magic: A film animation computer program adapted to architectural tasks.

“Animation is all about repetitive frames that slightly change,” Garofalo explains. Therefore, he says, it’s ideal in detailing structural elements that must change slightly, such as the supports of a curved structure. The technique also offers cost savings because the plywood ribs in a curved structure such as the Manilow House roof can be produced by computer-controlled milling.

But swoops, swirls and melting blobs aren’t the only forms that define Garofalo’s designs. He’s been known to employ hard angles and hard edges in the service of a client as well. Speaking of Garofalo’s architectural vision, the renowned architect Stanley Tigerman told Nance, “His work goes beyond solid geometry. He has the ability, if not to think in three dimensions, then to convince you that he can.”

Garofalo’s plan for the Nothstine House in Green Bay, Wisconsin, is angular and swirly at the same time. It’s not often that someone encounters a building inspired by the hobby of slot car racing. But that particular passion of his client became the basis of the structure’s most striking feature: a gigantic bright yellow fiberglass band that weaves around and through the house. Another of the homeowner’s interests, birdwatching, is reflected in the design by a long, narrow observation walkway that juts out from the house like a gangplank suspended in midair.

A client’s interests or activities, the function of the building and the building’s site are among the considerations he takes into account during the design process. “We interview clients as much as they interview us,” Garofalo notes. “From all those considerations we might associate with something the client may never have thought of, and that, of course, is one of the reasons why people hire architects.”

One of those never-thought-of-before ideas is the basis for Garofalo’s fanciful but technically feasible contribution to Visionary Chicago Architecture, a recent book of architectural ideas for Chicago’s future edited by Stanley Tigerman and Bill Martin. The Garofalo firm’s scheme re-imagines the elevated train tracks of Chicago’s Loop as a space that moves beyond commuter trains to include everything from lap swimming pools, bicycle lanes and bowling alleys to—no kidding—farmland.

The design sees the Loop as a means to bring the country back into the city. In his New Loop Ecologies design, a platform above the tracks becomes a green, agricultural umbrella for the structure. Garofalo insists that the plan is eminently doable. “There’s technology for the planting beds, and animals are much more adaptive than human beings, it turns out,” he told Nance. “We even identified a parking garage on the west side of the Loop where the animals and farm equipment could come in.”

While the New Loop Ecologies project will likely never be constructed, it’s a safe bet Garofalo will continue to think the unthinkable. Another safe bet is that a fair amount of those thoughts will get built. The signs say his star is rising.