A few months into our lease, with a bottle of wine between us and Kenny Chesney on Pandora, my roommate and I mulled over the idea of buying a vacuum. Reasons in favor were beginning to stack up: The far corner of the living room was still scattered with Christmas tree pine needles, a rug had recently been purchased from (bedbugs be damned!) the thrift store and our baking sprees sometimes left a spray of crumbs across the kitchen. 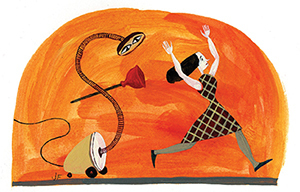 The recent drop of a wayward earring, and its retrieval from a small settlement of dust bunnies, is what brought on this conversation, but my roommate and I had for a while been struggling to face down reality. After years reveling in college freedom — from chores, from responsibility, from rent — we were now confronted with a small but palpable fear of domesticity.

I wondered aloud, nervously, “Are we really in that phase of our lives now? Are we vacuum owners yet?” It had happened so fast, going from a trusty DustBuster swapped among dorm mates to this. It had happened faster than a crumb falls. Just like that, and maybe we needed a vacuum.

All the things that existed, as if by default, in my childhood home — cleaning apparatuses and 37 spices and cabinets full of kitchenware — surprisingly did not come built into my first apartment. The first weekend in my new place, proud of myself and my adult life, I went grocery shopping, planned to make a favorite meal and let my roommate know dinner would be ready at 7 p.m. At 6:30, I found myself holding a can of black beans and wondering how to open a can without a can opener.

I had pulled open and rifled through and slammed shut all of our drawers, while thinking angrily, “Don’t kitchens just come with can openers?”

I fired off a desperate text to an older, wiser, experienced apartment-living friend, the type who had probably encountered this issue before. “Real life problem . . . how to open a can sans can opener?”

“Chainsaw?” The smirk shimmered behind his response.

I considered calling the elementary school boys I used to babysit. Would Boy Scouts have a trick for this? I peered into my closet, as if maybe a chainsaw, at least, came with the place.

Eventually, a Google search proffered “How to Open a Can with a Spoon.” The YouTube video was 71 seconds long. Twenty-five minutes and one badly bruised hand later, I extracted the last black bean from a small hole in my mangled can.

My roommate arrived home in the middle of the Woman vs. Can episode. She gracefully handled the news that dinner would not, in fact, be at 7.

For all the frenzied excitement channeled into setting up shop in that first apartment, in retrospect, I could have been slightly more pragmatic. Wandering Home Depot certainly would have been a better bet than Pottery Barn. The time spent looking for affordable yet chic throw pillows (hint: they do not exist), I wish I had instead spent finding a plunger. Another hint: Even YouTube cannot sufficiently answer the question of how to plunge a toilet without a plunger.

It is not all bad though; there are small, fleeting victories. I was quite proud of myself, for instance, when I “ironed” my shirt last week with my hair straightener. Who needs an iron?

In posing this (rhetorical) question to my mom later on, she cheerfully said, “Not you! But do you have an extinguisher on hand for when your clothes catch fire?”

Should we apartment dwellers know such things? I cannot even call to mind if we have a carbon monoxide monitor or even a smoke detector. I am not quite sure where the fuse box is and have no idea how to shut the water off — something that surely would have been good to know when our shower’s hot water handle became mysteriously stripped one morning, and the shower simply would not stop showering. Water sprayed down, and a hair-clogged drain had the tub filling, perilously, up and up. Naked and soaking wet is certainly not an ideal time to be on the phone with your landlord.

This past weekend, as a respite from adulthood, I tried my hand at paddle boarding in Lake Michigan. It was a wavy, choppy day on the lake, and it took a bit to get acclimated on the board. When a co-worker asked the next day how it went, I told her, “Every time I started to think I was good at it, I got knocked down.”

She nodded gravely and said, “Sounds like life in your twenties.”

This essay by Sarah Ceponis was one of four second-place winners in this magazine’s 2013 Young Alumni Essay Contest. The author’s first foray into adulthood was with an AmeriCorps year in Baltimore. Now she lives in Chicago and works for Back on My Feet, a national nonprofit that uses running to help those experiencing homelessness change their lives.