Alfred Stepan’s Notre Dame homecoming earlier this month was billed as an opportunity for scholars and students of politics and global affairs to hear him present his hopes on the timely topic of democratic governance in the Muslim world. But for Stepan ’58, a Columbia University government professor and former Notre Dame trustee, the visit was a chance to reconnect with a place full of that zeal for peace, justice and the art of the possible that have undergirded his distinguished academic career. 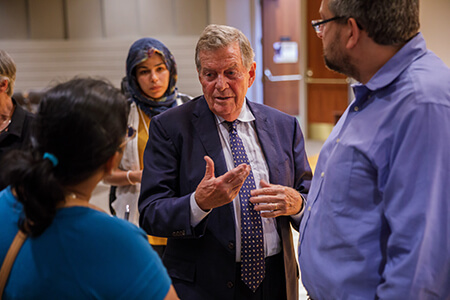 Stepan’s lecture, injecting optimism into the conversation about Islam’s compatibility with democracy, countered the current, influential assumption that the principles of Islam are irreconcilable with peaceful, democratic self-government. In his studies spanning some 40 years, he has found the world’s second-largest religion — with an estimated 1.6 billion adherents — “associated with several robust democracies,” such as Indonesia, Senegal, Tunisia and India.

Stepan began his remarks, sponsored by the Kellogg Institute for International Studies, with a brief tour of the world and acknowledged regions where democracy has not taken hold. But he focused on those four countries that have Muslim majorities or large Muslim populations and are widely respected in the international community for their democratic practices, progressive rules of law and the advancement of rights for all citizens.

Stepan credited religious leaders in those countries with establishing a democratic Muslim political theology that has opened doors of peaceful collaboration, drawing not from secular doctrines of unilateral religious freedom, but rather from statements in the Quran such as, “In matters of religion, there can be no compulsion.”

Total separation of church and state may not be sustainable in places where people incorporate their faith into their daily lives, Stepan said. However, he added, the broad perception among people of different faiths that they all share a religious dimension in their lives may reinforce national unity.

Stepan has made an influential case for “twin tolerations” that reinforce democratic ideals in religiously pluralistic societies: religious leaders must respect the legitimate authority of governing officials on the one hand, while the state must allow religious liberties on the other — not only the freedom to worship, but the freedom for religious individuals to advocate for the advancement of their values, so long as they don’t violate others’ civil liberties in the process.

‘The essence of serious institution-building is a passionate belief in what you’re doing and in recruiting people into the endeavor. They have to feel, and I have to feel, that what we’re doing is wonderful and possible, and we’d better get on with it.’

But Stepan warned that no single template for twin toleration exists. Instead, he said, success relies on citizens retaining their religious loyalties and tolerating those of others while the state fosters a culture of what he called spiritual “co-celebration.” How many holy days of its citizens’ multiple religions does a nation recognize as official state holidays? The answer to that question, he said, provides a kind of metric for democratic health in a context of religious pluralism.

While many European countries are “celebratory” of faith in that they recognize Christian holy days as official holidays, “Indonesia, Senegal, and India are co-celebratory,” Stepan said, because they recognize the holy days of majority and minority religious populations. “In Senegal, the population is 94 percent Sufi Muslim, but 40 percent of the religious holidays are for the Christian Roman Catholics — and the secular state subsidizes pilgrimages to Rome for Catholics.”

“We should expand our imaginations about the possible,” Stepan told his audience, who could be forgiven for thinking Stepan was talking about his work as a higher education leader and institution builder as well as the multifaceted subjects of his scholarship. “I’m always looking for something that’s possible, and if something is possible, do it.”

The message seemed appropriate for the Kellogg Institute to receive from a man who is rightly regarded as one of its founding fathers, and who described Kellogg as “one of the most innovative and important new institutions in the democratic and cultural life of the contemporary world.”

Such praise should not be taken lightly. After Notre Dame, Stepan studied at Oxford, served as an officer in the U.S. Marine Corps and an Africa and Latin America correspondent for The Economist before earning his Ph.D. in political science from Columbia in 1969. He has taught at Oxford and Yale and served as the first president of the Central European University, founded in 1993 with centers in Budapest, Prague, and Warsaw, and is one of a rare group of scholars who are members of both the British Academy and the American Academy of Arts and Sciences. He is also the founding director of the Center for the Study of Democracy, Tolerance, and Religion at Columbia.

His comments about Kellogg also derive from another part of his background — a personal history linking his family to Notre Dame and to the priest-president who launched Kellogg in 1982, Rev. Theodore M. Hesburgh, CSC.

Stepan’s strong relationship with Hesburgh began long before his appointment to the University’s Board of Trustees in 1985. Of course, when Stepan the student came to know Father Ted in the 1950s, the Holy Cross priest was already seen as a young example for the kind of possibilities Stepan advocates to students today. During the 1970s and 1980s, the two avidly discussed their world travels and reflections whenever they were both on campus. “He asked great questions,” Stepan recalled. “I always considered him one of America’s leading figures.”

By the time Hesburgh asked for the alumnus’ input on his plans for Kellogg, Stepan was already renowned for his work in comparative political science. Hesburgh said he wanted the new institute to take on a unique and important role in the field, and felt it would be something Notre Dame could do particularly well.

Stepan urged Hesburgh to place the new institute’s focus on the prospects for democratization in the developing world, particularly in a Latin America then plagued with widespread abuses of civil liberties. Kellogg soon attracted a steady influx of leading scholars who were optimistic about the prospects of emerging democratic transitions.

Reflecting on the institute’s growth, he said he was pleased that Kellogg’s first two directors — political scientists Guillermo O’Donnell and Scott Mainwaring — both had been students of his at Yale.

Stepan’s father Alfred Jr. ’31, an institution-builder in his own right as the founder of a major chemical company, was himself a University Trustee from 1958 to 1979. He, too, worked closely with Hesburgh and left an innovative legacy that includes the Stepan Center geodesic dome and the Stepan Chemistry Hall.

“The essence of serious institution-building is a passionate belief in what you’re doing and in recruiting people into the endeavor,” Stepan said after the lecture. “They have to feel, and I have to feel, that what we’re doing is wonderful and possible, and we’d better get on with it.” He cited Hesburgh’s work to fund the creation of places where civil society and deep faith went hand-in-hand as an example.

“You’re involved in something,” Stepan said. “It makes the whole thing more meaningful — and fun. What’s wrong with it being fun?”

Bill Schmitt is a freelance writer/editor who has written extensively on higher education, K-12 education and Catholic history and values. He lives in South Bend and his website is OnWord.net