Some stuff you already know. Some things will make you wonder. And some may reveal a less creepy side of the gang-hanging carnivores — things that Marcus Baynes-Rock, a Notre Dame postdoctoral researcher, discovered while spending 18 months with the bone eaters in Harar, an ancient city in eastern Ethiopia. 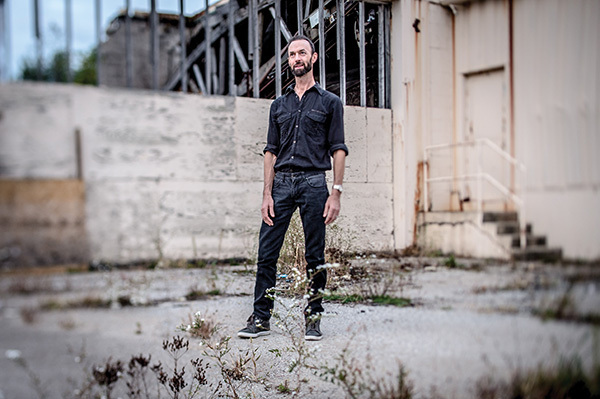 Most people know hyenas as a weird kind of ugly and ferocious wild dog that feasts on carrion and preys upon other wild animals, ravaging its victims in a voracious frenzy of pack attack. They not only laugh but they also howl, whoop, grunt, growl, yell and whine. They will prey on baby lions and fearlessly fight adult lions off their meals. They are known to kill humans and each other. And a group of hyenas can devour an entire zebra, leaving no remains — not even the bones — in less than 30 minutes.

So when Baynes-Rock, an anthropologist investigating the evolutionary relationships between humans and large carnivores, read of a place in Ethiopia where hyenas “walk in the streets without being molested” and are occasionally “fed by the inhabitants” and “become extremely tame,” he had to go see for himself.

“Hyenas are not well liked,” Baynes-Rock admits in his recently published book, Among the Bone Eaters: Encounters with Hyenas in Harar. “In general, hyenas are loathed, vilified, feared, derided, persecuted, and, where people have the wherewithal, eradicated.” But what the native Australian found in Harar was a fascinating relationship between humans and hyenas in which the two species have adapted to each other’s peculiarities to share some curious interactions.

Despite some canine similarities, hyenas are more genetically related to cats, mongooses, civets and such. They’ve been around for 22 million years. More than 4 million years ago, when our forebears left the treetops to hunt for food on the ground, “they put themselves in the path of ancestral hyenas,” Baynes-Rock writes. “The hyenas soon began crunching the bones of our diminutive bipedal ancestors, favoring freshly killed specimens over desiccated carcasses.
Indeed, the efficiency with which hyenas demolish carcasses is a major reason why fossil evidence of our species is so scarce on the ground. Were it not for the bone-crushing capabilities of hyenas, skeletal evidence of human evolution would be everywhere.”

Hyenas are no less fierce or gastronomically less efficient today. About 45,000 of them are roaming Africa, typically standing almost 3 feet tall and weighing from 90 to 190 pounds. They live in female-dominated clans — some with as many as 90 members in a relatively stable social hierarchy — and the alpha male takes a backseat to the lowest-ranking female. It is the female who takes the lead in courtship and mating, says Baynes-Rock, noting that hyenas are “loathed and derided for their confusing sexuality; the enlarged genitalia of the females lead people to see them as hermaphrodites.” Odd creatures, indeed.

The anthropologist also says hyenas may prey upon humans sleeping outdoors or sometimes break into huts and tents to “drag their victims away to be eaten.” Because of their nocturnal nature, vocalizations, physical attributes and behaviors, they are associated with witches, who, it is believed, turn themselves into hyenas to “prowl around at night looking for victims to eat.”

And yet the people of Harar have established a kind of conciliatory accord with their strange, wild neighbors.

Harar is a walled city thought to be about 1,000 years old. Its 88 mosques and more than 100 Sofi shrines support its claim to be the fourth holiest city in Islam (after Mecca, Medina and Jerusalem). Today it has some 100,000 inhabitants, and the Harari people have retained their own language, dress, architecture and traditions. The city’s walls offer six main gates and 16 hyena holes — the smaller portals through which hyenas come and go.

Written records suggest hyenas have been trolling the narrow streets of Harar for at least 500 years, helping clean the city by consuming its organic leftovers. The practice of actually feeding the hyenas might be traced to a 19th century famine, during which hyenas began attacking livestock and humans. Muslim saints advised the townspeople to put out bowls of porridge to placate the predators. Still today, every year on the Islamic holy day of Ashura, bowls of porridge are laid out for the hyenas, and the amount of porridge they consume is divined as a prediction for the coming year — whether it will be prosperous or difficult for the people of Harar, with bad omens necessitating further prayer and devotion to appease the spirits. This porridge offering, says Baynes-Rock, “reinforces the truce and ensures that no people will be attacked in the following year.”

While that ritual may lead to some interesting discussions on the interplay of hyenas and humans, folklore, religion and reality, it was the hand-feeding of hyenas that called the anthropologist to Harar. There he found a man who fed hyenas as a novel tourist attraction. Because of its history, architecture and Abyssinian heritage, Baynes-Rock explains, the city draws countless Africans as well as 6,000 overseas visitors annually, and the hyena-feeding is a quick-stop sideshow along the way.

But it also presented the anthropologist with a universal human-animal paradox: “The qualities of wild animals that make them attractive to tourists — their wildness, unpredictability and tendency to avoid humans — are the very things that must be reduced in order to make viewing possible.” As animals become more accustomed to humans, the degree of wildness is altered. Terms like “co-existence” and “harmony,” he says, “speak of a desire for a more balanced encounter, an encounter in the middle ground where nobody is really controlling the situation and the participants, including the hyenas, are all there on their own terms.”

He adds, “Whether this is achievable is beside the point; it is the desire for engaging the Other in the middle ground that is important, and this desire was being disregarded. Instead, the hyenas were being coaxed into the human realm with pieces of meat and made to conform to human needs.”

Baynes-Rock did find someone who fed hyenas without fanfare —Yusuf, the hyena man, who sat alone in the shadows, pulling scraps of meat from an old plastic container, extending them on a stick to Tukwondilli, Dibbey, Baby and others. Yusuf and his night-treading companions became the focus of the anthropologist’s study. Night after night Baynes-Rock sat with Yusuf, waiting peacefully in the darkness, earning his trust, watching the hyenas as they came straggling in, learning their names and unique personalities. As the weeks passed to months the farenji, the foreigner, finally also earned the trust of the hyena Kamareya. It was Kamareya, a young male, who patiently tutored Baynes-Rock on the world of hyenas — building the relationship on its own terms.

A bonding that began by Baynes-Rock being allowed to sit close, then permitted a touch, grew to include the anthropologist joining Kamareya on nocturnal rounds outside the city, roaming the wild country, with the hyena pausing and looking back over its shoulder for its slow-stepping companion to catch up. As the pairing evolved, Baynes-Rock became aware of the rich, complex communication shared by hyenas as they read scents, sounds and body language. “So far as I could tell,” he says, “hyenas signaled their fears, desires and intentions with much more subtlety than Kamareya used with me,” adding, “Poor Kamareya had to tolerate this witless human idiot who failed to read anything he was communicating other than a growl and a lunge, which were far more explicit than should have been necessary in the circumstances.”

The time Baynes-Rock spent with Kamareya and other members of the hyena’s clan expanded his understanding in other ways. The wild creatures, once objectified and once known only collectively and as a type of animal, became individuals, a diverse collection of personalities, temperaments and clan members. He watched as hyenas — said to be more intelligent than chimps — negotiated their place in the pack or let go of their pride to sidestep confrontation. He came to admire their resilience and began to think differently of himself when reflecting on the behavior of hyenas. “We learn by example,” he says. “By becoming others, we learn about ourselves. And as we develop relationships, we change them and they change us.”

Animals, he says, “are the same as us but in different measures.” They might not reflect as much on certain feelings as humans do, he says, but they do know fear and have “deep emotional feelings.” He adds, “When you start to value all the creatures in the world a lot more, it opens up a feeling of responsibility to act honorably toward them.”

The Harari have a different appreciation for wildlife than those of us insulated from the natural landscape, says Baynes-Rock. “In Ethiopia, people see themselves as part of a landscape that includes hyenas and in many ways are inferior to hyenas. I think when you live with large predators that have power over your life a bit, you have a different perspective on the world.”

For the people of Harar, hyenas are not only neighbors and guests but also are woven into the community’s culture, folkways and mythology. Along with the association with witches and the annual porridge feeding, believers see hyenas as emissaries from the spirit world. In Harar the word for hyena is waraba — newsman — and they are believed to bring news from the awliach, the saints, to hyena listeners who understand the messages and then deliver them to the Harari.

Hyenas also play an important role mediating between the Harari and jinn — invisible spirits, both good and bad, the anthropologist explains, who might “assist you on a path of spiritual enlightenment” or “deceive you and, given the opportunity, take possession of your being.” Those perceived as “crazy, uncontrollable, mentally disturbed, or possessed by a spirit” are said to be jinnam, and hyenas are called to help with exorcisms. “Hyenas,” writes Baynes-Rock, “can see and hear jinn and, given the opportunity, will catch and eat these otherwise unseen beings.”

Hyenas also are capable of sucking jinn right out of the ground. It is fairly common to witness hyenas “whoop,” jamming their noses to the ground and putting their entire body into the effort as they cut loose with a loud and resonating “oowhoop” — “just one piece of evidence of hyenas’ capacity to eat jinn,” says the anthropologist. Another outward sign is the vomit they later deposit outside Harar, which supposedly contains the hair of jinn, fingernails and sometimes fingers.

“Hyenas can cross boundaries,” says Baynes-Rock. “Hyenas are powerful, fearful animals in so many ways, and if you’re concerned about jinn, quite handy to have around.”