For Mayer, the fulfillment of a lifelong dream to sing in one of her art’s grandest international showcases comes at a time when opera is reaching out to new audiences. 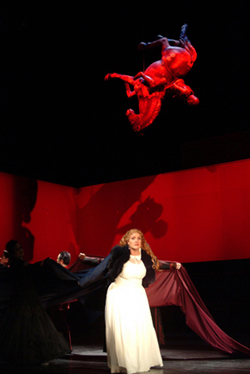 Mayer will be playing the role of Gerhilde in the Met’s exceedingly modern production of Die Walküre, the second and most well-known opera in Wagner’s legendary four-part cycle, Der Ring des Nibelungen. Gerhilde is one of the nine Valkyries, immortal warrior maidens whose duty it is to transport fallen soldiers back to their rightful place with the gods. It is a story about how the world was created and destroyed, one that has been told to Germans for hundreds of years and Mayer herself grew up hearing at home.

“I had this silly costume I used to wear when I was younger, and I certainly look like a Walküre,” Mayer said. “The stories of these different myths — Vikings and these kinds of things — Germans know as fairy tales.”

As this year marks the 200th birthday of the composer, opera houses all over the world will be putting on their own performances of the Ring cycle. The Met will do three complete cycles ending on May 11.

This version, directed by Canadian Robert Lepage, is probably not what Wagner had in mind when he wrote the operas in the mid-19th century. The cutting-edge set, a 45-ton machine made up of individually pivoting aluminum planks, uses hydraulics that move the stage up and down along with the opera’s music. The constant motion demands that the performers stay in top physical shape.

Gerhilde, who, along with the other Valkyries enters on a horse in traditional versions of the show, comes out in the Met’s production on a simulated horse that looks more like a teeter-totter than an actual wild beast. Negotiating the treacherous set is just one of Mayer’s concerns, though—she has to sing while doing it.

“It’s so loud when you have eight Wagnerian voices singing up on the stage. I’m wondering if I’ll be able to hear myself sing,” she said.

Despite the high-tech, state-of-the-art production quality, detractors of opera say that the art form has grown outdated, and the high cost of tickets limits its appeal to an exclusive, wealthy audience. Mayer disagrees.

“You’d be surprised how many people love opera, but maybe don’t mention it. I can remember stopping on the Toll Road once and a truck driver was pulled over listening to the Saturday afternoon matinee radio broadcast from the Metropolitan Opera,” she said.

Now, with the Met: Live in HD series, opera can reach a wider audience. Currently in its seventh season, the broadcasts stream live performances to 1,900 movie theaters in 60 countries. With 760 theaters participating in the U.S. alone, including Notre Dame’s Browning Cinema and Mishawaka’s Movies 14, more people can access high-quality opera in their local theater for only $20 a ticket.

“I once sent my Italian diction class from IUSB to see a performance of Aida at the movie theater, and I cannot tell you how surprised and happy the students were,” Mayer said. “Probably this is the one important development that will keep this art form alive.”

Mayer will become Gerhilde once again when she performs with the Boston Symphony Orchestra at the Tanglewood Music Festival this summer.

What this role means for her future is uncertain, but she knows her students will benefit from her experience. “How to perform onstage is just not something you can read in a book,” she said. “It’s important that one’s teacher has been taught a strong vocal and artistic tradition through stage experience and passes this on to the student.”

Meanwhile, she’s savoring a peak moment in her career.

“I lived in New York when I was in my 20s, and that’s where I always dreamed to sing,” she said. “For awhile I thought it might not happen.”

Mayer’s career took her everywhere from Seoul to Paris and included an extended stay in Germany, where she and her husband, fellow singer Tim Tobin, moved in 1998.

Wagner is the composer she concentrates on most. In 2005, she performed in a production of Wagner’s first opera, Die Feen, in Würzburg, Germany, with one very special guest in attendance: Wolfgang Wagner, the composer’s grandson.

“[Wagner is] a lot more demanding than other composers,” she said. “It’s a bigger orchestra, and you have to make more sound to cut through it. . . . A lot of the parts are extremely long, and there’s a lot of text to memorize.”

Mayer had only a week to prepare for the unexpected auditions — not much time to compete for the role of her life.

“It was stressful because it was something I wanted really badly, to be honest,” she said. “What American soprano doesn’t dream of singing at the Met? It’s kind of the end-all for us Americans, and it’s a huge honor.”

Madeline Stone is the Spring 2013 intern for this magazine.