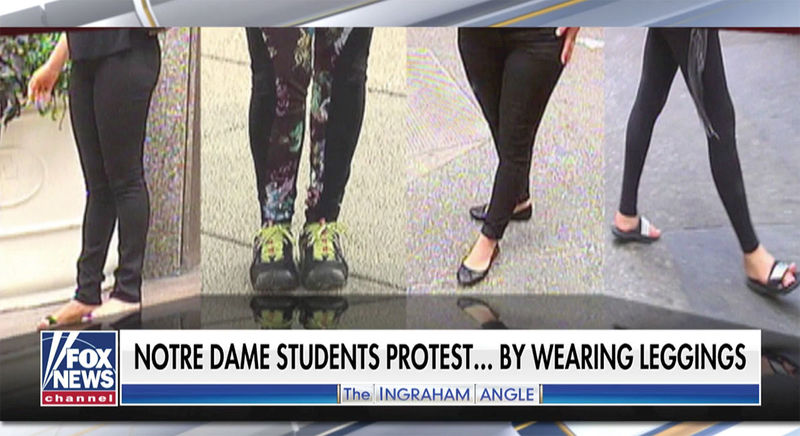 On the morning of March 25, the Notre Dame campus was abuzz. It wasn’t some new administrative policy that prompted the murmuring among students, or the bombshell announcement that the shared Lime bikes that students have come to know, love, and use to book it to class when they’re running late would be gone by year’s end. That particular angst would come a month later.

Rather, the student body lost its collective mind because of a letter to the editor of The Observer, written under the name Maryann White, disapproving of female students wearing form-fitting leggings.

After students combed through White’s musings on “blackly naked rear ends,” “slave-girl (Princess) Leia” and the need for “scarves to tie over the eyes of their sons to protect them,” the search for Maryann White began. Though she had described herself as a “Catholic mother of four sons with a problem only girls can solve” (by wearing more modest attire), she never surfaced to defend her position in any of the news stories that reported the widespread student eye-rolling, and nobody on campus admitted to knowing her. Theories about White’s identity began to make the rounds.

Some believed the author really is a Catholic mother, possibly using a pseudonym to protect her sons. Others chose the more dramatic interpretation that “Maryann White” was an administration mole, sowing the seeds of a pending dress-code implementation. Even more cynical was the rumor that White was an Observer writer penning a ridiculous letter to inflate website clicks.

Whatever the reality, the letter rocketed far beyond campus. Stories appeared in The New York Times and The Washington Post, on the Today show and on BBC Radio 4 — to name but a handful of the interested major news outlets.

Soon impassioned students organized a “leggings day” to protest the notion that women bear responsibility for men’s behavior — although in practice it could be difficult to know whether a person was wearing leggings in defiant response to the letter, or simply as everyday attire.

Nothing has been heard from Maryann White since, but “athleisure” remains a popular wardrobe choice among Notre Dame women.