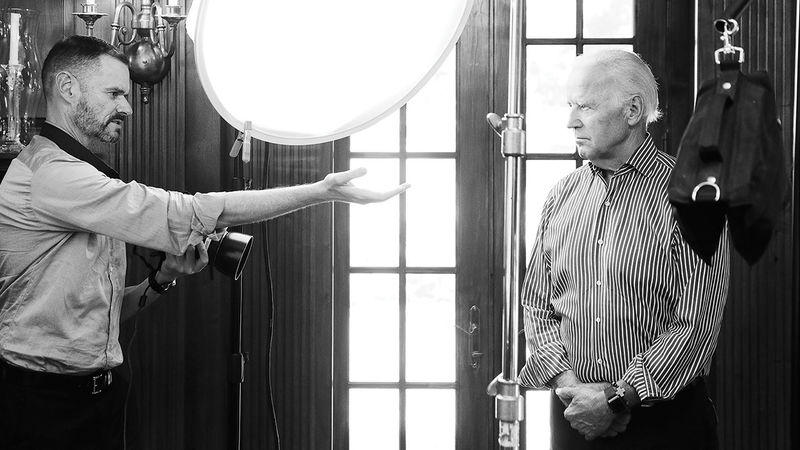 As a backdrop for a portrait of John Irving, the neighborhood around the author’s Toronto office offered precious little to photographer Beowulf Sheehan’s eye.

Sheehan ’90 had scouted locations with his assistant. They noticed a swingset. The idea of a juxtaposition, a giant engaged in child’s play, gave off a faint spark.

The concept hardly set Sheehan’s mind ablaze, but the acclaimed literary photographer is adept at finding the fire within his subjects. It’s the essential light in all his images, many collected in the new book, Author: The Portraits of Beowulf Sheehan, excerpted on the following pages.

“Like all great artists, he has the ability to see into and through his subject,” says Jesmyn Ward, the National Book Award-winning author of Salvage the Bones and Sing, Unburied, Sing.

On the way to the park with Irving, Sheehan saw only the uninspiring periphery, bland rows of houses, barren trees, empty streets. A fallow field in which to capture a portrait of Irving, from whose fertile imagination sprang The World According to Garp, The Cider House Rules and A Prayer for Owen Meany and 11 other novels.

“As we’re walking to the swingset,” Sheehan says, “he asked me if I ever photographed any sports.”

In fact, Sheehan had, years earlier, at the U.S. Olympic training center in Colorado Springs. Among the sports he photographed was wrestling, a favorite of Irving’s. Sheehan recalled the thick necks, the interplay of light and shadow and sweat, the cauliflower ears.

“You know how you get those cauliflower ears, right?” said Irving, who proceeded to throw an arm around the photographer’s waist. Then he clapped the side of Sheehan’s head with his other hand and tugged. That’s how.

“And then you see it, there’s such a presence in him,” Sheehan says. “So much strength, and so much. . . .” He grapples for the right words. “This wink-in-your-eye boy’s excitement at the chance to wrestle.”

The fire within. The essential light.

Now came the even harder part: “How do I speak to that in a picture without him taking my assistant down?”

They found a pile of fallen leaves in a corner of the park. Sheehan’s assistant tossed the leaves around Irving, positioned so a shadow fell across half his face and sunlight illuminated the wrestler’s glint in his eye, as if relishing the prospect of a friendly scrap, “a picture that spoke to a very, very central part of him.”

Sheehan has discovered a central part of himself, too, in the 14 years since he happened into an opportunity to photograph an international literary festival. With a business degree from Notre Dame, he had gone to graduate school at New York University to combine his financial and artistic interests as a gallery owner. An elective turned a flirtation with photography into a more serious relationship, the first step toward a career that would compel Lincoln in the Bardo author George Saunders to call him “a poet, working in light.”

Serene and reassuring behind the camera, Sheehan draws literary luminaries into that light, conjuring inner selves they usually reveal only on the page. He makes a “skittish lot” — as Salman Rushdie calls his comrades-in-words in his introduction to Author — comfortable with visual expression.

“They come out from behind their protective scowls, lions emerging from their private undergrowth, and they begin to show something of their true natures,” Rushdie writes. “And snap! He captures them.”

Jason Kelly (text) is an associate editor of this magazine. Beowulf Sheehan (photos) is a photographer whose work can be found in the new book Author.