“What does it mean, an end?” said the rabbit.
“It means to stop,” said the boy.
“No,” said the horse whose skin was nearly worn away from long life, “it means a purpose to it all.”
-A reader’s imagined conversation from The Velveteen Rabbit.

For two glorious days I had been following my windshield into autumn. I was traveling whatever roads looked like they would take me to a beautiful day beside beautiful lakes in south and central Wisconsin. I had never done this before, gone off to a rural area of America just to wander aimlessly in pursuit of a beautiful day beside beautiful lakes, and it had made me quietly giddy — a giddiness I could feel but nobody else could see. I liked having no exact destination, no clear plan, just a willingness to follow my windshield into autumn, and I thought that was enough to make any sensible person giddy.

At dusk of the second day I was driving eastbound on Route 21. Enclosed in the cabin of the car rolling almost silently into the oncoming night, I felt as if the dusk and I were becoming one, as if, like the dusk, I, too, was becoming a pause in the cycle of time. Woods and meadows drifted by, green and dark and easy. The sun dipped beneath the horizon, and what was around me was lit only by twilight. 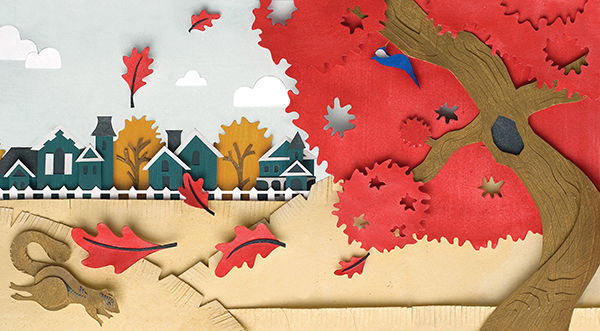 In this calmest of states, I was remembering the day. Without design, that morning I had been passing through the town of Berlin, a town I had never heard of before. Out the side window I could see side streets disappearing one after another uphill into red and gold trees. So why not, I thought, why not disappear up one of those streets, too, just to see what it was like? After all, where was I going anyway? Only toward autumn.

So I went. For what happened next I have no adequate words. I have been to the mountains of Switzerland and Austria, the Lake District of England, the Italian Riviera; I have been among the green hills of Vermont and the white birches of New Hampshire, through the Rockies and the Grand Tetons of the West, down the Grand Canyon of Arizona and along the Big Sur Coast of California. But what I experienced that morning, it seems almost ludicrous to say, equaled anything I had ever experienced in any of these other places.

For hours I walked those side streets of Berlin. Sometimes I just stood and looked, sometimes I took photos, but the entire time I was in awe, haunted by the autumn I was standing in, haunted by the beauty I was not just witnessing but stepping into with each footfall. It is useless to try to give you that day. I have only clichés to offer: red and gold leaves, leaves on trees, leaves so thick upon the ground you could no longer see the sidewalk for whole blocks, Victorian homes sitting so grandly and quietly in that long, almost white slant of autumn sun, ladies-in-waiting from a bygone era, pumpkins and haystacks and scarecrows guarding their lawns. To me, these streets and sidewalks and houses and trees and leaves and pumpkins and haystacks and scarecrows had merged into one thing, and that thing was autumn, throbbingly thick autumn. It went on like this street after street after street. It was all one thing. The whole town had become autumn.

And soon, as I was driving in the dusk down Route 21, I thought I had left autumn behind in Berlin. Then on my left, without warning, I saw three fires in a hollow land beside the road and smoke rising like pillars from the fires. I drove past but could not keep going. I stopped the car, got out, walked down into the hollow land and breathed in the smell of burning leaves, a smell from a long-ago childhood. I had not left autumn behind in Berlin, I had only left daylight’s autumn. Now I was standing in dusk’s autumn.

I stood there as if I had stepped into John T. McCutcheon’s famous sketch, Injun Summer, which had run on the front page of the Chicago Tribune the last Sunday of September every year from 1907 to 1992. It had been gone for decades — but now I was standing in it. A creek divided this hollow land. On the other side a bent-over man was patiently raking leaves into piles to feed the fires. He did it slowly with long strokes of the rake, and I watched him. I watched him slowly and deeply, and breathed in the air slowly and deeply, too.

Then I saw a second man standing near me and by another fire, leaning lightly on the handle of a rake. It was his land, I guessed, and he had come back out from his house to continue his raking. I apologized for coming onto his land. He welcomed me. We talked. He was a minister, the pastor of the local Lutheran church. He had the clear eyes and peaceful face of one who knew he was leading his life as God wanted him to. He belonged there raking leaves at that moment, no place else. We talked for a while, just small talk — I was, after all, interrupting his work. But the whole time we talked I could not stop thinking how clear his eyes were and how at peace he was. He was, like this very autumn, full of God, but in a quiet way, like this autumn dusk was and like the quiet streets of Berlin had been. No majestic mountains or spectacular canyons, just God’s presence and autumn’s presence. When the dusk was all but night, I said goodbye and drove off.

In a few minutes I was following my headlights through the night, and I heard myself thanking God for this day, for this dusk, for this night, for this pastor, for autumn, for God, for an end to all things.

Mel Livatino lives in Evanston, Illinois. His essays have appeared in The Sewanee Review, Writing on the Edge, River Teeth, Under the Sun and other publications. Five of his pieces have been named Notable Essays of the Year in Robert Atwan’s Best American Essays annual (2005, 2010, 2011, 2012, 2013).