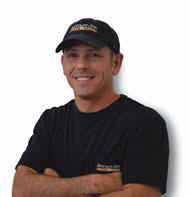 Joe Bellavance ’89 knows how to get people to stop at his trade show booth. He fires up an oven he’s schlepped there from home and bakes his signature artisan bread. “The smell of fresh bread is like moths to the light,” he says.

The bread visitors taste was actually 10 years in the making. As a stay-at-home father of three in Fort Wayne, Indiana, Bellavance enjoyed experimenting with different bread recipes. Until, that is, he discovered he couldn’t make his favorite — a crusty European bread, moist and airy in the middle, crunchy and brown outside.

“The key to a good crust is steam,” he says. He tried all the tricks, from leaving a dish of water in the oven to spritzing the crust at various times during the baking process. “I could never get what I wanted.” 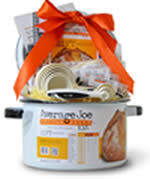 Eventually the self-described “hack baker” found a no-knead recipe online that approached the style and taste he wanted. Two years and countless loaves later, a business was born.

“A friend suggested that I should make an artisan bread kit,” says Bellavance, “and teach others how to make it.”

The 45-year-old serial entrepreneur is no stranger to business projects, previously working on computer software and renewable fuels. He says the bread kit idea, however, filled “my need to have creative input into the product.”

Average Joe Artisan Bread, LLC, officially began business in 2009. “I’ve taken what I’ve done and basically put it in a box,” Bellavance says. “It’s good for lazy guys like me.”

Once the details of the signature crusty bread were refined, baker Bellavance put on his marketing hat. He took samples to the kitchen staff of Joseph Decuis restaurant, distinguished by AAA as a Four-Diamond establishment, in nearby Roanoke, Indiana. They were sold, and now serve his bread.

Bellavance makes it clear that just about anyone can get make a great loaf with his kit. “A lot of people are intimidated by baking,” Bellavance says. “But this is foolproof.”

His 80-year old grandmother and 3-year-old niece make the bread, he says, “and have had no problems.” And those who have purchased the kit frequently send photos of their successful results to the company’s website.

The artisan kit, whose gift edition includes a sturdy bread pot, mixing bowl, kitchen tools, ingredients, cookbook and cheat sheet, makes a variety of breads, from the European style golden standard to a Margherita pizza crust to a cinnamon-raisin crown (enhanced by pecans).

“Bread is one of those things that brings people together,” says Bellavance. “I’m proud of this.”