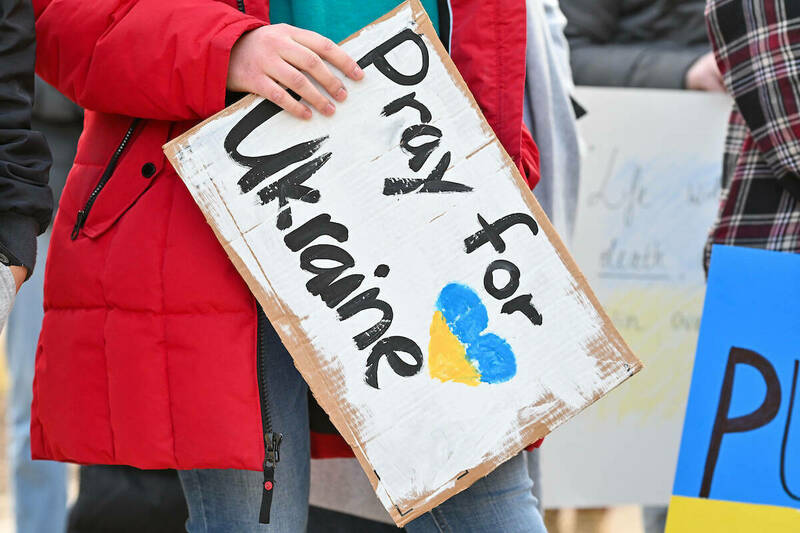 Students gathered outside the Main Building in a show of solidarity with Ukraine. Photography by Matt Cashore ’94

I could not sleep on the night of February 24. Something was amiss. I grabbed my phone and checked the news. Then I knew it. Russia had invaded Ukraine — something we all feared, but did not want to believe would happen. I called my mom right away.

“What a bastard,” she said, bitterness and anger in her voice.

She was referring to Vladimir Putin, the president of Russia, who, hours earlier, announced a “special military operation” into Ukraine. The operation turned out to be a full-scale war, targeting major cities in Ukraine and killing hundreds of civilians to date, with nearly a million refugees fleeing the country. Yet the fight continues.

I am a journalist by training, but I am not going to pretend I am an impartial observer. And who can be when a sovereign country is invaded by a much larger neighbor, a bully with nukes and a giant army that is willing to follow any order — even when that means killing innocent people.

I am grateful to people around the world supporting Ukraine. This is not a question of politics; it is a matter of humanity, of helping fellow humans in need who are being senselessly murdered and whose homes are being destroyed.

As you may know, the Kremlin is trying to shift the war blame onto Ukrainians. They refuse to admit Russian military losses and deny the murders of Ukrainian civilians.

For Americans, it is important to understand that the most recent lies are only the latest words of a propaganda machine launched by the Kremlin against Ukraine during the last decade, and that propaganda has been transmitted in the West thanks to media polarization across many countries.

For instance, in 2014 Russia annexed the southern Ukrainian peninsula of Crimea; in addition, the Kremlin initiated and supported separatism in eastern Ukraine where it created two puppet regimes aimed at destabilizing the rest of the country. Some Western sanctions were imposed as a result, but they were not strong enough to affect the Russian government. The Kremlin quickly adapted and continued with its sadly successful Ukraine-phobic propaganda.

For many years, Western leaders tried to maintain a notion that everything was fine. Russia was still invited to international conferences and the Kremlin remained an important global political voice. Despite other ways to meet its energy needs, Europe’s dependence on Russian gas has blinded the continent to the Kremlin using its natural resource as leverage.

Now even the biggest Putin defenders realize the danger of the Russian regime. Sanctions have been imposed that harm the oligarchs, but bullets still target the Ukrainian people. Russian missiles bomb cities and villages from unprotected skies. NATO and its major members — such as the United States and the Great Britain — refuse to interfere. Ukrainian fighters remain largely on their own defending their country as Russia wages full-scale war with one of the biggest armies in the world.

And the Kremlin is treating its troops as artillery meat. If Russian soldiers get killed, the government will just send new ones. Therefore, a greater intervention is needed. Everyone who supports Ukraine can help to facilitate that — spreading the word about what’s happening, mobilizing communities, contacting congressional representatives, monitoring businesses.

There are still lots of American and European companies operating in Russia. They must leave immediately. The European Union is still buying Russian gas and sending millions in revenue back to Russia because of the region’s energy dependence. This needs to change. The Russian economy — just like its leader — needs to be isolated from the world over this aggression.

Ukraine also needs military help to arm its forces to fight the Russian army. In my home region of Lviv, the number of volunteers far exceeds the arms available. Donations to trusted organizations and advocacy for more support from governments around the world would help strengthen Ukraine.

This war is not only about Ukraine. It is about humanity and values, about the right to be free, to live in peace, to protect your nation and your land. I became a Notre Dame student because its values resonated with me. I, too, believe in the power of a community and in standing up against evil.

I remember the cold winter of 2014 when millions of Ukrainians ousted corrupt president Viktor Yanukovych from power despite government violence against protesters on the streets of the capital, Kyiv. The Ukrainian people have even more resolve now.

They have nothing to lose but their country and their freedom.

Anna Romandash is an international peace studies graduate student in Notre Dame’s Keough School of Global Affairs. A professional journalist from Ukraine, she is scheduled to earn her degree in May. aromanda@nd.edu