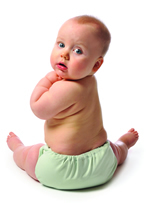 Babies are fantastic listeners. They may not know what you’re saying, but they pay rapt attention to language, and they are constantly looking for patterns to help them make sense of it all, even tracking rudimentary grammar concepts.

“Infants have a problem to solve whenever they hear a word,” explains Jill Lany. “A word could mean anything, so it’s crucial to narrow it down. Babies are always looking for clues from context and sound.”

The Notre Dame assistant professor of psychology, who studies how infants acquire language, says babies appear to learn the rudiments by plucking out bits of information from the ongoing sound stream that they then use to help identify words, track what they’re hearing or predict what they might hear.

For instance, in English nouns tend to occur after such words as “a” and “the.” “So, if a baby hears ‘It’s a,’ there’s a pretty good chance the next thing she hears will be an object label, a noun,” Lany points out. “Babies notice words with similar sounds and notice that these word sound patterns occur in a similar context.”

“There seems to be a scaffolding or bootstrapping process going on which sets the stage for learning more complicated language patterns,” Lany says.