The Notre Dame Summer Band is not your typical concert band. 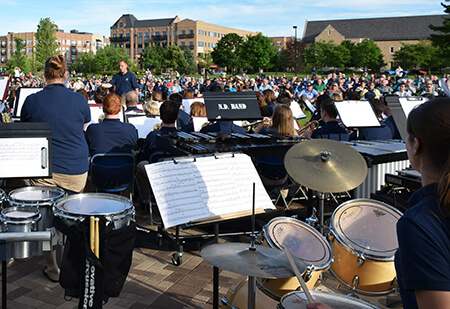 The musicians aren’t all Notre Dame students. They don’t perform in black tie. And they have only three weeks to put together an hour-long concert for the South Bend community.

But their mission is simple: Music should be open to everyone.

It’s a mission they work hard to achieve.

“There are a lot of interesting relationships within the band — parents and kids, students and professors,” notes Matt Merten ’05M.M., an assistant band director at Notre Dame. “All they want to do is come and play music.”

Notre Dame professors, summer session students and band directors, along with local adults and high school students all join ranks — er, rows — to form the summer band in a combination of ages, professions and musical experience that is not often seen.

“The first time I played in the band, I had a student sitting on one side of me and a professor of engineering on the other, who had been band member of the year in 1952,” says Josh Kaplan, a political science professor who has played trombone in the summer band since its inception in 2009. “We’re all different people, but we’re all on the same footing musically.”

This year, the ensemble boasted 110 members. Over half the group had played in the summer band before, says assistant band director Justin McManus, and about 35 of the musicians are high school students from around the South Bend area.

“I recruit my students to come play,” says Alexis Hiner, band director at Edwardsburg High School in Edwardsburg, Michigan. Hiner graduated from Saint Mary’s College in 2012 and joined the summer band as a clarinetist shortly afterward. “I tell them it’s a good way to keep practicing. And for me to play with them is an incredible experience.”

It’s also a chance for the high school students to learn from more experienced musicians. “You get to sit by very talented musicians and have conversations with important people who play the same instrument as you,” Hiner says. “It’s a good sense of what a professional setting would be like.”

Over three weeks, the band learned 11 songs, practicing twice each week for two hours at a time.

McManus and Merten, this year’s summer band directors, kept practices moving along, correcting mistakes with a smile and offering praise when it was merited.

“You can tell that the directors are monitoring everyone as we go,” Kaplan says. “They know where we need to focus and what to let go. And they’re very good at teaching. Every rehearsal, you can hear the band sounding better, more musical.”

And the hard work paid off. The band performed on June 29 on the Irish Green before a big crowd seated on chairs and blankets, many spreading out picnics to better enjoy the show. The repertoire included football-game staples such as “Irish Celebration” and “America the Beautiful” as well pop hits like “Do You Love Me.” The Fourth of July classic “Stars and Stripes Forever” set the audience cheering.

The most surprising moment of the night came when Hiner’s boyfriend proposed in front of the entire audience. Hiner said yes and celebrated with family amidst an encore of the "Victory March.”

But at the end of the show, it was clear that it wasn’t the chance to perform or the applause that had spurred these musicians to devote three weeks of their summer to a band unlike any other.

“There’s something exciting about returning to music,” Kaplan says. “Everyone is here because they want to be here. You get to be a different kind of musician. You get to fall in love with music all over again.”