The German scientist Elizabeth Noelle-Neumann devised an ingenious study to determine whether we really crave the alone time we say we do. She showed participants two different photos of a mountainside — in the first, the landscape was dotted with hikers; in the second, the mountain was uninhabited. Noelle-Newmann then asked the study’s participants two questions: “In which of these two places would you rather spend your holidays?” and “Where would most Germans prefer to spend their holidays?” Sixty percent of participants selected the uninhabited photo for themselves and the crowded mountainside for their fellow Germans.

Cognitive psychologist Mihaly Csikszentmihalyi interprets these findings as another instance in which, “One can learn more about true preferences by listening to what people say others want, rather than to what they claim to want themselves.”

Which is to say: When we assert we want more “me time,” we’re a bunch of big fat liars. Or, as Csikszentmihalyi put more temperately, “Most people overestimate their ability to tolerate solitude.”

Alone, individuals report much lower moods. We feel more bored, more passive, more forsaken. And we’re lonelier in greater numbers than ever before. About one-quarter of us, regardless of race, gender or level of education, are “chronically lonely,” according to University of Chicago social neuroscientist John Cacioppo. An AARP survey of people 45 and older found 35 percent of respondents were lonely, compared with 20 percent just 10 years ago.

And our loneliness is killing us. The Guardian reports that people who suffer “the loneliness disease” are “nearly twice as likely to die prematurely.” The World Health Organization rates loneliness as great a risk as obesity. Doctors and nurses speak of loneliness as an “epidemic.” Yet somehow we’re not aware that others share our loneliness, and our isolation is increased by our shame.

Some theorists blame the increase of loneliness on the disintegration of the traditional family. Fewer people get married and fewer live in extended families. According to a study cited in The Atlantic, in 1950, fewer than 10 percent of households were just one person. In 2010, more than one-quarter of households had one person.

Robert Putnam, author of Bowling Alone, also finds a link between increasing loneliness and decreasing civic engagement. Baby boomers, it seems, are less likely to seek out groups of like-minded individuals. Memberships in fraternal organizations continue to decline. Americans are proud to be independent, but our “individualistic society,” according to the Mental Health Foundation, might be one reason behind the increase in mental health disorders.

Cacioppo suggests our social media “surrogates” are another reason Americans have fewer close confidants than they did two decades ago. For many, Facebook friends supplant face-to-face interactions. This “ersatz intimacy” is critiqued in a provocative article in The Atlantic entitled “Is Facebook Making Us Lonely?”

Yup, it probably is, along with everything else. 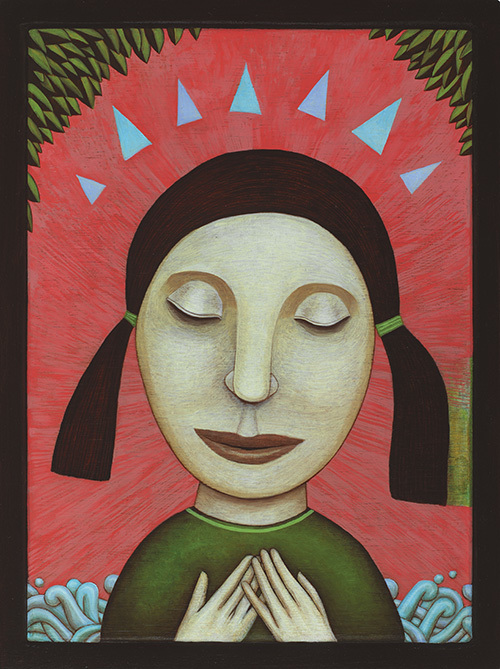 So, what’s the cure? Many would say if being alone makes us unhappy, we should avoid being alone. After all, if we look to the people who report the least amount of loneliness, they typically have reliable social support. People who donate their time to charities, working alongside others for a common cause, report low rates of loneliness. Spiritual people who attend religious services once a month or more report the least amount of loneliness. So is the answer to develop a deeper spirituality? Perhaps join a church and volunteer and, for good measure, maybe join a civic group or a book club?

Yet I think that’s only part of the answer. We all know it’s possible to feel lonely in a group. In fact, that seems the loneliest kind of lonely. Furthermore, it’s not always desirable to be in a group. Csikszentmihalyi notes that while we report feeling less happy when we’re alone, there is one positive — we report higher concentration. Thinkers, artists, scientists — they recognize solitude as necessary for achievement. When we run away from solitude, we’re also running away from the circumstances that might allow us to think, build or create something marvelous.

Maybe, in addition to strengthening our social ties, we need to learn (or relearn) new approaches to aloneness. Maybe we can find ways to make it more productive. Maybe the “cure” for loneliness isn’t to be found in others. Maybe it’s as the poet Marianne Moore says: “The cure for loneliness is solitude.” I think what she means is that while we prefer to be tramping across the crowded mountainside with our BFFs, if we were to find ourselves on the lonely mountain, we might hear our own thoughts better and discover we’re interested in them. Our observations might be sharper. We would be free to choose our own path, our own pace. We might reconnect with our preferences in illuminating ways.

In his 16th century work On Solitude, Michel de Montaigne wrote, “In lonely places, be a crowd unto yourself.” The next time you fear you’re falling into a bad crowd, you might give one or more of these 10 strategies a try.

Feed yourself. Many of us would think nothing of spending hours preparing a feast for others, but we wouldn’t do much more than tear off the perforated tab on a microwaveable dinner if eating alone. But perhaps the table for one should be the most dignified. With fewer distractions, one appreciates not only the food but the ambiance, the flowers, the place setting. The rituals that dignify our everyday needs. Light a candle; pour yourself a glass of wine. Do not face a screen of any sort. Eat with intention, noting not only tastes but textures, colors, sounds.

Meditate. Researchers have found that people who were trained in and then practiced individual mindfulness meditation experienced a decrease in loneliness. Steve Cole of UCLA’s School of Medicine, which conducted the study, warns that a single session won’t reap results: “You need to have a daily practice of 15 to 20 minutes, minimum, to see these benefits.” Meditation is slow medicine, but it’s powerful medicine.

Admire art; listen to music. In a world of carefully curated selfies and status updates that portray stoopidly happy people living stoopidly happy lives, art that reveals and deepens the complexity of the human experience is immensely affirming. The philosopher Alain de Botton, in the short film What is Art For? suggests, “One thing art can do is reassure us of the normality of pain. It can be sad with and for us.” When listening to music, if possible make it your foreground, not your background. Listen without multitasking — without even driving. We are rhythmical creatures, shaped by the patterns of our eating and breathing and sleeping and making love. Listening to music — really listening — puts us in harmony with the always rhythmic natural world. Robert Browning said, “Who hears music, feels his solitude/ Peopled at once.”

Get outside. Go find your lonely mountain. There’s something especially soulful about green spaces free of humans and signs of humans. But, really, any fresh air can cleanse us. Thoreau wrote, “There can be no very black melancholy to him who lives in the midst of nature and has senses still.” And here’s Byron:
There is a pleasure in the pathless woods,
There is a rapture on the lonely shore,
There is society where none intrudes,
By the deep Sea, and music in its roar:
I love not Man the less, but Nature more.

Pet an animal. Researcher Allen R. McConnell finds that people with pets are generally less lonely. Even if you can’t own a pet, a visit to the pound or pet store provides the joys of currying your fingers through an animal’s warm coat. Failing that, a trip to the zoo or even a lunch break in a park with a pair of binoculars can remind us of the delights of nature, and the connection of the human and the natural worlds, which we ignore at our peril.

Read. What intimate friends I’ve met in books. What pleasant repose I’ve found there. How heartening to know that these books have no closing times, no holidays — they are there, waiting, ready to converse, to enlighten, to provoke and comfort. Rebecca Solnit writes, “A book is a heart that only beats in the chest of another.” In addition to making us less lonely in the moment, reading strengthens skills that might make us less lonely in the future. Readers score higher on tests of empathy. Reading improves our emotional intelligence.

Sweat. Countless studies show that exercise improves mood. The release of endocannabinoids — what we call runner’s high — results in neurobiological pleasure. And sweating plays well with other strategies on this list — sweat while listening to music, while walking a dog, while being outside. Sweat enough and you can do more of the “feed yourself” strategy, pleasure compounding pleasure (go ahead, eat the crème brulee).

Write a letter. In her study of Facebook users, Moira Burke found that “nonpersonalized” communication — scanning friends’ posts or updating your status — increases feelings of disconnectedness. Social capital can only be increased by writing directly to one another. If we can feel less lonely after writing directly on another’s “wall,” it follows that the handwritten letter, which passes through the wall and into the home and heart, might magnify this increase. Select your stationery, sit down in a favorite spot, let your fingers find that slower rhythm, and see if slower, better thoughts follow. Stephen Marche says, “Facebook imprisons us in the business of self-presenting.” The privacy of letter-writing frees us to be vulnerable. We are more like the “Noiseless, Patient Spider” of Whitman’s poem, who “to explore the vacant vast surrounding/. . . .launch’d forth filament, filament, filament.” Whitman finds in this a metaphor for his “surrounded, detached” self, seeking connections, which waits “Till the gossamer thread you fling, catch somewhere, O my Soul.” So fling out the filament of a letter. If you receive a reply, that’s a balm, a boon against lonely days. But it begins with the outward flinging.

Travel solo. What happens when you are dying to see the show of Rembrandt’s late works at the National Gallery, but none of your friends fancy London? Or when your bucket list contains hiking the ATM cave in Belize, but your honey is a couch potato? Take yourself there. Overcome your fears. Free from judgment, free from routines, free to indulge curiosity, we are open to delight, and delight in being open. When traveling solo, one interacts more with strangers, sometimes for the simple reason that one needs more help. These interactions decrease feelings of isolation. And the confidence we bring home becomes our best souvenir.

Say thanks. If you feed yourself well, and the meal leads you to reflect on the sun that tugged the seeds open, or the farmers who grew the food, or the grandmother who gave you her china, acknowledge your debt. If you meditate, be grateful for the body that (despite its aches, despite its flaws) brought you a few exhalations closer to calm. If you see art or listen to music, thank the artists, support the arts. If you get outside, thank the green, thank the fur and feathers, thank the trees that gave up their ghosts to be reincarnated as the pages of your favorite books, thank the salt in your sweat, thank the job that allows you to earn the money to be a stranger in a strange land, thank the stranger who points to the right train or bends over your map to help you find your way. The University of California, Berkeley, Expanding the Science and Practice of Gratitude Project shows that people who practice gratitude consistently feel less lonely. And that is an outcome we can all be grateful for.

Beth Ann Fennelly ’93 is an associate professor of English and director of the MFA program at the University of Mississippi.