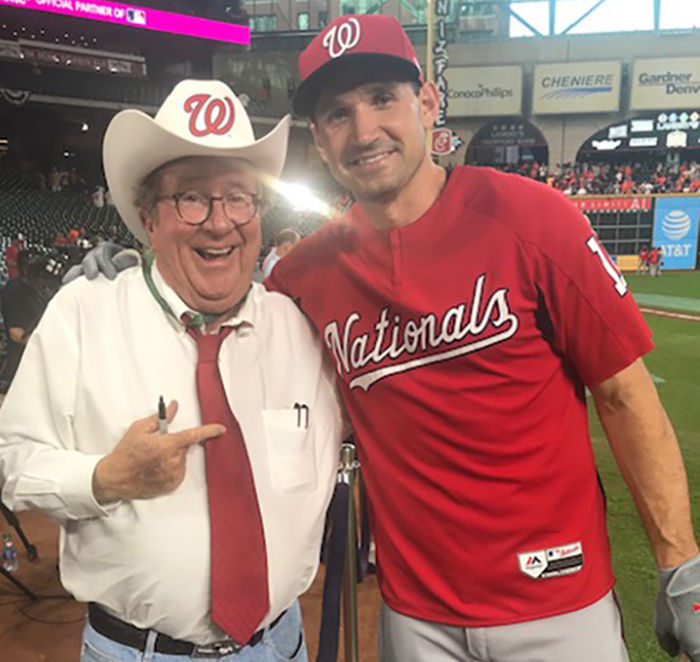 You might not know it from watching the cable news channels, but there is more to Washington, D.C. than politics.

Beyond the well-known public buildings and monuments lies a real city, a big city of more than 600,000 souls, with 10 times that many in the metro area. There are saints and sinners, strivers and slackers, everyday people.

Collins is a local news reporter for NBC4 Washington and one of the most original storytellers ever to work in television news. His reports fit no formula; they are some mix of street savvy, imagination and solid journalistic chops.

“No one does local news beat poetry quite like NBC4 Washington’s Pat Collins,” opined late-night HBO comedian John Oliver in 2018 as he introduced a medley of Pat’s reports.

Collins’s unique style has made him one of the most recognized and respected reporters in Washington, winner of 10 Emmys and many other awards. He was even Grand Marshal of the District’s 2017 St Patrick’s Day Parade. But before all of that, in what is still among his proudest accomplishments, he was the co-founder of The Observer, Notre Dame’s student newspaper.

Collins grew up in Washington and while in high school landed a job covering scholastic sports for The Washington Daily News, a scrappy tabloid. Newsrooms then were bathed in cigarette smoke, noisy with the clack and bang of typewriters and teletypes and full of smart and often colorful characters beating deadlines to report the day’s news. Young Pat was hooked.

“You never wanted to leave,” he says. “You might miss something.”

He didn’t have the same feeling for The Voice, the student newspaper when he arrived at Notre Dame in the fall of 1964, which he viewed as akin to a church bulletin. “It just wasn’t very good,” he says. As a freshman Pat put out a parody of the The Voice called The Whisper.

Then he got serious. The next year he met the precocious Robert Sam Anson ’67, who would soon become a Time magazine foreign correspondent. Anson agreed with Collins that the campus should have a better newspaper.

They joined The Voice, managed to shut it down, and then restarted it as The Observer, basing the original nameplate on The National Observer. They began publishing twice a week. As editor in 1967-68, Collins moved it to thrice a week, on its way to becoming a daily.

He recruited students (this writer included) who wrote stories and columns, sold ads, did “pre-press” work — layout and paste-up — and drove it to the Niles, Michigan plant where it was printed. Though on a shoestring budget, Collins paid (tiny) salaries and managed to staff some major national stories, including the 1967 march on the Pentagon.

“I wanted students to experience every aspect of putting a newspaper together,” he says, “as I had at the Daily News.”

The Observer was read, discussed, debated. The word “screw” once appeared, bringing a scathing letter from an alumnus decrying “smut on Our Lady’s face.” Collins pushed it too far, however, when he compromised Our Lady’s pocketbook. He published a “football special,” which contained names and numbers of the players, with some staff-written feature stories. He sold it for less than the official game program, which caused the administration to “move us off campus — way off campus,” he recalls.

The Vietnam War was still raging when Pat graduated in 1968, and he was in the Army ROTC. He served in Vietnam for a year with the 11th Armored Cavalry Regiment. Among his duties: running an aid station during the controversial 1970 incursion into Cambodia, where the unit suffered many casualties.

When he was discharged in 1971, Pat told friends he no intention of marrying right away. He stuck steadfastly to this pledge for about a month, reassessing it after a blind date with a lovely young woman from Philadelphia named Emily Bender. They married that September and now have three children and five grandchildren.

Pat went to work for the Star, for a time called the Star-News, and was assigned to the biggest story in a generation, Watergate. He and his partner Joe Volz broke some major stories in the scandal that brought down President Richard Nixon. But they’d gotten a late start and didn’t have the sources that Bob Woodward and Carl Bernstein of The Washington Post did. Volz later wrote a magazine piece about their work titled “None of The President’s Men.”

Collins had seen one newspaper collapse and was unnerved by some of the management decisions at The Star (it would fold in 1981). Meanwhile, something was happening in television: stations were beginning to realize they could make piles of money on local news, and were looking for competent reporters. A friend got Pat an audition at WTOP Channel 9, and he was hired.

He’d learned how to write bright and tight, as some editors say, at the Daily News, but doing a story on camera was a challenge. He said for the first six months he was “terrible.” But under the tutelage of legendary news director Jim Snyder, who brought Andrea Mitchell, Warner Wolf and other luminaries into television, Collins got better. He began to see the potential of a visual medium. He could tell a story by using props, moving around or even wearing costumes, if the subject matter so lent itself.

After stints at WTOP, WLS in Chicago and WJLA Channel 7 in Washington, he moved to WNBC4 in 1986 has been there since. His station focuses on local news — but in Washington, local news often is national news. Collins worked on government shutdowns, the 9/11 attack on the Pentagon, the D.C. sniper, Navy Yard shootings and countless other stories, some less morbid.

A Collins classic that went viral on YouTube involved a 14-year-old high schooler who was suspended from school in Virginia for running around a football field at halftime of a game in a banana costume. Collins wore a full-body grape costume as he conducted a serious, low-key interview with the banana. The lad was quickly reinstated.

Weather can be big news. Snow does what no enemy has done since the War of 1812: it brings Washington to a halt. When a storm hits, countless viewers turn to NBC4 to watch Collins, armed with his signature Pat Collins Snow Stick, a thick blue yardstick, out measuring the snowfall.

At 73, Collins has cut back to three days a week. He is writing a memoir. But he still loves putting a story together, and the station loves the way he attracts viewers with a depth of information and compelling storytelling that stands out from the competition.

As longtime colleague Sharon Donnel puts it, “Pat is a national treasure.”

Tom Condon, a retired columnist and chief editorial writer for The Hartford Courant, now writes for The Connecticut Mirror. Find his stories at ctmirror.org.