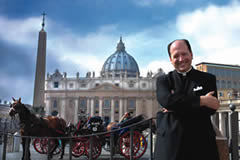 As I walked down a hallway on my third day of work as a new official in the Roman Curia of the Catholic Church, the sound of a large crowd outside the office broke my concentration. I expected an anti-Catholic protest might be taking place in the streets. Rounding a corner past the office chapel, I ducked into the Sala di Congressi, a large conference room with windows opening onto the Piazza of Saint Peter, the large square in front of the Basilica of Saint Peter. That was probably the first time it hit me.

Most of the offices of the Roman Curia are located in the State of the Vatican City, a 109-acre microstate within the city of Rome on the Vatican Hill. The Roman Curia is the central government of the Vatican, supporting the pope, or bishop of Rome. Like bishops throughout the world, the Holy Father delegates his authority to various officials and departments that function in his name and make decisions with his authority.

I serve as an official of the Congregation for the Clergy, a body founded in 1564 “to ensure the correct interpretation and practical observance of the norms issued by the Council of Trent.” As with other departments of the Roman Curia, it has been re-organized and renamed several times. Its current responsibilities involve supporting diocesan priests, coordinating catechetical documents and reviewing decisions regarding the disposition of the patrimony of the Church. These past several years working in the Roman Curia represent my second “hitch” in Rome. I first gained an appreciation for this small part of Rome as a seminarian in the mid-1990s. During those years I guided pilgrims through the Scavi—the excavations located under the Basilica of Saint Peter. Carried out in the 1940s and 1950s, the excavations uncovered a large cemetery upon which the gigantic basilica had been built.

In some ways the Basilica of Saint Peter can be compared to a large Russian matryoshka doll, with Michelangelo’s imposing Dome of Saint Peter’s being the largest doll and a 1st century grave being the smallest. Entering into the excavations is like drilling through the matryoshka. As one gets closer to the center, one goes through a series of older and smaller structures. The current altar of Clement VIII sits over the altar of Pope Callistus II, which surrounds the altar of Pope Gregory the Great. The Gregorian altar is built on top of a marble mausoleum from the time of Pope Sylvester, which encloses a small monument dating from the time of Pope Pius I. That small monument was built to mark the grave of a poor fisherman from Galilee named Simon bar-Jonah, the first bishop of Rome, better known as Peter, the name given to him by Jesus Christ.

That’s why the Roman Curia is located on the Vatican Hill. Because Peter is here.

What beckoned me to the window during my first week of work wasn’t the shouts of protesters but cheers of joy. A large group of pilgrims was welcoming Pope John Paul II as he arrived in the piazza for his regular Wednesday audience. As I looked out the window of the Sala di Congressi that morning, I was startled into the realization that serving in the Roman Curia meant serving the Holy Father, the successor of Saint Peter. My ministry was to be a small collaborator in the ministry Jesus Christ gave Saint Peter, still enduring after nearly 2,000 years.

I was once told that working in the Vatican would cause me to “gain my religion and lose my faith"—in other words, the human elements of the organization of the Catholic Church would make me lose my faith in its divine origins. Nothing could be further from the truth. Having worked in the business world before entering the seminary, I harbored no illusions about “perfect” corporate structures. Human beings aren’t perfect; they make mistakes. And the human beings who work in the Vatican also make mistakes.

After four years here, however, my faith has grown stronger, not weaker. From the first week until the present week, I have understood the same thing. My faith in the Catholic Church isn’t a faith in a 2,000-year-old association of individuals. I have faith in the Church because it was founded by Jesus Christ upon the Apostle, Peter. My faith is strong. Our faith is strong. It’s founded upon a Rock.

Photo of Father Nalty at the Vatican by Stefano Spaziani.