Let me tell you a story. There is a local judge who is supposed to decide a complicated insurance case. The plaintiff, a destitute widow, sends him two or three letters a day, makes innumerable phone calls, leaves endless voice mails, e-mails him every hour, sends dozens of faxes, texts him, begins a Facebook page, and has her friends calling in daily to recommend her cause and demand justice for her. Whenever the judge tries to leave his home or the courthouse, she accosts him. She plants people in his path who give him messages about her. Sir, please help this poor woman. Listen to her case.

Finally after several weeks the judge cannot stand the constant nagging any more. Without considering the merits of the case, he decides to give her all that she wants. 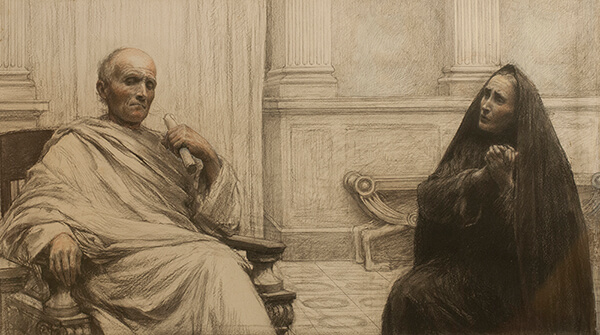 Does this story sound familiar to you? It should, because it’s basically the story from St. Luke’s Gospel known as the Parable of the Unjust Judge and the Widow.

Here’s the parable: “There was a judge in a certain town who neither feared God nor respected any human being. And a widow in that town used to come to him and say, ‘Render a just decision for me against my adversary.’ For a long time the judge was unwilling, but eventually he thought, ‘While it is true that I neither fear God nor respect any human being, because this widow keeps bothering me I shall deliver a just decision for her lest she finally come and strike me.’”

Once more, Jesus leaves his listeners scratching their heads. What is this all about?

The parables are mirrors in which we are invited to look at ourselves by identifying with someone. So, who are we in this parable? We don’t know anything about the widow. She is not presented as virtuous or even as having a just cause. The judge is obviously not impartial. He’s supposed to be a decent person who does justice to people, but he’s a wretched man. So how can the Kingdom of God be similar to anything in this rather bizarre situation?

I have heard too many homilies where God is somehow compared to the unjust judge and you, the person praying, are the widow. Maybe it’s never quite said so explicitly. But the widow is always the one praying.

That means the unjust judge must be God. What an insult to God to think of God as the unjust judge! Dios mío! As Voltaire once wrote, “If God has made man in his image, we have returned him the favor.”

The Trappist Father Thomas Keating suggests instead that we are the unjust judge and the widow represents the Kingdom of God — grace that is constantly banging on our door, morning, noon, and night pleading, “Do me justice.” Or, more specifically, “How about spending some time in prayer? How about forgiving your enemy? How about seeking reconciliation with your brother-in-law? How about helping someone in need?”

Or again, “Accept the dark side of your personality. Take note of the feelings that hinder your relationships and your efforts to forgive and not to judge. Where are these feelings coming from? Why do you keep excluding those people from your life?”

These are the things that the divine widow — the Kingdom of God — has in mind when she pleads, “Do me justice!” In other words, “Be compassionate as your heavenly Father is compassionate.”

If you think that modern forms of communication can be overwhelming, wait until you see how many ways of communicating God can come up with. God approaches us all day long, coming to meet us morning, noon and night, through people, events, our thoughts, feelings, memories, reactions, our failings, and even our sins. God is more “annoying” and insistent than all the bings and swooshes and sounds you hear on your phone every time you get an e-mail or a text or a message. In fact, God approaches us so much that all the bings and swooshes are like one non-stop sound!

We accept the Kingdom finally, not because we are just or even less so because we deserve it, but because at some point, like the unjust judge, we cannot stand God’s grace nagging and persisting at us anymore. Like the unjust judge we just can’t take it anymore and we give up. We are forced to give in saying, “Okay, God, take my life. I am in your hands.”

This is the point of the parable. The mercy of God is constantly knocking on the door of our hearts, “24/7” as they say. Eventually we give in to God. God’s mercy will eventually win out and take us over. It’s just a matter of time. God won’t stop until his mercy saves every one of us. We can’t lose! God always wins.

Father Joe Corpora, CSC, is the director of the Catholic School Advantage campaign within Notre Dame’s Alliance for Catholic Education (ACE) program and associate director, pastoral care of students, in the Office of Campus Ministry. He is one of 700 priests whom Pope Francis appointed in February 2016 to serve as Missionaries of Mercy.