Second in a series.

Ever since my appointment as a Missionary of Mercy in February, I have received several hundred emails and notes and phone calls congratulating me, promising prayers and asking questions. Some came from students I taught at Notre Dame as a seminarian 30-plus years ago and have not heard from since. It has been very humbling and touching.

Most people don’t know quite what to say. The most common sentiment is: “Congratulations on your promotion.” While people mean well, I do not see this as a promotion. And I’m certain that was not in the mind of the Holy Father when he appointed us. 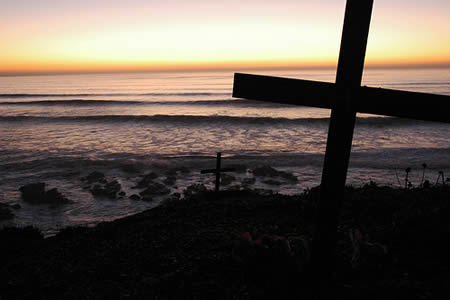 I tell people that all it takes to be a Missionary of Mercy is to be a big sinner. In the seventh chapter of St. Luke’s Gospel, Jesus goes to the home of Simon the Pharisee for dinner. While he’s there, a woman stops by and washes Jesus’ feet with her tears and dries them with her hair. Simon makes a few comments under his breath. Jesus says, “She has loved much because her many sins have been forgiven.” He seems to explain that there is a direct correlation between the depth of our sin and the depth of our ability to love.

So, to be a Missionary of Mercy, one needs to be aware of the depth of one’s sin, to know of one’s incapacity to make much progress in overcoming it, to rely incessantly on the mercy of God, and then extend that mercy to others. That’s the pattern. Instead, people imagine it means you have overcome sin. Quite the opposite.

When students ask if I am willing to serve as their spiritual director, I always say, “Here’s what I bring to this conversation. I’ve been sinning a lot longer than you have. So most likely I know more about mercy and forgiveness than you do, too.”

Since I returned from Rome last month, I have given several retreats and days of recollection to priests.

The next evening I went to Holy Cross House. Father was wearing an oxygen mask. It was difficult for him to talk and hard for me to understand him. At one point he said, “Be kind to me, Joe.”

Preaching to priests is in a category of its own. I preached a Lenten retreat at Holy Cross House to about 70 retired and ill priests and brothers in the Congregation of Holy Cross. Just standing in front of some of the giants of our community is intimidating. Some of these men have been my superiors. Some taught me. Almost all know me. As I talk about the parables of mercy I look out and wonder which one of those guys I will be in 15 to 20 years — or sooner? Life is so fragile. Will I be like Father X who has Parkinson’s? Will I be like Father Y who can’t stay awake? (I’m kind of like that now!) Will I be like Father Z who cannot accept that the aging process is winning?

Years ago, my novice master, Fr. Nick Ayo, CSC ’56 said that every priest has a beautiful soul. I didn’t believe him. And I had a list of names to prove it!

After this retreat and after hearing these confessions, I believe him. Every priest has a beautiful soul.

I’ve traveled to preach days of recollection to priests in several dioceses, too. Again, this is a unique privilege. So much grace, so much grace.

One Wednesday evening I flew home from Newark, New Jersey. Driving back to campus, I was sitting in the drive-thru at Popeye’s when my phone rang. It was Brother Dennis, the superior of Holy Cross House. He told me that one of our brother priests did not have much time to live and had asked if I would come and hear his confession. I wondered why Father, with whom I had only spoken a handful of times, wanted to see me. “Because you’re a Missionary of Mercy,” Brother Dennis said.

The next evening I went to Holy Cross House. Father was wearing an oxygen mask. It was difficult for him to talk and hard for me to understand him. At one point he said, “Be kind to me, Joe.” And I said, “I will be — and God will be infinitely more kind.”

After some time it became clear that no words were necessary. He kept looking at me. His eyes did not look frightened . . . but perhaps a little scared. I couldn’t take my eyes off his face. And I thought, this is how God is with us. He can’t take his eyes off us.

At one point Father took off his mask and within seconds he began to flail and scream. I went into the hallway and yelled “Help! Help, please!” Two nurses came and put his mask back on.

During our visit he kept grabbing my right hand with his left hand and would rub it on his chest, pushing it in as though he were trying to get something from inside of me to go inside of him. With his right hand he kept touching my face. I was not sure what he was doing.

I sat with him until 8:00 and then told him that I had to go. He asked me if I would come back the next day and I told him that I would. As I walked to my car, I thought, “This is the culture of encounter that Pope Francis talks about. Two people really trying to be present to each other.”

I returned to Dillon Hall and after our Thursday night Milkshake Mass, I looked at email and read that Father had died at 9:30. I learned later that he died peacefully, calmly, quietly.

I thought all night about why he kept rubbing my hand around his chest. After sharing the story with our provincial the next morning, it became clear to me that Father desperately wanted to accept God’s mercy. And the rubbing and pushing was a sign of wanting God’s mercy to seep into his heart and soul.

I recalled being a concelebrant at the Mass of Canonization for St. Junipero Serra in Washington, D.C., last September. During his homily, Pope Francis talked about the mercy of God getting into us, and I remember clearly that he moved his forearm in a circular fashion. That’s what Father was doing.

When God uses me in ways like this, I think there must have been crossed wires in heaven. How could God use an inveterate sinner like me to help bring mercy to others? But then again, sinners know a lot about mercy. As Thomas Merton wrote, “Mercy within mercy within mercy.” God is always at work, always at work.

Father Joe Corpora, CSC, is the director of the Catholic School Advantage Campaign within Notre Dame’s Alliance for Catholic Education (ACE) program. He was one of 700 priests whom Pope Francis appointed to serve as Missionaries of Mercy in February 2016.