After I left the Holy Land, my next stop was Rome. I had learned Pope Francis was planning to direct a retreat for priests and seminarians June 1-3, which lined up with my travel plans. Approximately 6000 priests from around the world signed up for this Jubilee for Priests.

After I registered, I received an e-mail asking me if I would be willing to be a confessor on June 1. The Holy Father was asking any Missionary of Mercy who would be in Rome on June 1 to serve as a confessor in one of the jubilee churches. I agreed to do so, of course.

I was assigned to a church known to Italians and tourists alike as Chiesa Nuova, or “new church,” which is located on Corso Vittorio Emmanuelle in the Campo de’ Fiori neighborhood of Rome. The real name for Chiesa Nuova is Santa Maria in Valicella. I don’t think anyone — including the Pastor — knows it by this name! It is the church where St. Philip Neri is buried. The church is a five minute walk from Piazza Navona. Like dozens of other churches in Europe, it is amazingly beautiful. 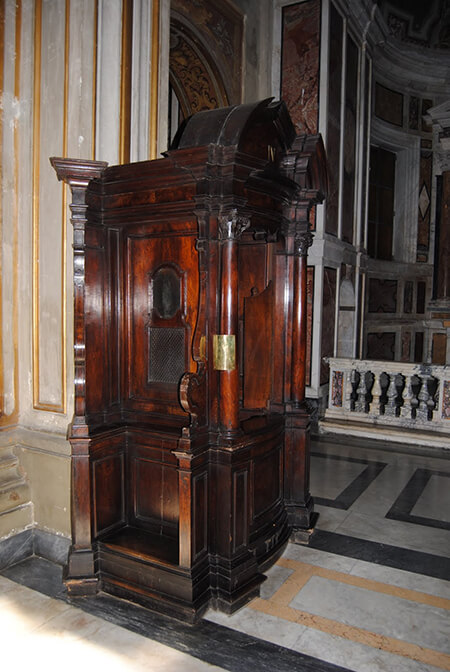 I went to the church half an hour early to pray. And then I heard the confessions of priests from 2:00 to 4:30 p.m. The jubilee volunteers put a sign on my confessional that read “ENGLISH / ESPAÑOL.” The most difficult part of the afternoon was figuring out how to get inside the confessional. Confessionals in Italy are constructed differently than in the United States. The “box” is a sort of freestanding structure. I couldn’t figure out how to open the little door so I could get inside and sit on the bench. I couldn’t find the latch or the hook. I thought I was going to have to jump in to the box.

Finally I found the latch and opened the door and sat down. There are all sorts of wooden flaps — five to be exact. So I spent the first 10 minutes trying to figure it all out — and laughing at myself.

The sins of priests are the same the world over. We take advantage of our position as priests and sometimes feel entitled. We gossip about parishioners to other parishioners. We are vain. We tell white lies to make ourselves look better. We worry about crossing boundaries with staff or parishioners. We try to live a celibate life, which is not easy.

I could tell from listening to the priests going to confession, one after the next, that they so desperately want to believe what they tell penitents about God’s mercy and forgiveness, that God forgives all, that God constantly shows us his mercy, that God is filled with compassion and love for us.

As I thought about it, I realized that priests do believe what they tell penitents about the mercy and forgiveness of God. It’s just that we also need to hear someone say it to us.

Here’s an analogy: You can’t tickle yourself. Someone else has to do it. Similarly, it’s easier to believe God has forgiven my sins, that God loves me unconditionally, that God pours out his mercy upon me when someone else tells me than when I tell myself.

I am so grateful I could be the person telling priest after priest that God forgives, that God is merciful, that with God there is mercy and fullness of redemption, that their sins are forgiven.

The first conference the Holy Father gave the next day, Thursday, was entitled, “From estrangement to celebration.” In his opening remarks he said, “In our serene prayer, which wavers between embarrassment and dignity, dignity and embarrassment, let us ask for the grace to sense that mercy as giving meaning to our entire life, the grace to feel how the heart of the Father beats as one with our own.”

Pope Francis continued, “We are at one and the same time sinners pardoned and sinners restored to dignity. That’s kind of what I mean when I say, “I am a sinner whose sins are forgiven.”

“This is how we have to see ourselves,” the Holy Father told us: “Poised between our utter shame and our sublime dignity. Dirty, impure, mean and selfish, yet at the same time, with feet washed, called and chosen to distribute the Lord’s multiplied loaves, blessed by our people, loved and cared for. Only mercy makes this situation bearable. Without it, either we believe in our own righteousness like the Pharisees, or we shrink back like those who feel unworthy. In either case, our hearts grow hardened.”

Even though we have to live in the tension of sinners pardoned and sinners restored to dignity, between our utter shame and sublime dignity, we come to know that it is mercy, only God’s mercy, that makes it all possible.