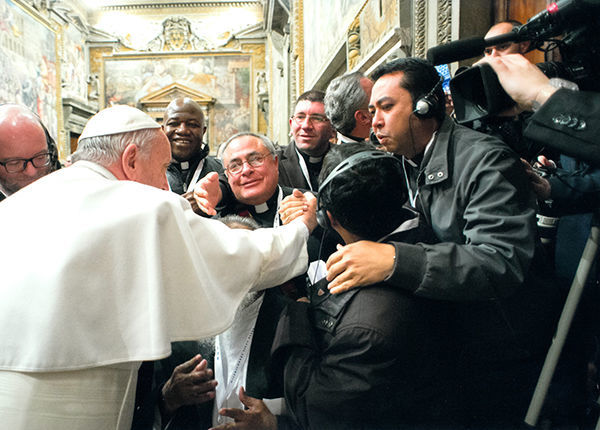 During Holy Week I heard confessions for about 15 hours. I tried to remember the advice of the Holy Father when he spoke to us as Missionaries of Mercy in February. “When people come to confession, smile at them. If you can’t smile, go do other work.” I smile a lot.

Pope Francis offered us models for our work as confessors. As I mentioned in a previous post, the relics of St. Padre Pio of Pietrelcina and St. Leopold Mandic were brought to the Vatican to be present at Mass on Ash Wednesday, when the Holy Father commissioned us as missionaries. Both saints were known to be wise and holy confessors spending many hours a day hearing confessions.

I have another example from my days as pastor of St. John Vianney parish in Goodyear, Arizona. St. John was himself famous for hearing confessions for ten to 12 hours a day. I cannot count how many penance services I took part in during my 19 years as a pastor — 12 at St. John Vianney and another seven at Holy Redeemer in Portland, Oregon.

Confessions are a unique opportunity to extend the mercy of God, often to people who think they are unworthy of it. “God is greater than any sin we could ever commit,” I say over and over. “Our sins just melt away in the face of God’s inexhaustible mercy.”

Confessions in parishes always attract God’s salt of the earth people wanting forgiveness: I have been judgmental. I fight with my spouse. I gossip at work. I’m impatient with my children. I don’t like my mother-in-law. I tell white lies. Good, honest people wanting to do better. I love parish penance services because, for the most part, there is no pretense, just straightforward confessing of sins.

When I was a novice, our novice master, Father Nick Ayo, CSC, ’56, ’62M.A. often said, “If everyone set their life story to music, you would recognize the melody everywhere.” So true, so true. In the end our sins are very similar.

The confessions of children are especially beautiful. Years ago a kid came to confession, sat down in front of me, and said, “Number three, number eight, and especially number four.” I really didn’t know what he meant. When I asked him, he replied, “Oh, the commandments that I have broken.” Another time, a girl, about 12 years old, said, “I find my little brother to be insufferable.” There are many times while hearing the confessions of children that I have to hold back my laughter. They are so beautiful, so innocent, so funny.

Recently a middle-school student came to confession. He said, “I don’t always say thank you. And I often do things and find other people to blame.” I realized at that moment that I was sitting in front of a theologian or a mystic or a saint. I wanted to ask him, “Did you do a doctorate in sacramental theology at Notre Dame?”

“I often do things and find other people to blame.” I can only repeat myself. Imagine what a different world we would live in we were not always looking to blame someone else? If we were willing to own up to what we have done? It is really so freeing when I can say, “It was my fault. I did it.”

I leave the confessional, stole in hand, so grateful to a merciful God who has shown me a lifetime of mercy and who has called me to serve him and his Church as a priest. What a privilege, what a grace, what a blessing to be able to extend that mercy to all who come seeking the mercy of a God whose name is mercy.

Father Joe Corpora, CSC, is the director of the Catholic School Advantage campaign within Notre Dame’s Alliance for Catholic Education (ACE) program. He is one of 700 priests whom Pope Francis appointed to serve as Missionaries of Mercy in February 2016.