About a month before Christmas break, I decided that I would make a mini-retreat of four days at a monastery where I have made retreats many times over the years. It is a place that I especially love. And I love the community of sisters at the monastery. Like most Trappist and Trappistine monasteries, it’s in the middle of nowhere. Actually you can get to nowhere faster and easier than you can get to this wonderful and beautiful monastery. 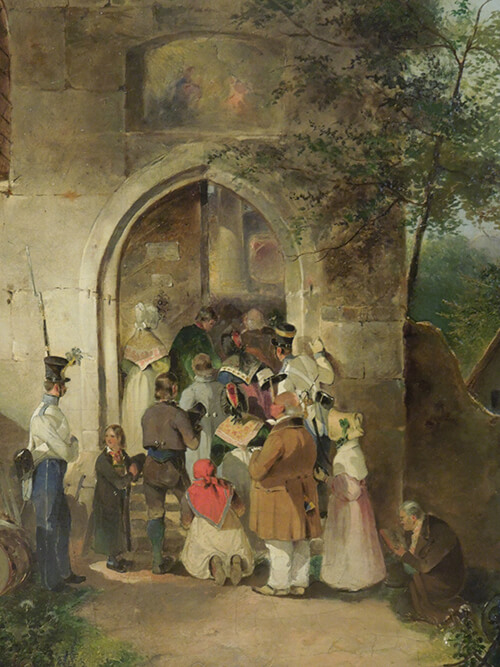 I would be there over New Year’s weekend. There is a parish about 16 miles from the monastery and a mission of that parish about five miles from the monastery. I recalled my 19 years as a pastor and how tired I was after Advent and Christmas. So I decided to call the pastor of the parish and ask if he wanted any help over the weekend. He asked me if I would take all the Masses — two at the parish church and one at the mission — and I agreed.

Both churches have very small, tight-knit communities. Everyone knows everyone. As soon as I walked in, everyone knew I was a visitor. They were warm and welcoming, and wondering who this guy was. (I was not wearing black clerical clothing.)

Both communities are very rural. Maybe 125 people attended all three Masses. One thing I noticed after a few moments is how the laity have kept these communities together over many years. Pastors and administrators have come and gone. And I wouldn’t be surprised if, at times, there was no pastor. At the parish, the woman playing the guitar has been in charge of the music since the Second Vatican Council. She’s 95. Can you imagine? And she’s still going and leading the singing.

As I looked out at the people while celebrating the second Mass, it became very clear to me that I did not favor the candidate that many of them had most likely voted for in the recent election. And that got me thinking.

I’m sorry to admit I didn’t pay much attention to the readings or the responsorial psalm. I just kept thinking: We voted for different candidates. I was sure these are good people. They are doing their best, trying to love God and their neighbor. So am I. How could I dislike them? How could I think ill of them? They are trying. So am I. They are failing and succeeding. So am I. They want a better future for their children. So do I. The more I looked at them, the more impossible it was for me to vilify them and think of them as the enemy, as people I dislike, as people I couldn’t stand.

Tomorrow a new president will be inaugurated. And we will have to support him as much as we are able. What common ground can we find? I have always known that there are good Catholics on both sides of the issues. And as much as I wanted to dislike the people in those pews, I just couldn’t. I kept thinking, For God’s sake, we’re at the Eucharist together and here I am trying to find ways to dislike you people. But thankfully I could not.

At the coffee and doughnuts after Mass we did not talk politics. We simply visited and talked and shared hopes for the year, the hope that God would be revealed to us moment by moment, day by day, week by week, month by month.

Like all other years, 2017 will be a year of grace. By a year of grace, I mean this: Everything is a grace. What a difference it would make if I were to welcome everything that happens to me as good news. It may require some extra digging sometimes to get beneath the surface and discover the grace, but how much agony I would save myself if I really believed, as St. Paul writes in his Letter to the Romans, that nothing can separate us from the love of God. If I truly believe that, then I can live life with a confidence that allows me to greet every new situation with a childlike hope, which is the exact opposite of the dread and anguish so many people feel in facing the future.

On January 1 we celebrated the feast of Mary, Mother of God. You can be sure that when Mary, at age 14, stood in front of a new year, however the calendar was when she lived, she did not think that one day while having the equivalent of a cup of hot chocolate with marshmallows the angel Gabriel would visit and ask her to become the Mother of God.

But because she had learned to trust in God completely, she said “yes” to a mystery she did not understand and, in fact, never quite understood fully. So hope exists that in some hidden way God is working through every situation to bring about good. It is with this faith and expectancy that God invites us to welcome 2017.

Such faith reassures us that it doesn’t really matter whether what we are experiencing is joy or pain, because both are graces of God. Everything is a grace. Everything.

What a moment of grace and mercy it was for me to celebrate the Eucharist with people I would not have chosen. Mercy makes it possible for us to pray with everyone.

Father Joe Corpora, CSC, is the director of the Catholic School Advantage campaign within Notre Dame’s Alliance for Catholic Education (ACE) program and associate director, pastoral care of students, in the Office of Campus Ministry. He is one of 700 priests whom Pope Francis appointed in February 2016 to serve as Missionaries of Mercy.