I never had much interest in going to the Holy Land, primarily because I thought that it would never happen. But on the Thursday after commencement I found myself with a group of pilgrims on a plane from New York to Tel Aviv. I will be eternally grateful.

We landed in Tel Aviv around 5:00 p.m. I changed my dollars to shekels and boarded the shuttle to Notre Dame’s Tantur Ecumenical Institute. This sounds kind of silly, but I kept laughing every time I thought about having shekels in my pocket! Shekels is such a funny word to me. Upon arriving in Tantur we had dinner, time for a short rest and then Mass.

Some first impressions: I could not stop thinking of my mom (may her soul rest in peace), who was Syrian. Her parents were born in Aleppo, Syria, and immigrated to the United States in the 1920s. People everywhere looked like my mom. I heard them talking in Arabic, and so many phrases and sounds from childhood would come back to me, especially the guttural sound that comes from somewhere deep in the throat. How I wish I had learned Arabic when I was a kid! Mom was much more Syrian than I thought.

We had sauseegio for dinner. I have no idea how to spell that word, but I remember that food so clearly from when Titah, my maternal grandmother, would make them. They are thin little sausages and they are very good. They have great flavor. We also had za’atar. I have no idea what it is, either. You take a piece of bread, smear olive oil on it and then you put za’atar on it. It’s a mixture of different seeds, I think, but we used to call it Syrian dirt. Za’atar is totally delicious. 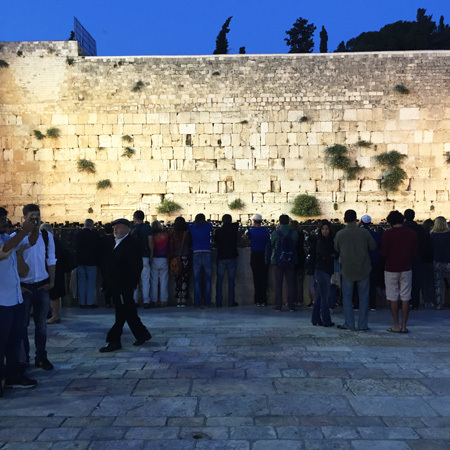 The next day after dinner we went to the Western Wall in Jerusalem, also known as the Wailing Wall. It is the only standing wall from the Temple where Jesus preached. Thousands of people come to the Western Wall every day, but mostly on Friday night when the Sabbath is beginning. Most were Orthodox Jews coming to pray. Before entering we washed our hands with jugs of water from a fountain. I stopped to think that Jesus did the same thing in the same spot. As I got closer to the wall itself, I had to put on a white skull cap like Orthodox Jews wear. A guard motioned to me to tuck my cross inside my shirt.

When I touched the wall I prayed for my family and friends. I prayed for peace. I kept touching the wall and running the palm of my hand on it. I kept asking Jesus to make me like him. All I thought is that Jesus might have touched that very spot on the wall, but even if not, he preached in that temple. It was very moving.

In the morning we went to Bethlehem. First we went to Shepherd’s Field, where the shepherds were tending their sheep when the angels told them of the birth of Jesus. You walk through a big archway with the words Gloria in Excelsis Deo. Beautiful.

We celebrated Mass in an outdoor chapel. It was peaceful and calm. We celebrated the Mass of Christmas Day and sang Christmas songs. On the one hand it felt strange to be singing “Hark the Herald Angels Sing” and “Angels We Have Heard On High” on May 21. But on the other hand it was amazing to sing those songs in the field where the angels first told the shepherds about the birth of our Savior.

Later I went into several caves where the shepherds would have stayed at night. People were again singing “Angels We Have Heard On High.” The “Gloria” refrain made me cry.

After lunch we went to the center of town, called Manger Square. First we went to the church of the Milk Grotto. The story says that while Joseph and Mary were fleeing with Jesus to Egypt, Mary was nursing Jesus and a drop of her breast milk fell to the ground. The ground turned a whitish color and has been that way ever since. There is a spectacular painting there of Mary nursing Jesus — one you do not see often, if ever. I had never seen it before. Hundreds of couples go to this church every day to pray to Mary to conceive a child.

And then we went to the Church of the Nativity. I will never forget what it felt like to kneel down and kiss and touch that spot where Our Lord was born. I just kept rubbing my hand on it. I am so thankful to have done this.

It’s a very commercial place with vendors selling their wares everywhere. On the one hand it seems so strange to see people and vendors selling things in this most sacred place. I suppose it’s like grace and sin, always at work in us. In the same day I can be generous to a stranger and mean and stingy to a friend. 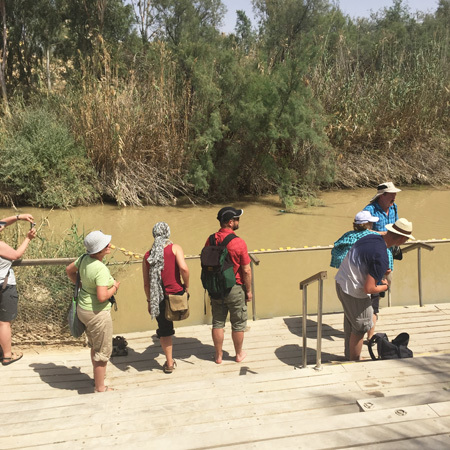 The highlight of the day was celebrating Mass at an outdoor chapel just 20 yards from the Jordan River where Jesus was baptized. Can you imagine? John the Baptist being there and baptizing Jesus?

We celebrated the Mass of the Lord’s Baptism and renewed our baptismal promises. Afterwards we walked to the Jordan, where many people were getting baptized. I took off my sandals and walked in. You’d think that the river where Jesus was baptized would have clear and sparkling water. But no, it’s dirty and muddy. Maybe that’s appropriate. Life is much more unclear than clear, more muddied than sparkling, more gray than black and white. My pants got wet, but they dried so quickly in the desert. The dry heat reminds me of Arizona.

The other highlight of the day was Jericho. The city claims to be almost 12,000 years old, the oldest consistently inhabited city in the world. Ancient buildings and ruins, and signs everywhere for Kentucky Fried Chicken, Snickers bars and Sprite. We went to see the sycamore tree that Zacchaeus climbed so he could see Jesus walking through town. To get there we drove on the road where Jesus mostly likely told the parable of the Good Samaritan. 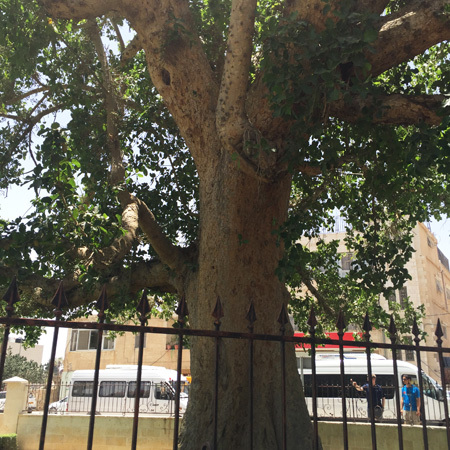 This was a day I will never forget. We left Tantur at 5:30 a.m. to go to the Church of the Holy Sepulcher. From the earliest days, Christians have kept holy the sites where Jesus died on the Cross and where he was placed in the tomb. The church was built over all these sacred sites.

Inside, the first thing you see is a stone slab believed to mark where the body of Jesus was laid after he died on the Cross. It’s about 1200 years old. So although it is not the same stone slab where Jesus’ body was laid, it’s the same spot. As you might imagine, there is a lot of reverence around the stone. I knelt down and kissed it. And I prayed asking forgiveness for all my sins and in gratitude to Jesus for dying for all my sins. I prayed to be open to his mercy so I could be a more merciful person.

The stone had a beautiful smell to it. I learned that people come and anoint the stone with scented oils like the women anointed the Body of Jesus after he died. I knew that I would want to return to that spot later in the day when time permitted.

There is an altar and chapel on top of the spot where Jesus was nailed to the cross. It’s called the Chapel of the 11th Station. I had the great honor of celebrating Mass for our pilgrimage group at that spot. And just next to the altar, perhaps 15 feet west, is the spot where Jesus died on the cross. It is marked by a beautiful altar and lots of candles and other signs of reverence.

After Mass, we walked to see other places, including a mosque, Mary’s childhood home, the Church of St. Anne, dedicated to Mary’s mother, and the pool of Bethesda, where Jesus performed a few miracles. Eventually we reached the Via Dolorosa, the Way of the Cross. We first stopped at the place known as Ecce Homo, “Behold, the man.” You can see what is believed to be the bench Pilate sat on when he sentenced Jesus to die.

Every so often along the Via you will see a Roman numeral and an inscription that marks a station. There are shops and stores and ATM machines and kids running and people selling food and drinks all along the way. At first I was expecting to find the Via Dolorosa quiet and prayerful and lonely. It is the exact opposite. It is loud and noisy and messy and filled with people. But that is how it would have been when Jesus walked that path many years ago. There would have been people buying and selling and trading and making deals, kids running and playing and yelling, teenagers laughing and whispering, and so on. It’s all very real. It makes you realize in a profound way that Our Lord was human and walked the same earth that you and I walk and entered fully into this world and life and everything else. It is extremely powerful but in a different way than you might think at first. It’s as real as anything that I have ever seen.

While walking the Way of the Cross, I had a glass of freshly squeezed orange juice and then we stopped for lunch. We had three things that I could eat every day for the rest of my life: Syrian (pita) bread, hummus and falafel. What more do you need?! It was delicious.

After lunch the group went to visit another site, but I went back to the Church of the Holy Sepulcher. On the way I bought some olive wood rosaries and a small jar of anointing oil. 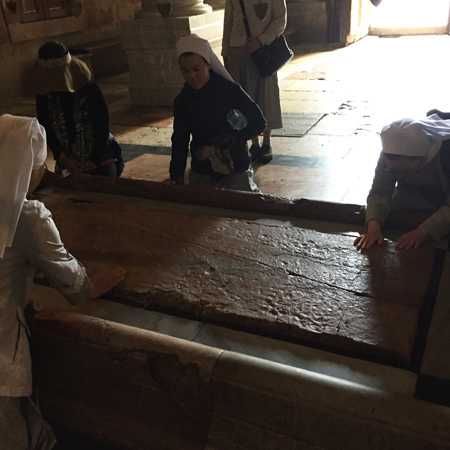 I went to the stone slab where Jesus was laid after he was taken down from the Cross. I knelt and prayed and poured a few drops of oil over the stone. I gently spread the oil with my hands and then my hankie, imagining that I was anointing the Body of Jesus. And then I remembered the woman in the gospel, and I poured the entire bottle onto the stone. It was so prayerful. There is never a moment when people are not all around the stone doing the same thing — anointing the stone, kissing the stone, rubbing the stone, praying. I kissed the stone many times and put my forehead on it and prayed and cried. I took all the rosaries I bought and rubbed them on the stone.

Then I walked to the altar placed at the spot where Jesus died on the Cross. There are hundreds of people in line. I knelt down and touched the spot. My heart was filled with gratitude to Our Lord for all that He has done for me. I will never be grateful enough for his mercy poured out into my life.

Father Joe’s reflections on the paradoxes of the Holy Land, of religious faith, of life will continue next Thursday, July 7.