Conclusion of a two-part series.

The Church of the Holy Sepulchre is shared by Orthodox Christians and Catholic Christians and a few other Christian groups. They do not get along. So I am told that a Muslim has the key to the church and is in charge of the building, so to speak. None of the Christians trust each other, but they will trust the Muslim.

When I went to the sacristy at 6:20 a.m. to get ready to celebrate Mass, an event thought to be outside of time I was told kindly, but sternly, by a young Franciscan priest who works in the sacristy, “Twenty-five minutes for Mass, Father. No longer, please! There’s another Mass at 7:00.”

Later, when I walked out of a restaurant on the Via Dolorosa almost overdosing on falafel, I looked up and saw the “V” station marker on a wall. This is where Simon of Cyrene offered to help Jesus carry his cross.

I could write pages about the paradoxes I have seen here. And yet what is the Paschal Mystery in the end? That dying is rising. Try making sense of that in your own life if you want to live in a black and white world. And what of the Incarnation itself? Yet another paradox — that the maker of humanity would become human, that the one who existed from before time would be born into time, that the giver of Baptism would ask to be baptized, that the only One who can quench our thirst would ask the woman at the well for some water to drink. Being in the Holy Land has affirmed what I have come to believe in my own life — the older I get, the better I look in gray.

We visited six churches on holy spots and took time to pray at each one. St. Helena, the mother of Constantine, came to the Holy Land in 326 and for two years traveled about finding all the sites that Christians revered and kept holy. She saw to it that churches and chapels and shrines were erected on them.

We first visited the church that commemorates where Jesus mounted a donkey to ride into Jerusalem as his passion was about to begin. Each year the Catholics in Jerusalem begin Palm Sunday Mass at this spot. 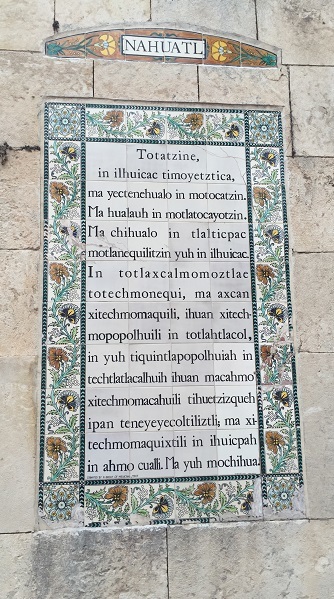 Then we visited the Church of the Pater Noster, where Jesus taught his apostles to pray the Our Father. The prayer is lovingly written out on ceramic in large letters in 174 languages, each one more beautiful than the next, displayed all around the gardens. The entire area is so prayerful.

Next we celebrated Mass at the church called Dominus Flevit, which means “The Lord wept.” Jesus wept over Jerusalem from the most beautiful panoramic view of the city. A man there was giving rides on a camel. We didn’t have time. I was so disappointed because I wanted to ride that camel!

The Basilica of the Agony in the Garden of Gethsemane marks the place where Jesus prayed that he might not undergo his impending suffering, but concluded “your will be done, Father, not mine.” I could have stayed there hours to keep watch with the Lord, but like his apostles I probably would have fallen asleep.

Next was St. Peter in Gallicantu, where Peter denied Jesus three times. Finally, we visited the Church of the Ascension. This is the place from which Jesus ascended into heaven 40 days after his resurrection. It is owned by the Muslims, who let Christians visit it for an entrance fee. Can you imagine? A footprint there, molded into clay, is supposed to be Jesus’ last footprint. Many will say this cannot be proven. Yet the fact that millions of people for 2000 years have gone there and knelt down to kiss that footprint makes it very real to me. As the Japanese novelist Shusaku Endo writes in A Life of Jesus, “what might not be an historical fact can still be truth for our souls.” I read that years ago and have never forgotten it.

Nazareth is a two-hour bus ride from Jerusalem. It gave me a sense of how far Joseph and Mary came when they had to travel to Bethlehem. In those days it had to be a three to five-day trip each way.

After lunch we went to the Basilica of the Annunciation, built on the spot, marked by a shrine, where tradition says the angel Gabriel came to Mary and asked her to be the mother of Jesus. It is the biggest Church in the Middle East. A Latin inscription reads, "The Word Was Made Flesh Here.” I could not stop looking at that shrine. And at the word Here. How many hundreds of times have I prayed “And the Word was made flesh” in the Angelus? But, Here!

After Mass we drove to Tiberias and checked into a hotel on the Sea of Galilee. As I looked out from my room, I imagined Jesus on a boat talking with his apostles. Jesus and his followers hauling in the catch of 153 fish. Jesus on the shore cooking breakfast for his followers.

We left Tiberias early and made many stops. Our first was in the far north of Israel at Caesarea Philippi, where Jesus asked his disciples, “Who do you say that I am?” Simon Peter confessed that Jesus is the Lord, the Son of God. And Jesus calls him “Peter” and tells him he will be the rock upon which Jesus will build his Church.

I wish you could see the rock Jesus might have been referring to. It is ENORMOUS.

After Caesarea Philippi, we went to Capernaum, where Jesus met Peter for the first time, right on the sea. We saw where Jesus multiplied the loaves and fishes, and after lunch we went for a one-hour boat ride. Many of us were hoping to jump from the boat and swim to shore as Peter did. But it was too windy and they would not let us do it. Sad to say that it seems like risk management has found its way to the Sea of Galilee.

The bus took us to the Mount of Beatitudes where Jesus preached what we know as the Sermon on the Mount. We celebrated Mass under a pavilion and listened to both Matthew’s and Luke’s account of the Beatitudes. It’s an amazing thing to listen to Gospel accounts where they happened.

After breakfast we went to Mount Tabor, a very high and steep mountain. No wonder Jesus was so skinny. My new title for him is Jesus, the Mountain Climber. At what seems like a very high point, you can take a taxi to the top — 562 meters above sea level. I stood in awe thinking that on this mountain Jesus was transfigured and revealed to his followers as the Son of God.

In the afternoon the bus took us to the town of Caeseara. Paul met Cornelius here and it was revealed to him that the Gospel message was meant for everyone. Paul set out from Caesarea on many of his trips to bring the Gospel to faraway lands. We just took the bus back to Tantur.

Today the group went to Masada, an important place in Jewish history. I decided not to go. I wanted a day alone and I wanted to go back and see a few places that we had already seen. And I wanted to buy a few things.

I walked from Tantur to the Bethlehem checkpoint and then took a taxi to Manger Square. I arrived at the Church of the Nativity just after 8:00 a.m., so it was not crowded. I wanted to pray gain in the place where Jesus was born, asking him to be born in me more and more.

Later I crossed back into Jerusalem. I had been so taken by the Church of the Holy Sepulchre on Monday but I had not gone to the tomb itself. There was a very long line, but my turn finally came to go in.

What can I say? Inside the ornate structure — only four people may enter a time — I kissed the tomb and prayed in thanksgiving for all that Jesus did to set me free and asked him to make me more grateful for that freedom. You can only stay about a minute. A stout Orthodox monk who looks like a cage fighter keeps everyone moving through.

I also wanted to go back to the stone slab and the altar of the cross. I kissed that spot and prayed, “Lord Jesus Christ, Son of the Living God, have mercy on me, a sinner.” I love that prayer. 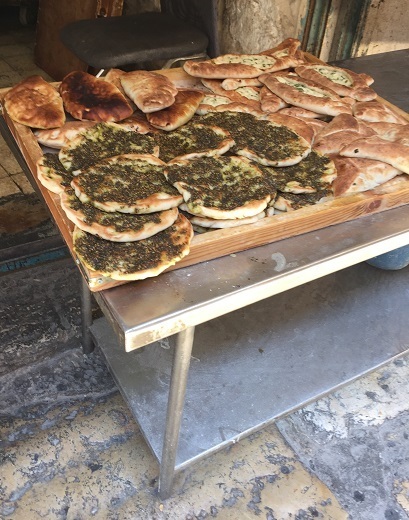 Then I went to do some shopping. I bought a new suitcase to carry all the souvenirs I bought. As I was walking towards the Jaffa Gate to look for a taxi back to Tantur, I could smell hot baked bread. It was Syrian bread smothered with za’atar. I could have eaten 10 of them.

It’s too early to say what this pilgrimage will mean to me over the next few years. But I can say this: I do not believe in Jesus any more now than when I started the pilgrimage. But seeing where he lived, walking in his footsteps, visiting so many holy sites — all this has made me want to know Jesus better. I know I will read the Gospels with a fresh eye and ear. When I hear words and phrases like — “Jericho,” “Mt. Tabor,” “the loaves and fishes,” “Simon, do you love me more than these?” and “the shepherds who were tending their flocks” — I will listen more attentively. In knowing Jesus better, I will want to love him more. And in loving him more, I will want to live more like him, to be transformed into him.

Oh dear God, please grant this prayer. Lord Jesus Christ, Son of the Living God, have mercy on me, a sinner.