One of my most memorable proofs of the power of liturgy comes from early in my career. It was 1990, and, at 35, I had just been named pastor of St. John Vianney, a Holy Cross parish in Goodyear, Arizona. I was surprised, shocked even, to have received the appointment, not knowing then that the provincial had already been told “no” — something I was not yet smart enough to say! — by three priests before asking me. A few weeks into my tenure (in what I can only hope is a coincidence), the United States went to war.

The Persian Gulf War broke out in August of 1990, with one of our parishioners, a young man named Eliseo Felix, among the troops. Eliseo had joined the Marines in May after his high school graduation and I arrived in July, so the two of us had never met. But, a few months into the conflict, the news arrived that he had been killed in the war. 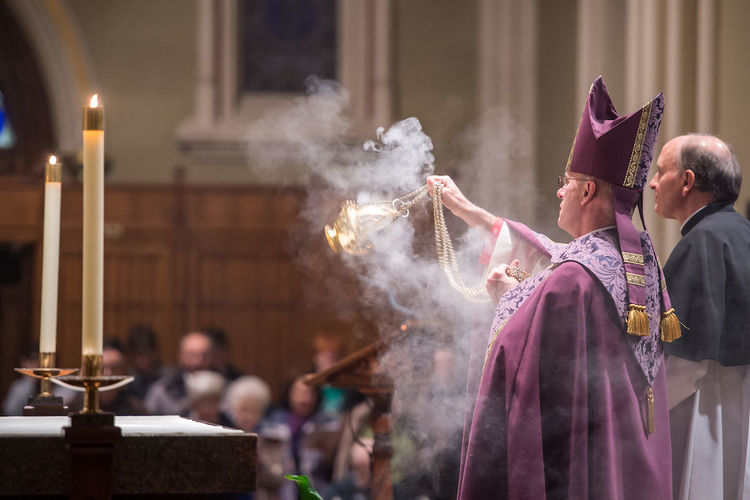 The traditions and rituals of the Church can bring comfort in our times of greatest need. Photo by Matt Cashore '94

The death of anyone in any place is tragic, but in a small town where everyone knows everyone, it seems even more so. Goodyear was a town of less than 8,000 people. It seemed that the entire town learned of his death in a matter of moments, leaving everyone in sorrow and grief.

I don’t remember who told me that Eliseo Felix had been killed, but I know I was told on Sunday morning before the first Mass of the day. And I remember being told that no one knew when his body would be brought back to the States.

I knew that the first thing that I wanted to do was visit his mother, Hortencia. And the other thing that I had to do was to gather the parish for Mass to pray for the repose of his soul and for his family and for peace. Once the Sunday Masses were over, I went straight to Hortencia’s house and asked her: Since we did not know when her son’s body would be returned, could we have a Mass for him on Monday night? She said that she would be grateful. So we planned to have a Mass for him on Monday night. The word got out right away.

Hortencia was a quiet, shy woman, and now she was in grief. The news around this event was relentless, and every news station in Phoenix wanted to get to her and talk with her — even calling me to ask how to get in touch with Hortencia. Soon, of course, they learned of the Mass at St. John Vianney. The news stations and cameras were there hours before the Mass was scheduled to start at 7 p.m.

The Mass was beautiful and the Church was filled with hundreds of people, extending even into the atrium. After Mass I drove Hortencia back to her home, and we had a conversation.

This is the power of liturgy, of good liturgy. When we don’t know what to say, the Church puts words in our mouths. When we are completely incapable of thinking, of knowing what to do, the liturgy of the Church gives us words and gestures and movements. Without knowing it, Hortencia explained to me in 10 minutes the real power of the Church’s liturgy. It can help us move and function when we otherwise, for whatever reasons, are unable to do so.

Pope Francis says that we need to be reminded as often as possible that the name of God is mercy, and, in the liturgy, there are many reminders. Each time we celebrate the Eucharist, we hear of the Lord’s mercy for us again and again.

“Lamb of God, you take away the sins of the world, have mercy on us.”

“Remember also our brothers and sisters who have fallen asleep in the hope of the resurrection, all who have died in your mercy.”

“By the help of your mercy, we may be always free from sin and safe from all distress.”

May we never tire of hearing these words spoken to each one of us. May we always be open to the inexhaustible mercy of God and then share that mercy with those near and far.