ROME — Sunday, November 20, Feast of Jesus Christ, King of the Universe and the Closing Mass of the Jubilee Year of Mercy.

I arrived at St. Peter’s Square at 8 a.m. for the 10 a.m. Mass. Some 70,000 people would fill the piazza and thousands were already in line trying to get through security. Thanks to an Italian priest, I found my way to the entrance for priest concelebrants. Once I made it through, I was asked if I would help distribute communion. Not every priest got to do this, so of course I would. To my left were tables filled with bowls of hosts and chalices of wine, an amazing sight to see. 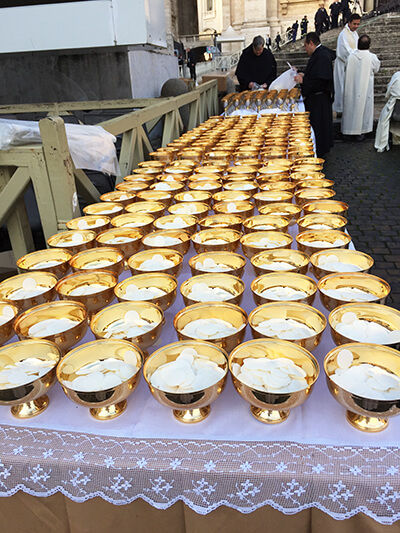 I could not see Pope Francis directly from where I was sitting down below the altar, but I could see him on a big screen television as Mass began on time with the closing of the Holy Door. I have so loved this year and being a missionary of mercy that I had thought about sneaking into St. Peter’s and getting behind the door, so that when the Holy Father tried to close it, it wouldn’t. Watching the Holy Father close the door and listening to the prayer he led was beautiful.

Then Mass itself began. At the creed, I received a bowl of hosts with one hand and a chalice of wine with the other. I thought, There goes any chance of scratching my nose until after communion.

During the consecration, we concelebrants lifted up the bowls and the chalices. After the Lamb of God we were directed to stations. My job was to bring communion to priest concelebrants who were not distributing it. So I went to each priest with the body and blood of Christ.

When I finished I asked the master of ceremonies how I was supposed to receive communion. He said, In basilica dopo — “In the basilica afterwards.” So the other Eucharistic ministers and I walked all the way around the piazza, inside the Apostolic Palace and into the basilica — thereby getting me my 10,000 steps for the day.

I became fast friends with Alessandro, one of the secret service guys, who told me, Aspetti, Padre — “Wait, Father” — each time I lunged forward.

It was amazing to see St. Peter’s empty except for the priests. I put the body and blood of Christ on the table, received communion, and followed the others back toward the piazza. When we went out the doors I saw that the pope was about 25 yards away. I said to myself, “I’m not going back to my seat. I’m staying up here.” So I casually slipped into the nearest rows of priest concelebrants for the closing prayer and the final blessing. And little by little I began to inch my way forward.

When I made it to the front row of the priests I found there were about ten secret service men at the dividing line between us on one side and the bishops and cardinals on the other. I said to one of the men in Italian, “I forgot my red hat.” He looked at me and said, Non e vero, Padre. “That’s not true, Father.”

Okay, it wasn’t true. But when you’re that close to the pope, you’ll try anything.

After the blessing there was a brief ceremony. Pope Francis had written an apostolic letter — Mercy and Misery — to commemorate the end of the jubilee year. He had hand-signed six copies and six delegations of people came forward from all parts of the world to receive it. When this was finished, everyone began to leave the altar area.

Then the pope walked toward the cardinals, and I saw he was going to greet them one by one. There were about 50 of them and I was about ten yards from him at this point. Meanwhile, a long line of priests had formed, hoping that the Holy Father would greet them. I don’t remember how it happened, but I was part of the line. I became fast friends with Alessandro, one of the secret service guys, who told me, Aspetti, Padre — “Wait, Father” — each time I lunged forward.

Sure enough when the Holy Father greeted the last cardinal he came over and began to greet us one by one. He would smile, shake hands and move to the next priest.

I thought of how tired he must be. It was already noon. And yet I could see him smiling at each person. It made me think back to when I was a pastor and would greet people after Mass. I know I didn’t smile at every person, especially when I was tired. Yet the pope kept smiling and shaking hands.

As he got closer and closer to me, I thought, This is really going to happen. I am going to shake hands and speak with the pope, the Holy Father, the Supreme Pontiff, the Vicar of Christ on Earth! He came and stood right in front of me. I didn’t even think about what to do, or if I should do it. I did what was natural when you love someone. I embraced him and I kissed him.

Then I spoke to him in Spanish. I said, “Thank you so much, Holy Father, for sending me as a missionary of mercy.” He said, “You are still one. This ministry is to be ongoing.” I told him I would be honored to keep serving the Church as a missionary of mercy. Then I thanked him for all he has done for the Church and the People of God. And I told him I love him. I took out my rosary from my pocket and asked him to bless it. He did.

I learned later by reading his apostolic letter that he has asked us missionaries to continue in this role for the indefinite future. He wrote:

“We are called to promote a culture of mercy based on the rediscovery of encounter with others, a culture in which no one looks at another with indifference or turns away from the suffering of our brothers and sisters. The works of mercy are “handcrafted,” in the sense that none of them is alike. Our hands can craft them in a thousand different ways, and even though the one God inspires them, and they are all fashioned from the same “material,” mercy itself, each one takes on a different form.” 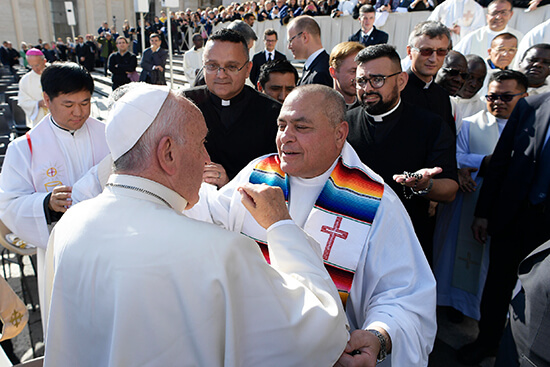 When the Pope spoke to me he was entirely present to me, practicing what he wrote about. It was as though there was no one else there but me.

I love the Pope. I wanted to remain in his presence, to hold on to him, to look at him, to hug him again, and to tell him how much I have learned from him and how grateful I am for his ministry and the example he has set for all of us.

Why did I want so desperately to meet Francis? Well part of it is, of course, that he is the pope. But it’s much more than that. It’s because of who he is as a person, as a disciple of Jesus, as a fellow sinner whose sins are forgiven. He is an amazing man who has invited the entire world to accept the mercy of God and to extend it to everyone. Here’s a little more of what he wrote:

“The Jubilee impresses upon us the words of the Apostle Peter: ‘Once you had not received mercy, but now you have received mercy.’ Let us not hold on jealously to what we have received, but share it with our suffering brothers and sisters, so that they can be sustained by the power of the Father’s mercy. May our communities reach out to all who live in their midst, so that God’s caress may reach everyone through the witness of believers.”

I still can’t believe I hugged the Pope! I will never forget that moment of grace. Thank you, Pope Francis. Thank you, Jesus.

(And never go back to your seat!)

Father Joe Corpora, CSC, is the director of the Catholic School Advantage campaign within Notre Dame’s Alliance for Catholic Education (ACE) program and associate director of Latino student ministry in the Office of Campus Ministry. He is one of 700 priests whom Pope Francis has appointed to serve as Missionaries of Mercy.