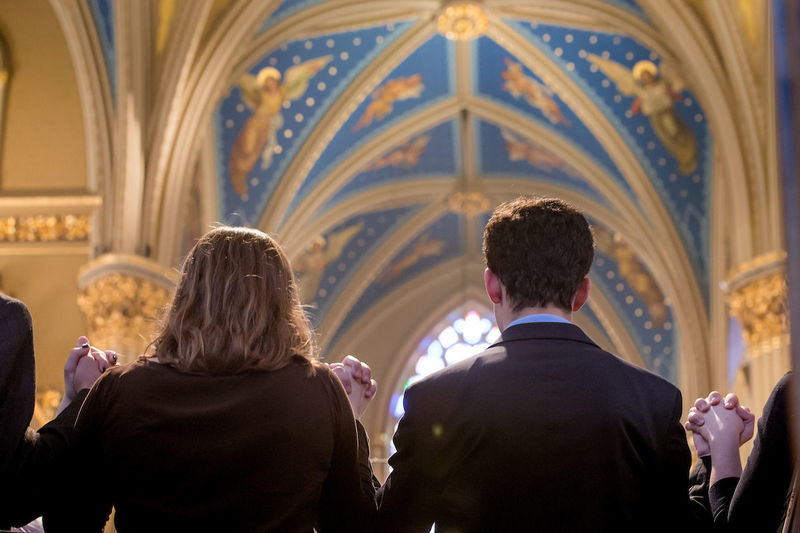 Every year on the third Saturday of Lent, we hear the Gospel of the parable of the Pharisee and the tax collector.  We know the parable well.

The Pharisee enters the temple, takes up his position in the front of the temple and prays, “O God, I thank you that I am not like the rest of humanity — greedy, dishonest, adulterous — or even like this tax collector.  I fast twice a week, and I pay tithes on my whole income.”

The tax collector enters the temple, takes up his position at the back of the temple and prays, “O God, be merciful to me, a sinner.”

It seems at first that this parable is about the pride of the Pharisee and the humility of the tax collector.  Listeners try to figure out which one they are, and are doomed — because if you figure out which one you are, there’s some pride in the discovery, no matter the outcome.

The Pharisee was considered an insider and a member of the religious elite, and he only did what the temple rules at the time required for someone of his standing. In fact, the social context of the temple as we now know it from historical documents would depict him as the ideal, pious Pharisee!  His conduct, prayers and speech are typical of his role.

The same social rules determining the proper conduct of the Pharisee, of one belonging to the sacred precincts of the temple as an insider, also determine the place, the stance and the prayer of the tax collector.  He belongs to the group outside the bounds of the temple.  He stands apart because he knows that, as an outsider, this is his place.  The position that he took was not a manifestation of his humility, but simply of his awareness of his proper place as a sinner and not as a Pharisee.

Thus, the two men described in the parable stand in their relative place and status within the accepted culture of the time.  One, the “insider,” belongs to the sacred precincts of the temple and is an insider, and the other, an “outsider,” belongs to the secular world. The social map calls for him to pray apart from one another. So, from the text, there is no evidence of merit or blame in the conduct or the prayers of the two men.

Yet Jesus stuns the hearers with the conclusion:  “The tax collector went home to his house justified.  The other man did not.”

These words are a total shock to the crowd.  How could the holy one go home without being justified?  And how could the sinner go home — to the secular world — justified?

The main point of the parable is now very clear: Through Jesus, the social map of the time is being abandoned, and the kingdom of God is no longer to be found only in the temple.

The idea that the sacred place is right where you are is a revolution in the popular concept of the sacred.  There are places such as churches and shrines where we are spiritually renewed, where we hear the word of God, and where we may have spiritual experiences.  According to this parable, however, they are not the usual places where transformation takes place.

Daily life in the secular world is the place where transformation in Christ is worked out.  This is what transformation is.  It is not going on a pilgrimage or entering a special state of life.  It is how we live, where we are, and what we do with these circumstances.

For most of us, the ordinary circumstances of daily life bring back the same faults, the same temptations, the same routines, and often the same sense of going nowhere.  But “nowhere” is where the Kingdom of God is most active.

Grace and daily life are always in dialogue and sometimes in a state of war.  There is a struggle to figure out what God is saying in the events and circumstances of daily life and how everyday life is meant to transform us.

For most us, daily life sounds like this: How can people do this to me?  Why is my spouse treating me like this?  Why are my children misbehaving?  What am I going to do about my mother and father now that they are ready for a nursing home?

With such reflections buzzing in our heads, how do we listen to what the Spirit is saying?  How do we act out of divine love?

These are difficult questions, but this parable — like the quotation from Therese of Lisieux that tells us that “everything is grace” — proves that answering them is possible. When we begin to experience from the inside out that everything is truly a grace, we are being transformed, not through a sublime experience in a sparkling cathedral but in the daily struggles of our everyday lives. As this Lenten parable teaches us to do, we are finding God in day-to-day life.

Lord, Jesus Christ, Son of the Living God, have mercy on me a sinner.

Father Joe Corpora works in the Alliance for Catholic Education and in Campus Ministry, lives in Dillon Hall and is one of 700 priests whom Pope Francis appointed in 2016 to serve as Missionaries of Mercy. He has written two books of reflections on this experience, The Relentless Mercy of God and Being Mercy: The Path to Being Fully Alive, both published by Corby Books.