When the Extraordinary Year of Mercy proclaimed by Pope Francis ended on November 20, 2016, he closed the Holy Door in Rome. On that same day, the Holy Father issued a letter called “Misericordia et Misera.” In that letter he asked the Missionaries of Mercy, whom he had commissioned and sent forth the previous Ash Wednesday, to continue serving the Church in that special role even after the year had ended.

I was in Rome that day.  It’s a day that I will never forget, because I got to talk with Pope Francis, to hug him and to tell him how much I loved him.

Though I have fewer commitments now than I did during the Year of Mercy, I continue to serve the Church as a Missionary of Mercy in any way that is asked of me. 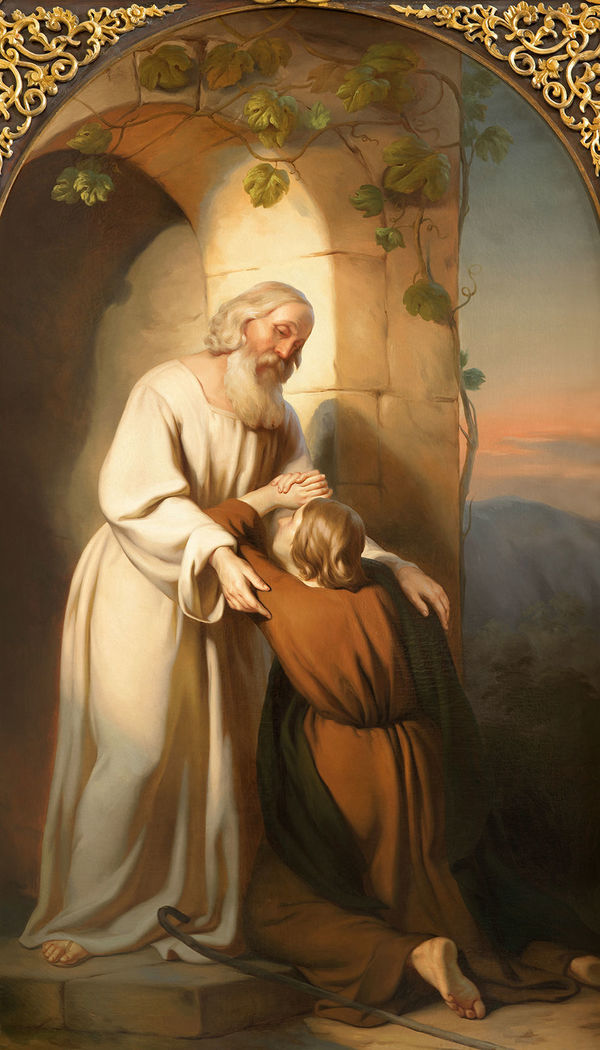 Each group identified with the Prodigal Son and the other Parables of Mercy in different ways. Photo via Shutterstock

Recently I gave more or less the same talk, focused on the Parables of Mercy, to three very different groups. In each case — in a convent, before an archdiocese and in an Indiana state prison — I thought of the varied life experiences that people bring as they listen to the Gospel. As the saying goes: “Where you stand depends on where you sit.”

First, I had the wonderful privilege of preaching a Lenten Day of Recollection on the parables to about 80 Sisters of the Holy Cross at Saint Mary’s College.  The group included aged and infirmed sisters, many of whom watched from their rooms in the infirmary via closed-circuit TV; some active sisters; a number of novices from many of the countries where the Sisters work and serve; and several Holy Cross Associates.

What a blessing to be able to speak to these women who have dedicated — or are about to dedicate — their lives to serving God and the Church. Many were nodding and taking notes as I talked. I cannot say this for sure, but I would imagine that, as I discussed the Parable of the Prodigal Son, most would have identified with the older brother. I say this gently. The sisters know their need for mercy, but like so many good and well-behaved people, they might only know it intellectually.

The Parable of the Workers and the Vineyard reveals a landowner who goes out at 6 a.m., at 9 a.m., at noon, at 3 p.m. and an hour before quitting time, always in search of more workers for his vineyard. At the end of the day, he pays each the same amount. In this moment where the last becomes first, the parable — a bit like the Prodigal Son — reveals the Father’s urgent concern for the outcasts, the marginalized, the idle. Grace and help are just as available for the well-behaved as for these characters at the margins — it’s just that the well-behaved often do not know it.

To the laborer who began work at 6 a.m., it seemed unfair to be paid the same amount as those who arrived just before closing time. Again, I can’t say this for sure, but I have a feeling, had the Sisters been working in that vineyard, most would have been in the group who arrived at the crack of dawn.

Three days after the Saint Mary’s event, I preached at a similar Day of Recollection for 110 principals and school leaders from the Archdiocese of Milwaukee, a wonderful group of people who have given their lives to educate young children and teenagers, who have devoted countless hours to Catholic education. By and large, principals are practical people. They deal with all sorts of different students and families. As they listened to the Parable of the Prodigal Son, many might have been thinking of the children in their schools — which child is which brother?

In the Parable of the Workers and the Vineyard, these administrators would probably have sided with those who complained about receiving the same pay for 12 hours as the group that worked for one hour. This kind of parable would make the folks in the Office of Human Resources go crazy!

A few days later, I had the unique privilege of talking about the Parables of Mercy to six prisoners at the Westville Prison, about an hour west of South Bend. What an incredible experience to sit around a table with six guys and talk about these parables. One of the first things that I noticed is that they all wear nametags, each reading “OFFENDER” on one line and the person’s last name on the next. I did not like that. Imagine being known, and worse, thinking of yourself as OFFENDER. God never thinks of us in those terms. God can only think of us as his beloved children.

As I read Luke’s Parable of the Prodigal Son, it was clear that the men around the table all identified with the younger brother. Some felt the connection less than others — in the prison hierarchy of crimes, someone imprisoned for drug trafficking may feel less “prodigal” than someone else imprisoned for murder — but each of the men had insightful responses. One guy said, “I always have thought of myself a bit like the older brother in this sense. I grew up in a very diverse world. And so I grew up without racism. I prided myself in not being a racist. And then it hit me: I can’t stand racists. And that’s just as bad a being one.”

Since many of the men in prison might have been those hired last, they were delighted to learn of a landowner who goes out looking for more workers even at the 11th hour. They were happy to know of a leader who cares so deeply about everyone that he does whatever he can so that no one is lost.

I loved listening to the questions and thoughts and sharing of these men in prison. It’s clear that they know their need for mercy, and not just intellectually. They know their need for mercy in the flesh. It’s real for them. They want it so badly that they can taste it. For the men in prison, mercy is not abstract, but concrete and real. And they want it.

Each group — the Sisters, the Principals, and the Prisoners — were a little surprised that both the older and the younger brother have the same need for mercy. The younger brother thinks that he’s too dirty to receive mercy while the older brother thinks that he’s too good to need mercy. All three groups were surprised to know that whether we think that we are too good to need mercy or to bad to receive mercy, the fallacy is the same. Both sons disrespected the father by not believing in all that he wanted to give them.

As I pointed out to each group, and I’m very fond of saying, it doesn’t matter who you are. In the end, it is the mercy of God that will save us all. Because God is faithful, he will offer his mercy to us in as many ways as possible until we accept it. Sit where you will, stand where you will — God will have his way with us. One day we will accept his mercy, even long for his mercy…and let it save us.