The great Jacques Maritain may have been less authoritative an art critic than a philosopher, but it’s difficult not to sympathize with his grumpy remark that far too many of the artists of his own era had found “a means of releasing the resentments of a boorish soul and getting at little cost the admiration of an idiotic public.”

Maritain’s comment was made in 1952, six years before Father Martin Lam Nguyen was born, but it could as easily, and justifiably, be made of many artists today, though certainly not of Father Nguyen, CSC, who works in a roomy studio in the Holy Cross Annex, an old Quonset hut building in the scrub grove between the Holy Cross Cemetery and the north bank of Saint Mary’s Lake.

There are huge windows on the studio’s eastern wall, and one morning a few weeks ago, the studio was resplendent with anomalous winter sunlight. It also was so still that the occasional cascade of melting ice on the corrugated metal surface of the roof was startling; as if the sunlight itself were clearing its throat and demanding one’s attention. 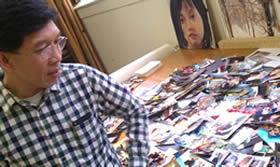 Father Nguyen seemed not to notice these scrapes and crashes, however. His attention was already focused elsewhere, specifically toward the studio floor and the wooden frame on which he was stretching and treating a massive canvas. Perhaps 7-by-5 feet, its surface was one of the 10 which would comprise his latest work.

It will take some time. As presently conceived, Neighbors, as Nguyen has tentatively titled his project, will not be complete until he has painted 17 rows of 14 individual portraits on each of these canvases, some 2,800 portraits in all. When he’s working at full tilt, he completes five of these miniatures a day. “I enjoy the work, but it can be very tiring,” he said.

“I’m better with images than with words,” he apologized, “but one way I could describe what I’m doing is getting at the question asked of Jesus in Luke’s Gospel: ‘Who is my neighbor?’ Oh, and also at the Zen expression that all past is present.”

The ensuing silence was again accentuated by the roar of melting ice outside as Father Nguyen stood up and turned toward the first of the canvases, which is nearly finished. “In some ways, this is what God sees.”

Hundreds of people looked out from the canvas in all directions, each selected from one of the thousands of photographs strewn about the studio, each studied beneath a magnifying glass, each sketched first in pencil and then painstakingly painted from the constellation of bright oils on the palette which lay on a nearby worktable.

The artist who had selected, studied, sketched, arranged and painted them there smiled as his glance darted from portrait to portrait, and a visitor, marveling at the simultaneous mass and specificity of all those faces and gazes, remembered what G.K. Chesterton said about Saint Francis of Assisi, how “he treated the whole mob of men as a mob of kings.”

Asked if he considered his work “religious art,” Father Nguyen shrugged. “I don’t know. I do know that I think of my ministry as a priest and my work as an artist as one and the same.” He smiled and added, “I sometimes say the rosary while I sit and look at these faces. It’s very calming.”

As do his previous works, Neighbors draws deeply from Father Nguyen’s own life. Many of the faces are those of friends and acquaintances. Anyone from the Notre Dame community or the Congregation of Holy Cross or St. Joseph County or the Diocese of Fort Wayne/South Bend or from the Vietnamese communities of Indiana and Michigan would surely recognize several faces. Some of the faces are drawn from funeral memorial cards, some are local celebrities, and some are from snapshots taken by Father Nguyen’s confreres in Uganda and Bangladesh.

The daunting scale and intricacy of this work in progress characterizes all Father Nguyen’s previous works as well. Mountain Waits, which he completed some 10 years ago, is a vast montage of 3,000 rice paper flags featuring ink and graphite images of the craggy islands of Ha Long Bay, a remembrance of Father Nguyen’s final glimpse of his native Vietnam from a fishing boat as he and his family fled the country in 1979. Face to Face, which he finished in 2007, is a series of 365 exhaustively etched drawings, each from a different photograph of one 5-year old girl, taken every day of the year from 2001 to 2002.

One of Father Nguyen’s brother Holy Cross priests, Father Nicholas Ayo, concisely described Face to Face as a “graphic litany.” It was easy to see something of that in this artist’s latest project, too, especially while standing in a Quonset hut studio in midwinter, where each abrupt calving of melting roof ice made the stillness rise up and surround its crash, as if any sound at all, any sight at all, any face at all, could be a prayer.